The Sound of Silence

“I will begin to speak when I have that to say which had not better be unsaid.”
— Cato the Younger

I’ve been thinking a lot about silence lately.

It was prompted by the scene during Queen Elizabeth’s funeral, as her coffin made its way through the streets of London, accompanied by the military and a single toll of Big Ben every minute.

I intentionally watched it unfold on The Royal Family’s YouTube channel, to avoid the Macy’s Thanksgiving Day Parade-style of endless commentary on the broadcast networks.

The sense of calm and quiet among the horde of onlookers was jarring.

We can learn a lot — about ourselves, about others — if we pay attention to the silence in our lives.

“Silence is one of the great arts of conversation.”
— Marcus Tullius Cicero

I wasn’t the only one who noticed the quiet aspect of the funeral. NPR’s Scott Simon tweeted:

TV commentators (no network named) say it’s so quiet you can hear a pin drop in the streets of London. We’ll, yes, if they’d let us hear the quiet.

I love some good irony.

But the great media machines seem tone deaf. Except for a select few.

The late Peter Jennings, longtime anchor for ABCs World News Tonight, said this of the live coverage of September 11th:

“We went into silent mode. It was not necessary for us to add our own anxiety or shock. I have always been conscious that there are times when some people on TV talk too much. Silence or natural sound on occasion is infinitely more powerful and relevant.”

How refreshing to simply be able to revel in the scenes and sounds of the world around us, without incessant jibber-jabber to distract us.

The Grand Gift of Silence

“You have a grand gift of silence, Watson,” said he. “It makes you quite invaluable as a companion.”
— Arthur Conan Doyle, 1891

By being silent, we bestow a gift on our audiences: the gift of being alone with their thoughts.

That tends to be a rarity these days.

And whether we are watching a televised funeral with no commentary, beginning our day with meditation, or turning off notifications and concentrating on our breathing, these are valuable moments.

In fact, recent research shows that keeping our phones in our pockets while we wait can improve our mood as we daydream, let our minds wander, or pay more attention to our surroundings.

Kahlil Gibran perfectly captures why our busyness and logorrhea may be a blockade to reflection in his classic work The Prophet:

“You talk when you cease to be at peace with your thoughts;
And when you can no longer dwell in the solitude of your heart you live in your lips, and sound is a diversion and a pastime.
And in much of your talking, your thinking is half murdered.
For thought is a bird of space, that in a case of words may indeed unfold its wings but cannot fly.
There are those among you who seek the talkative through fear of being alone.
The silence of aloneness reveals to their eyes their naked selves and they would escape.
And there are those who talk, and without knowledge or forethought reveal a truth which they themselves do not understand.
And there are those who have the truth within them, but they tell it not in words.
We seem to be always running to one thing or another—and in some cases, running from ourselves.”

It’s worth spending some quiet time on it.

“What you are stands over you the while, and thunders so that I cannot hear what you say to the contrary.”
— Ralph Waldo Emerson, 1875

Aside from giving ourselves time to reflect, holding our tongues can be a power move that allows us to find out the true measure of people.

When you’re in a meeting, pay attention to the quiet people. They know how to self-regulate and are taking in everything that’s going on. In fact, you might want to try being that person in meetings.

Similarly, if you maintain your silence and concede the floor to others, they might talk until they tire themselves out, give away a secret, or even get themselves into trouble.

Those quiet times are informative.

There’s one other silence that captured my attention last night, as I watched the first episode of the new Ken Burns documentary The U.S. and the Holocaust.

It was the lack of response to the pleas of European Jews who were being persecuted by the Nazis in the 1930s. It was a slow process, but as it gained momentum, the U.S.—as well as the rest of the world—avoided doing anything to help.

President Roosevelt couldn’t get Congress to make exceptions for immigration quotas. The head of the American Jewish Committee objected to public rallies in support of Jewish people overseas.

Meanwhile, in Germany and other German-controlled areas, the situation worsened, with disregard for norms and pledges of good faith, coddling of a dictator, deportations, property confiscations, and eventually, concentration camps.

That decade before World War II and the Holocaust gave us multiple moments in which we had the opportunity to speak up, and yet we didn’t.

The silence of the world then screams from the heavens now. 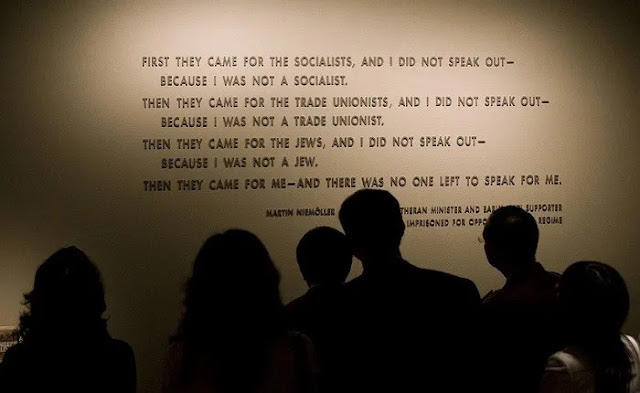 History has taught us a few things about personalities and human nature — particularly that we don’t change.

What a perfect time now to apply this thinking to the present day and consider what is and isn’t being said.

Settle your mind for a moment. Take a breath and close your eyes.

Do you hear that? The silence is speaking to you.

Now what are you going to do?