Being True to Your True Friends

“A prudent man, remembering that life is short, gives an hour or two, now and then, to a critical examination of his friendships. He weighs them, edits them, tests the mettle of them. A few he retains, perhaps with radical changes in their terms. But the majority he expunges from his minutes and tries to forget, as he tries to forget the cold and clammy loves of year before last.” — H.L. Mencken, 1922

How many true friends do you have?

By true, I mean the kind of friend who would drop everything if you were in need, who would defend you against the onslaughts that life sometimes sends, who is as much a part of you as one of your arms.

If you have a friend like this in your life, there’s something you need to do: tell them how much they mean to you, as soon as you can.

Because there are no guarantees that you’ll see them years from now or that the perfect moment will arise when you can express your appreciation. Make the moment.

We talked about timing recently.

I recently had a text from an old friend — a friend of over three decades — a friendship I had let lay fallow for half a decade.

The gap since our last chat was lengthier than usual, but it was not at all uncommon for six months or a years to pass between interactions; we don’t live anywhere near each other, and we’ve had competing priorities that have kept us on our separate paths.

In this case, I was prodded from my indolence with a Seinfeld video clip — the perfect instrument to incite action, as the show, which aired from 1989 to 1998, not only shared the timing of our friendship’s origin, but in many ways occupied our common language.

The straight jab of my friend’s name popping up on my phone caught my attention; he then hit me with a left hook of a video that nearly knocked me over with laughter: a perennial favorite of George Costanza that had been part of our code language since the episode’s first airing in 1993.

We texted back and forth for a bit before realizing a telephone communiqué was more in order.

You know where this story is going.

We picked up right where we left off, as if there was never a gap in our chats. We did the perfunctory updates: family, kids, work. Then we caught up on current events.

What struck me most about this part of our conversation wasn’t that our worldviews weren’t perfectly matched as they had been at one time; it was the give and take, the inquiry and debate, the curiosity and willingness to listen.

How much of that intelligent dialogue do we regularly experience any longer? How many of your “friendships” (and yes, friendships on social media require air quotes) help you grow and learn?

So much of our interaction happens over screens, and when the smartphones are out, the knives are out. The weapon of choice is a tweet, the wound inflicted is invisible, the victory notched by likes.

What do we accomplish with such digital warfare? The rush of dopamine may satiate an immediate need, but there are no lasting or redeeming effects. Tombstones don’t list impressions, mentions, or followers. And they certainly don’t tell your whole story.

When you’re gone, your memory will be carried on the shoulders of the reputation you leave behind, but it will also be shared by those whom you love and who love you.

The question is: do they know how you feel? Have you spent time demonstrating the importance of your friendship in actions and words alike?

Four years after leaving office, George Bush made sure Gerald Ford knew that he valued their friendship: 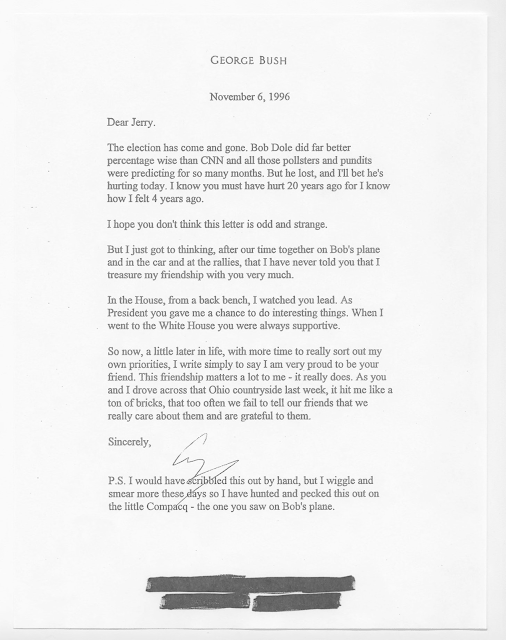 “So now, a little later in life, with more time to really sort out my own priorities, I write simply to say I am very proud to be your friend. This friendship matters a lot to me — it really does. As you and I drove across that Ohio countryside last week, it hit me like a ton of bricks, that too often we fail to tell our friends that we really care about them and are grateful to them.”

What a wonderfully expressed moment of friendship between two leaders—two friends— communicated from the heart.

How many true friends do you have?

How many of them have you told?

Thanks, and I'll see you on the internet.

👉 Premium Members receive an additional related essay, plus curated links, stories, and audio and book recommendations every other week. And the latest feature: regular Office Hours every week to explore a topic together.

Join the club by signing up below:
Posted by Scott Monty
Labels: leadership, timeless wisdom
at 11:20 AM