Leadership and the Dog in the Night-Time

“You know my method. It is founded upon the observation of trifles.” — Arthur Conan Doyle, 1891

Timeless & Timely has audio versions of the posts for you to enjoy. They are available to Premium subscribers. This one is available here: Leadership & the Dog in the Nighttime

Children’s imaginations are the playground for creative types.

Think about it: if we can imagine something, we can commit it to paper. And children are wonderful vessels for imagination.

They’re also refreshingly frank in their statements, and without the first smidgeon of shame, diplomacy, or regret, they’ll blurt out exactly what they think.

Obviously, we can’t regress to child-like behavior, but perhaps we can channel some of our inner child to capture the wonder that was so plentiful in our childhood years.

I grew up in a time when comic books were a normal and regular reading option. We didn’t have to go to a specialty comics store; we saw them displayed at newsstands and on carousel-style racks at the supermarket, readily available as an impulse purchase.

And inside the back cover of those comics were a series of classified ads—basically a display page of items you’d find at a joke shop or the Chuck E. Cheese rewards counter: Sea Monkeys, a Charles Atlas exercise brochure, or the inevitable X-ray specs. 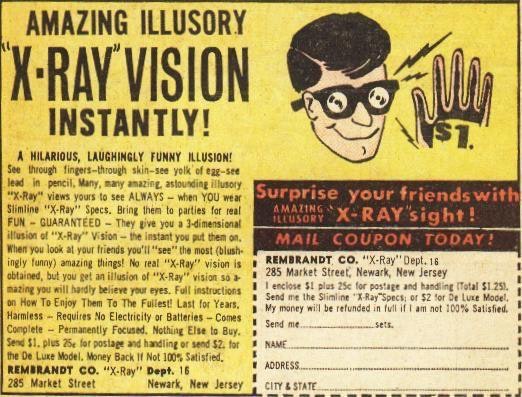 After reading a comic book about Superman and his amazing power of X-ray vision, I’d be captivated by the idea of seeing through solid objects. Now, I was never courageous enough to spend my hard-earned allowance on superpowers that were promised without any kind of serious technology (I was practical, after all), and besides, I wondered, what did the “De Luxe Model” offer for twice the price? Would I only be able to see halfway through things with the standard Slimline version?

But the idea of seeing things that other people couldn’t see appealed to me. It still does.

When you think about it, that’s what leaders do: they take note of things that mere mortals aren’t aware of—or at least aren’t willing to spend time on.

In the very first Sherlock Holmes short story, the detective asked Dr. Watson how many steps led up to their sitting room. Watson, who had trodden up and down them some hundreds of times, said he had no idea.

Holmes scolded him, saying, “You see but you do not observe. The distinction is clear.”

The answer, by the way, is seventeen.

How many times are we presented with analytics or data, but we don’t appreciate what they’re telling us? We miss the true impact because we’re not focused on the right thing—or perhaps because we’re distracted by something else.

Sherlock Holmes gets credit for being a master of deduction, but in order to excel at drawing conclusions, he needed to be a master of preparation and of observation. He paid attention to things, however small, that other people did not. That made him a valuable consultant to his clients.

And so it is that we need to prepare our eyes, ears, and minds to understand how our business and our teams are doing. And in that preparation, we’re acting with intention.

In “The Adventure of Silver Blaze,” Sherlock Holmes finds a wax vesta half burned and half-buried in the ground, so covered with mud that it looked at first like a little chip of wood.

“I cannot think how I came to overlook it,” said the Inspector, with an expression of annoyance.

“It was invisible, buried in the mud. I only saw it because I was looking for it.”

You’ve heard the phrase “a canary in a coal mine.” This is a metaphor for advanced warning of some danger. It originated from the times when miners used to carry caged canaries while at work. If there was any methane or carbon monoxide in the mine, the canary, being smaller and more sensitive to minor changes in the atmosphere, would die before the levels of the gas reached those hazardous to humans.

For example, when I worked at Ford, we knew that sales of Ford’s F-Series trucks were tied to the performance of the U.S. economy overall. The thinking is that since many small business owners and contractors buy the F-Series (the best-selling vehicle in the United States), they’re tied to home construction, which in turn is a factor in the economy.

While you’re busy drawing conclusions from the observable data, at the same time, what you’re not measuring can be more important than what you are measuring.

Back at work in “Silver Blaze,” Sherlock Holmes gave the local inspector a handy piece of advice that we can all learn from. As Holmes prepared to leave, the baffled Inspector Gregory asked,

“Is there any point to which you would wish to draw my attention?”

“To the curious incident of the dog in the nighttime.”

“The dog did nothing in the night-time.”

“That was the curious incident,” remarked Sherlock Holmes.

The point Holmes was making was that the intruder at the stables was someone who was familiar to the dog, which is why the canine didn’t make a ruckus during the course of the crime.

It’s the same concept as a black hole. Scientists can’t observe black holes directly. Telescopes that detect x-rays, light, or other forms of electromagnetic radiation can’t pick up a black hole. Instead, scientists study the effect of black holes on other matter nearby. Certain movements or the absence of something they were expecting can indicate the presence of a black hole.

Consider how you’re measuring progress your team is making after implementing a change. In addition to measuring the things that happen, another way is to measure what doesn’t happen: perhaps there are fewer calls to your customer service department, fewer returns at the store, or a shift of interactions with customers from phone to messenger bots. All of these indicate a change and can result in lower costs.

When dealing with a staff that is working remotely, you might pay attention to the things that people don’t say on calls or who aren’t speaking up. If you know your team well, these behaviors might indicate issues with which they’re struggling, and you can use that as an opportunity to check on them.

Indicators and clues aren’t always obvious — the proof of your success might not come directly from your own work, but from the impacts of how you notice what’s not there and how you treat other people.

You just need to know where to look.

As a follow up to this topic, we spoke with Len Herstein, author of Be Vigilant! Strategies to Stop Complacency, Improve Performance and Safeguard Success, and talked about Attentiveness.

👉 Premium Members receive an additional related essay, plus curated links and stories, and audio and book recommendations every Friday.

Join the club by signing up below:
Posted by Scott Monty
Labels: analysis, analytics, communication, employees, leadership, listening
at 6:32 AM