Do you know what’s going to happen tomorrow?

Well, you may have an idea of a general set of events or expected occurrences. The news media keeps us on alert so we can tune in, and our calendars attune us to where and when we need to make an appearance.

But beyond that, we can’t say with certainty that we know how things are going to work out.

The future is uncertain.

The past four years—and without doubt, the last year alone—have been fraught with the ups and downs of a reality TV show (admittedly, it has seemed like we were caught in the midst of one) as we’ve lived on edge.

But isn’t that the story of all history?

We don’t know how things are going to turn out for us, and neither did our ancestors.

When Dwight Eisenhower oversaw the planning for Operation Overlord in 1944, he had no way of knowing whether D-Day would be a success. In fact, he drafted a short note in the event of a defeat:

"Our landings in the Cherbourg-Havre area have failed to gain a satisfactory foothold and I have withdrawn the troops. My decision to attack at this time and place was based upon the best information available. The troops, the air and the Navy did all that Bravery and devotion to duty could do. If any blame or fault attaches to the attempt it is mine alone."

As the first three humans were set to land on the moon and safely return in 1969, we had no way of knowing whether NASA would be able to pull it off. Speechwriter William Safire prepared a speech for Richard Nixon titled "IN THE EVENT OF MOON DISASTER."

When we were making digital and social media progress at Ford, we didn’t have a road map; we paved the road behind us.

The point is, it is only upon looking back that we have certainty; looking forward, nothing is guaranteed.

I write a lot about history here. And it’s more than a hobby or side interest to me. History is the study of human nature, of character.

And character is what shapes our future.

The ancient Greek philosopher Heraclitus said, “character is destiny.”  It was his supposition that fate is not some predetermined outside force (as much as Greek mythology credited the Moirae), but that our future is determined by our inner character.

Character defines who we are, and part of knowing who we are is knowing where we came from.

Our family gives us a strong sense of values; our education provides us with facts and (with any luck) the ability to think critically; the corporate history of our company tells a story of how and why the company came to be.

Those looking to make change—particularly in uncertain times—will often encounter someone of long tenure at a company dissuade them from disrupting things with one simple and dismissive phrase:

“We’ve always done it that way.”

“We’ve always done it that way” is the shield behind which the fearful cower. It’s an excuse for avoiding a difficult decision. It is the plea of someone who needs a roadmap in unfamiliar terrain.

If you’ve always done it that way, then you’ll continue to get the same results. [Tweet this!]

And if you’re satisfied with the same results, want to avoid conflict, and wait for the world to change you rather than you changing the world, then by all means, keep doing things the same way.

Risk-taking, fearless leadership, transformational change—all of these things are part of a company’s (or family’s) culture—and we need to live these values as well as talk about them.

Even though we may be predisposed to shrink from a crisis or to avoid a seemingly insurmountable task—uncertain as they are—it is the very act of meeting them head-on that calls out our character, and therefore our destinies.

When John and Abigail Adams sent their son, John Quincy Adams, across the Atlantic to study in France, he was just 12 years old. The year was 1779 and America was at war. Transatlantic travel in a leaky boat was anything but a sure thing.

But the Adamses wanted their son to have an opportunity to associate with Benjamin Franklin and political philosophers in France and to gain from experience, as uncertain as it was.

In one of her letters to her son, Abigail Adams reminded him that unfamiliar and uncomfortable scenarios help us become who we are meant to be:

“The habits of a vigorous mind are formed in contending with difficulties... Great necessities call out great virtues.” [TWEET THIS]

When faced with uncertainty, the character you display, either overtly or blatantly, tells others everything they need to know about you.

Deep down, you already know it to be true.

Joining us this week on Timeless Leadership is Carey Lohrenz, the first female F-14 Tomcat pilot and author of Span of Control: What To Do When You're Under Pressure, Overwhelmed, And Ready To Get What You Really Want.

We’ll be talking about Control — how leaders respond amid uncertainty, how to remain flexible and comfortable, and control as much as we can in an uncertain world. 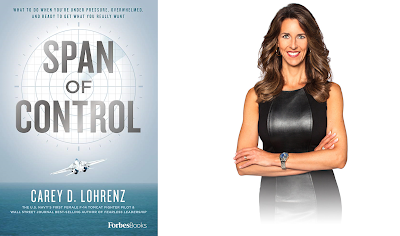 Set a reminder to join us live at 12:00 pm EDT on Fireside Chat and be sure to follow the show on Apple Podcasts or wherever you get your podcasts.

👉 Premium Members receive an additional related essay, plus curated links and stories, and audio and book recommendations every Friday. And they get an audio version of this essay. Join the club by signing up below: