The Social Element of Humor

Has anything funny happened to you in the past week?

Maybe it was a video you watched online, something a friend said to you, or even something about yourself that you laughed about.

But consider this: how much of that laughter occurred in the company of others?

Humor, like air, cannot exist in a vacuum. It needs fellow humans to exist. Even if you laugh at a pet, you may be reacting to a certain human-like expression or quality you perceive in it.

Henri Bergson, in his book Laughter: An Essay on the Meaning of the Comic,  makes the case for humor as a shared experience:

“A man who was once asked why he did not weep at a sermon, when everybody else was shedding tears, replied, “I don’t belong to the parish!” What that man thought of tears would be still more true of laughter. However spontaneous it seems, laughter always implies a kind of secret freemasonry, or even complicity, with other laughers, real or imaginary. How often has it been said that the fuller the theater, the more uncontrolled the laughter of the audience!”

That secret society—that tacit shared experience—gives us a sense of security, a feeling of relief that our fellow members and friends understand why we’re laughing. More than that, they understand us.

And we all want to be understood.

Have you ever tried to stifle your laughter when you were in a social situation that required solemnity? In a classroom, in church, or maybe at a funeral service?

Invariably, you were with other people. People with whom you had a shared affection and who could understand why you might be laughing.

Throughout the pandemic, we’ve experienced various degrees of social isolation. Some have been cut off from members of their family for long periods of time. Many have been working from home. And this isolation means we don’t have the same opportunity to love and laugh together.

Video calls have provided a modicum of solace for that communal feeling, but the digital doppelgangers we see on the screen are merely bits and bytes masquerading as their carbon counterparts. Not to mention the inevitable screen fatigue we’ve experienced.

In short, we need to be in each other’s company again to experience the laughter and joy that was once taken for granted.

“Well, humor is the great thing, the saving thing, after all.”

There’s a place for humor at work. We don’t need to be serious constantly.

Being funny at work isn’t as much about a quip or witty remark as it is about lightheartedness. When we find shared moments of levity, we develop a closer bond with those who are with us.

However, humor doesn’t work when it is directed at someone else like an individual or a group of people. A cutting remark that uses someone else as the punchline or the target of a joke is not a joke at all.

One of the shared values at Ford in my time there was:

“Enjoy the journey and each other; have fun—never at others’ expense.”

When someone says something offensive and others react with shock or horror, you may have witnessed the knee-jerk, self-protective reaction: “It was a joke!” or “Can’t you take a joke?”

If you have to explain that something is a joke or you criticize the reaction to it, it’s not a joke.

Humor works best when it is shared. [Tweet this]

“To understand laughter, we must put it back into its natural environment, which is society, and above all must we determine the utility of its function, which is a social one.”
— Henri Bergson, 1900

Earlier this week, the CEO of Basecamp posted a memo aimed at internal culture (posted publicly for all to see) that has since come under fire. On the surface, it seems to be representative of the debate about corporate “wokeness”.

However, according to a deeper investigation, it goes beyond the political and edges into humor: employees say the founders’ memos unfairly depicted their workplace as being riven by partisan politics, when in fact the main source of the discussion had always been Basecamp itself.

It started with a list of “funny” customer names in 2009. Fast forward to today:

“More than a decade later, current employees were so mortified by the practice that none of them would give me a single example of a name on the list…Many of the names were of American or European origin. But others were Asian, or African, and eventually the list — titled “Best Names Ever” — began to make people uncomfortable.

Life in 2021 is different than it was in 2009, and there are forms of behavior, in the workplace as well as in social life, that are less acceptable or tolerable than they once were.

“In a response to Hansson’s post, one employee noted that the way we treat names — especially foreign names — is deeply connected to social and racial hierarchies… The point was that dehumanizing behavior begins with very small actions, and it did not seem like too much to ask Basecamp’s founders to acknowledge that.”

Our smallest actions indicate our deepest beliefs. When we think something isn’t important or we use the emotional write-off “it’s just a joke,” we’re denying the dignity of others.

Always remember the golden rule of humor in the workplace:

If you’re not yet subscribed to Timeless & Timely, here's your chance: right now, Premium membership is FREE for 60 days.

Tomorrow, in the live recording of Timeless Leadership, I’ll be chatting with Kathy Klotz-Guest on the topic of Humor. 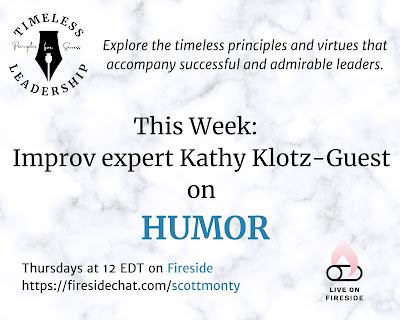 We know humor when we see it, but it’s one of the most difficult forms of communication out there. We need to have fun together in the workplace, and Kathy is well-positioned to help us understand how to make it happen.

Join us at 12 pm EDT on Thursday, April 29 on Fireside Chat.

If you can’t make it to the live show, then please hit the subscribe button on the podcast player of your choice to Subscribe to Timeless Leadership.