How Did We Get Here?

“Whatever the apparent cause of any riots may be, the real one is always want of happiness.”

As much as history can inform our understanding of the present, we’re never quite prepared for a crisis.

We can point to events and behaviors that presaged certain crises, and perhaps we can even pick them out today, but when a situation becomes acute, it seems to happen all at once and takes people by surprise.

Well-trained corporate communications teams participate in crisis planning and usually have a crisis plan or handbook at the ready when they need to snap into action. In the digital age, those tend to gather dust, as crises now depend on the speed of response and a well-tuned instinct.

There was a crisis brewing in the winter of 1776. It was on this occasion that General George Washington pulled out a handbook of his own: the appropriately-named collection of soul-stirring essays by Thomas Paine titled The Crisis.

Published on December 19, the timing couldn’t have been better (or tighter), as public opinion was mounting and troop morale was flagging. It was still early in the American Revolution, and its cause was on life support.

Washington’s troops were on the verge of quitting when, on December 23, he had the pamphlets read to his men, including this rousing opening line:

“These are the times that try men’s souls: The summer soldier and the sunshine patriot will, in this crisis, shrink from the service of his country; but he that stands by it now, deserves the love and thanks of man and woman.”

Fortified in spirit, Washington’s forces crossed the Delaware River and attacked a Hessian garrison on the night of Christmas Day, as the Hessians were still in a drunken stupor from celebrating. It was a badly needed victory that changed the course of the war.

“Many signs point to a growing historical consciousness among the American people. I trust that this is so. It is useful to remember that history is to the nation as memory is to the individual. As persons deprived of memory become disoriented and lost, not knowing where they have been and where they are going, so a nation denied a conception of the past will be disabled in dealing with its present and its future.”
— Arthur M. Schlesinger, Jr., 2007

With any crisis, there are certain steps a leader should take to forge a path ahead.

Determine what the crisis actually is. Gather the facts.

There’s a limit to what you can control in a crisis, but if it’s a crisis of your own making (that is a policy position or business process), then stop doing what caused the crisis in the first place.

The worst thing in a crisis is silence. It allows observers to reach their own conclusions and fill the silence with their own narrative. Leaders should be out front, keeping stakeholders up to date with information on what they know and what they’re doing. In fact, it’s safe to over-communicate in such circumstances.

Because the public looks to hold those in power accountable, leaders should accept responsibility for crises. Without accountability, the situation will continue to fester. From there, leaders can announce what they’ll do differently.

What we’re witnessing is the classic cycle of an abuser after causing pain. Upon being called out, they resort to DARVO: deny, attack, and reverse victim and offender. Suddenly, you’re the one who’s causing disunity by not wanting to move on.

Imagine if, in the throes of the Exxon Valdez oil spill or the Volkswagen diesel emissions scandal, that executives denied their responsibility, attacked those who uncovered it, blamed the media for cancel culture, and told the public to just shut up and deal with it.

Yeah, I'm shaking my head too.

How did we get here?

Only when a crisis has passed is it time for a clear-eyed assessment about what caused the scenario to play out as it did. It can be a painful, soul-searching step, but it’s required if we want to avoid a similar crisis playing out in the future.

In America: What Went Wrong?, a 9-minute talk by Michael Smerconish—an excerpt from his hour-long speech on the media’s role in the rise of partisanship, increase of polarization, and ultimately, the recent attempted coup in Washington—looks at the prevailing forces that have conspired to make us as polarized as we are: a setting that made January 6 almost inevitable.

One thing in this talk that stuck out to me is his thesis that the media’s priorities changed along the way. Networks went from having shows that were personality-driven to being ideologically-driven. It went from kind of a thinking-person’s entertainment to an unthinking person’s blood sport—like professional wrestling.

“Very well. So the universe is not quite as you thought it was. You’d better rearrange your beliefs, then. Because you certainly can't rearrange the universe.”
— Isaac Asimov, 1941

Ultimately, the state of mind of any group of people—the public at large, your employees, your working group, your family—particularly in the midst of a crisis, depends on everyone agreeing to the first step in crisis management: acknowledging reality.

A leader is responsible for communicating the reality, however harsh it is, to their people. Otherwise, everyone is in for an unpleasant surprise.

Les Énervés de Jumièges (the enervated men of Jumièges) by Luminais is also known as The Sons of Clovis II. According to legend, when two of Clovis II’s sons dared to rise up against him, he had them hamstrung and set adrift in the Seine.

Every week in the Friday newsletter, I give subscribers more material related to the topic of the essay, including a book. This week, I have an additional book to recommend. 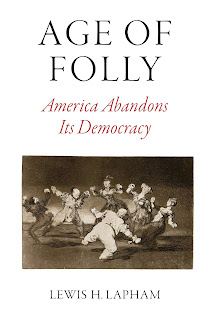 From the dust jacket:

In twenty-five years of imperial adventure, America has laid waste to its principles of democracy. The self-glorifying march of folly steps off at the end of the Cold War, in an era when delusions of omnipotence allowed the market to climb to virtual heights, while society was divided between the selfish and frightened rich and the increasingly debt-ridden and angry poor. The new millennium saw the democratic election of an American president nullified by the Supreme Court, and the pretender launching a wasteful, vainglorious and never-ending war on terror, doomed to end in defeat and the loss of America’s prestige abroad.

All this culminates in the sunset swamp of the 2016 election—a farce dominated by Donald Trump, a self-glorifying photo-op bursting star-spangled bombast in air. This spectacle would be familiar to Aristotle, whose portrayal of the “prosperous fool” describes a class of people who “consider themselves worthy to hold public office, for they already have the things that give them a claim to office.”

This story continues on Friday with some commentary about our post-truth world, for members of the paid subscription tier only.

👉 Members receive an additional essay, plus curated stories, and audio and book recommendations every Friday. Join the club by signing up below: