God Shed His Grace on Thee 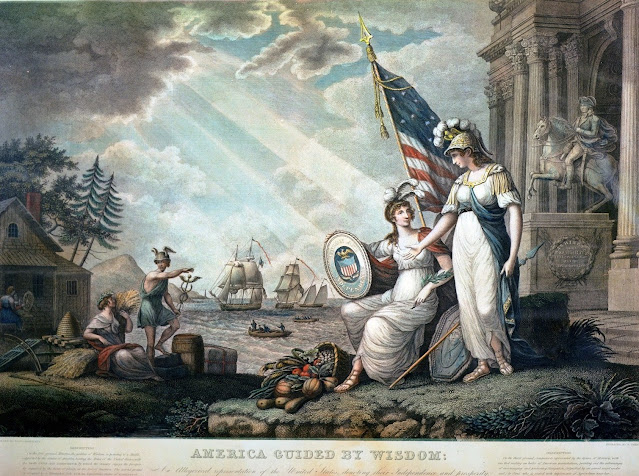 America Guided by Wisdom: An allegorical representation of the United States depicting their independence and prosperity by John James Barralet, 1815 (public domain — Library of Congress)

“If you are ferocious in battle, remember to be magnanimous in victory.”
— Commander Tim Collins, 2003

As children, we learn that there’s no honor in being a sore loser.

We’re taught to shake hands and wish our opponents well, even if it means feigning happiness or enthusiasm for them.

But we also learn there’s no honor in being a sore winner, either.

No one likes someone who gloats, makes merry or rubs it in at their opponent’s expense.

These simple examples are representative of the concept of grace.

Grace has a number of definitions, from the more physical, meaning elegance of movement, to the religious, signifying the favor of God.

For our purposes, let’s focus on the definition of grace that means courteous goodwill. Magnanimity, if you will.

I’m reminded of the three Graces of mythology—the three daughters of Zeus and Hera: Aglaia (Brightness), Euphrosyne (Joyfulness), and Thalia (Bloom). Together, they were considered goddesses of charm and beauty.

To be able to wish an opponent well after a long and hard-fought battle takes charm. It takes grace.

And yet, we’re not always able to muster that strength.

Being magnanimous is a show of strength, not weakness—much like vulnerability and humility (leadership qualities we’ve discussed here previously). It takes a person with real character to cross that aisle and shake the hand, or to wish the other well, and to do it sincerely.

This? This is an example of the opposite:


This is what the people of North Carolina elected last night.

And while our election may seem like one of the most contentious, one of the most hard fought in recent history, it pales in comparison to the time our nation went to war against itself, losing nearly 620,000 men to the cause.

The war contained some of the most bloody battles in our nation’s history. At Gettysburg alone, there were over 7,000 deaths plus another 33,000 or so injured. At Little Round Top on that first day of battle at Gettysburg, Colonel Joshua Chamberlain led the efforts to hold the high ground. He became known as “Lion of the Round Top,” and thanks to his leadership, the 20th Maine regiment fended off the area from rebel forces with valor; had they not, the outcome may have been quite different.

But his truest act of leadership came two years later, when Col. Chamberlain was present in Appomattox when Confederate General Robert E. Lee surrendered to General Ulysses S. Grant. When the defeated rebels paraded past, Chamberlain ordered Union troops to dip the regimental colors as a sign of respect for a beaten foe.

What Chamberlain did, after all the blood, the years of fighting, in the wake of 618,000 deaths, made reunification a possibility.

“We are not enemies, but friends. We must not be enemies. Though passion may have strained, it must not break our bonds of affection. The mystic chords of memory will swell when again touched, as surely they will be, by the better angels of our nature.”
― Abraham Lincoln, 1861

Ronald Reagan called America “the shining city on a hill.” He appealed to the hopes and dreams we share, appealing to our “better angels,” as Abraham Lincoln called them.

Lincoln’s quote above is taken from the closing line of his first inaugural address. Lincoln, if you'll recall, was the surprise nominee, from amid a field of candidates that included the old guard, such as William H. Seward, a former governor of New York and United States Senator; Salmon P. Chase, governor of Ohio; and Edward Bates, a former member of the U.S. House of Representatives. Lincoln secured the nomination, went on to win the general election, then in one of the most magnanimous gestures—a political masterstroke—he named these men to his cabinet.

This “team of rivals,” as they became known, was more invested in the country’s and Lincoln’s success rather than tearing it down and working against him. By extending a kind hand and showing them the grace that he thought they were owed, he got their loyalty.

The history of our country is filled with events and gestures, both small and large, written by men and women who were both petty and magnanimous, but who, were all imperfect humans.

Humans who need to ask for God’s grace as well as the grace of each other.

In closing, I’d like to consider some of the lyrics from the well-known anthem “America the Beautiful,” as perhaps an key to what our country is crying out for right now.

The lyrics were adapted from a poem first written by Katharine Lee Bates in 1893 and set to music by Samuel A. Ward (incidentally the organist at Grace Episcopal Church in Newark) posthumously in 1903.

You know how it goes:

“O beautiful for spacious skies, / For amber waves of grain.”

The refrain in each verse begins with “America! America!” and then there are three different variations:

“God shed His grace on thee
And crown thy good with brotherhood
From sea to shining sea!”

“God mend thine every flaw,
Confirm thy soul in self-control,
Thy liberty in law!”

“May God thy gold refine,
Till all success be nobleness,
And every gain divine!”

Each of those refrains is not a statement of what has happened or what is in place. “God shed his grace on thee” isn't something that God already did.

Those are wishes. Plaintive pleas. An appeal to our better angels.

We’re looking for grace. We need our flaws to be mended. We should share the succor of our successes.

This is a great journey that we’re on, and we share the road. In so doing, we owe one another the best of what we have to offer, regardless of circumstances.

We should practice being gracious.

Particularly to those whom we’ve delivered a setback. Because we are not enemies, but friends.

God shed his grace on thee.

If you become a subscriber, you'll get part 2 of this topic, including three timely links, three timeless stories, and a recommended book and podcast.

This originally appeared in the November 4 issue of the Timeless & Timely newsletter.
Posted by Scott Monty
Labels: competition, leadership, timeless wisdom
at 6:59 AM