"Could a greater miracle take place than for us to look through each other's eye for an instant?"
— Henry David Thoreau, 1854

Empathy seems to be in short supply these days. The ability to say "I see you and understand what you're going through," and the willingness to attempt think like others seems like a lost art.

Why do you suppose that is?

I have a theory myself, but before I share that with you, let's take a quick look at what empathy is how it's different from sympathy, and why it's a fundamental of good leadership.

The words empathy and sympathy both derive from the Greek root pathos, meaning "suffering" or "experience," and is a technique in rhetoric (along with ethos and logos) as a way of evoking emotion. The origin of sympathy goes back about 450 years, from the Latin sympathīa. Empathy came along in the early 1900s via psychology researchers and the Greek word empátheia, meaning "affection."

Empathy is the ability to experience the feelings of another person. It goes beyond sympathy, which is caring and understanding for the suffering of others. Both words are used similarly and often interchangeably (incorrectly so).

As I was thinking about this, struggling to put into words what the difference is, an apt scenario presented itself. Upstairs, my six year-old daughter was running in the hallway when she tripped and hit her head. I immediately rushed to her side, showing her that I felt badly for her (sympathy). As I comforted her, I told her I knew how much it hurt, because I've hit my head before (empathy).

The feeling of sympathy arises when we recognize another person's suffering, as opposed to empathy, where the other person's pain or suffering is felt. You express sympathy but you share empathy.

Because of the shared feeling, empathy is deeper. That's not to say that sympathy can't be just as heartfelt. But empathy has the power to create a deeper and more meaningful connection, serving as a bridge for greater communication between individuals or between a leader and their team.

"Leadership is not so much about technique and methods as it is about opening the heart."

The ability to create a deeper relationship with people is an essential element of leadership. After all, leaders aren't creating things; they're managing people. They're helping create the next generation of leaders.

A boss thinks in terms of "me," while a leader thinks of "we."

A boss will take credit or blame others, while a leader will give credit and shoulder the blame.

A boss issues commands, while a leader asks and listens.

A boss depends on the authority of the job title, while a leader leans on the entire team and builds mutual accountability and trust.

If a leader is doing her job effectively, she's able to bring people along with her, leading from the front, rather than pushing from behind. This is not only done by rolling up your sleeves, but by demonstrating to your people that you understand their challenges because you've been in their position yourself.

"If you wish to persuade me, you must think my thoughts, feel my feelings, and speak my words."

Empathy is a cornerstone of emotional intelligence, or EQ, which is the ability to identify, evaluate, control, and express emotions. It's not only for leaders, but good leaders are emotionally intelligent. They're self-aware, reflective, and understand how others feel.

The psychologist C. Daniel Batson has studied empathy and discerned eight distinct concepts that are related to it:

Each of those elements, if properly expressed, leads to deeper trust, better communication, and deeper relationships.

“Acquire the habit of attending carefully to what is being said by another, and of entering, so far as possible, into the mind of the speaker.”
— Marcus Aurelius, c. 180

We often hear of companies that say they're "customer-centric." They go out of their way to convince us that they "put the customer at the center of everything [they] do." And yet, when dealing with such companies, how often have you run into a scenario where it's pretty clear that the customer is not at the center?

I've often seen a disconnect between executives and customers. This is one reason (once upon a time) I was excited about social media as a business intelligence tool: it allows executives, who might be otherwise outside of the typical customer interaction, to hear from the people who experience their products. It gives them a chance to listen with empathy.

It's human nature to be so engrossed in our own activities, our own points of view, that we simply march forward, intent on making ourselves heard rather than truly hearing and understanding what other people are going through.

"If there is any one secret of success, it lies in the ability to get the other person's point of view and see things from his angle as well as your own."

Everyone you meet and interact with has a backstory. They have things going on in their lives that are complicated and unseen, things that color their disposition and interactions. How often are we aware of these?

The Cleveland Clinic brought this concept to life in a video about empathy:

The theory I mentioned above, as to why we're at a low ebb in empathy? I think it's because of a rise in technology. Screens have put distance between us, making our avatars into stand-ins on the great stage of life, mouthing disembodied invectives and threats, as we become less personable on impersonal platforms.

Medicine is the perfect industry to illustrate what we need right now—a caring human touch, equally applied to everyone.

As a society (at least here in America), we seem to be stuck on individualism and selfishness, rather than a feeling of collective good. The prevailing attitude is no longer E pluribus unum, but

"You're not the boss of me." It's what seems to drive the anti-maskers, who are determined to do what they want, science and consequences to others be damned.

When we lose our ability to think of others first, we lose our humanity. Regardless of your religious inclination, Jesus had some sound advice when asked what the most important Commandment was. After paraphrasing the Torah and reminding people to first love their god, he followed up with a second one that he indicated was equally as important: "Love thy neighbor as thyself."

It shouldn't be that difficult.

The Democratic National Convention in the past two nights has focused on empathy and leadership. Touching and powerful videos have shown how Joe Biden has empathy for people he meets. His personal story involves losing a wife and 15 month-old daughter in a tragic automobile accident weeks after his first election to the Senate, and him continuing to go to work, befriending people on the train as he made his way between Delaware and Washington, insistent that he be home every night for his two young sons.

It should be no surprise then, to see an image of a memo that Vice President Biden shared with his staff regarding their commitment to their jobs versus to their families: 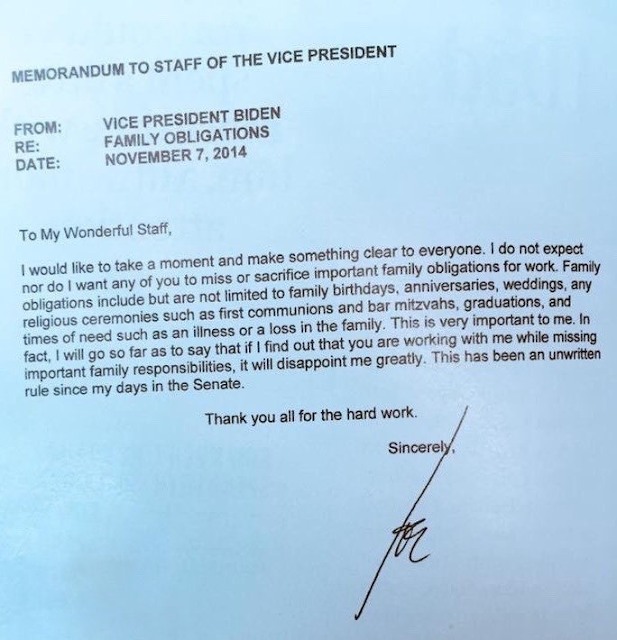 This is what an emotionally intelligent leader looks like.

Ultimately, empathy only goes so far; what we do with it is what makes leaders great. Give your people something tangible and actionable.

The first step, however, is a willingness to perform the miracle of looking through another's eye.

"John Lewis said 'When you see something that is not right, you must say something. You must do something.' That is the truest form of empathy: not just feeling, but doing; not just for ourselves or our kids, but for everyone, for all our kids."

This originally appeared in the August 19 issue of the Timeless & Timely newsletter. What are you missing? To see this issue in its entirety, with entertaining and thoughtful links, recommendations, and more, please click here.
Don't miss a single issue:
Posted by Scott Monty
Labels: authenticity, behavior, C-suite, communication, customer experience, emotional intelligence, empathy, humanity, listening, timeless wisdom
at 2:50 PM