There’s a very human tendency to cling to what’s familiar — to keep up a process or tradition because “we've always done it that way.”

It’s so powerful a notion that in many boardrooms and whiteboard sessions, it’s used as a reflexive force field, to shield the team and the corporation from looming change. A new approach is greeted with “Nope, sorry. That won’t work. We’ve always done it this way.”

Consider our attachment to monuments and the current debates happening about them, as we reassess what they stand for. One camp is interested in removing anything object or representation that doesn’t square with our modern sensibilities and the other is steadfastly clinging to the past, right or wrong.

Does a physical object determine our beliefs? Can it teach us history?

A statue or monument certainly isn’t an advanced history lesson, but it does tell us something about our history as a society, if not the events or people it represents. It’s a snapshot in time rather than a fully fleshed out story—the difference between what happened and what we tell each other happened.

Lewis H. Lapham eloquently wrote about the recorded past versus the remembered past:

Ultimately, it’s about keeping a set of stories alive. Consider how the Iliad and the Odyssey made their way to us today, first as part of the oral tradition and then codified in writing.

When it comes to physical monuments, they tell us a great deal about ourselves, about our priorities at the time they were built, rather than about the events or people they symbolize.

“If there is one lesson to be learned from studying how monuments get chosen and built, it is that they most certainly do not represent history in any straightforward or responsible way.”
— Kirk Savage, 2018 (“Making Monuments What They Ought to Be”)

Prof. Savage says that monuments tell us more about who made the decisions to build them and the times in which they lived. For example, the Emancipation Memorial, a sculpture of Abraham Lincoln and a freed slave on his knees, was dedicated in 1876 after funds were exclusively raised by emancipated citizens, yet “a committee of white philanthropists in St. Louis controlled the money and decided on the artist and design without ever consulting their funders.”

The current debate began with monuments to leaders of the Confederacy. When you stop to think about it, it’s just plain crazy that we had statues honoring men who were traitors and who tried to bring down the country.

We hear the plaintive cries of “history” and of “heritage” that inevitably follow. But the facts remain. Most of these weren’t built in the years following the war to honor its history, but decades after the Civil War ended, at a time when the country looked like it was making racial progress. And honoring traitors isn’t part of the heritage of any other country. 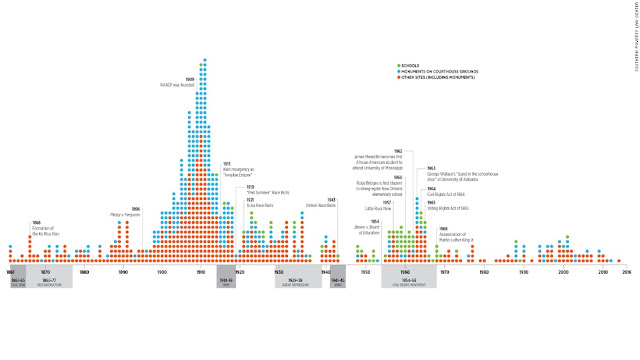 What about other monuments to leaders who exercised questionable judgement? Leaders like George Washington or Thomas Jefferson, who both owned slaves, and of others who may not live up to our standards today, are now being called into question.

“No one monument could be made to tell the whole truth of any subject which it might be designed to illustrate.”
— Frederick Douglass, 1876

This is where things can get problematic. If you dig deeper into things like women’s rights, gay rights or civil rights or other issues that are important by today’s standards, you’re going to find faults with every single leader of the past.

As presidential historian Doris Kearns Goodwin says, “we need to cut the past some slack,” understand these figures, and get perspective on them.

I often think that if I weren’t a communicator and a marketer, I’d be a historian. For what is a historian, but a storyteller? It’s the historian's job to understand the past and put some context around it.

That’s your job as a leader. To put context around strategies, decisions, and initiatives. You’re the chief storyteller who weaves a narrative for your employees and gets them excited or informed about the why behind the what.

Vainglorious leaders spend too much time worrying about their legacy. They hope to be remembered for the mark they leave on the world — for some, these things occupy their every waking moments.

We’d like to think our legacy assumes some permanence, as expressed in concrete, marble or steel, but in “Ozymandias” Shelley reminds us such things are temporary:

“Nothing beside remains. Round the decay
Of that colossal Wreck, boundless and bare
The lone and level sands stretch far away.”

True legacy — the legacy that matters — isn’t one that’s set in stone or on balance sheets. Your legacy will be in the stories they tell about you. It will be carried on by employees long after you've left the company, who remember you fondly for the way you made them feel.

Christopher Wren’s quote at the top of the essay (“Si monumentum requiris, circumspice”) is Latin for “If you seek his monument, look around you,” and is set in a great circle in the floor directly under the dome of St. Paul’s Cathedral, his masterpiece.

The beauty of the placement is that when you do look around, you see not the Wren crypt but the whole glorious structure that he created. An architectural wonder that does more than honors his memory: it brings joy, instills wonder, and inspires awe to all who visit there. It’s a monument, but not to Wren; it's a monument to our relationship with God.

At home, your family won’t remember you for your work achievements, nor for the headstone or mausoleum built to mark your final resting place. They’ll remember you for the love you show and the moments you share together. In short, for the joy, wonder and awe you bring them.

Your monument will be built on the relationships you nurture.

As the cast sang in Hamilton, who lives, who dies, who tells your story?

This originally appeared in the July 15 issue of the Timeless & Timely newsletter. What are you missing? To see this issue in its entirety, with entertaining and thoughtful links, recommendations, and more, please click here.
Don't miss a single issue:
Posted by Scott Monty
Labels: C-suite, culture, employees, humanity, leadership, life, reputation, storytelling
at 9:51 AM