"Nobody ever discovered ugliness through photographs."
— Susan Sontag, 1973

In the age of the ubiquitous selfie, we fix our gazes on tiny screens filled our own images. But how many of us are reflecting on ourselves rather than solely on our reflections?

Like water skiers, we skim along the surface, staying afloat for as long as we keep moving swiftly.   With enough practice, we can weave in and out of the wake, launch ourselves off of ramps, and even learn to slalom or barefoot ski.

But the moment the boat slows and the line slackens, we find ourselves sinking into the water.

As we flit from site to site and find ourselves mesmerized by the infinite scroll, digital life has given us the ability to avoid confronting the realities of our lives: we fail to address our inadequacies. We ignore our deepest fears.

This is simply human nature.

We often don't know we're being deceived though. When the veil is lifted, we're forced to face reality, in all of its ugliness.

Recently, I had a friend (one who works in a hospital setting) disclose that he was suffering from COVID-like symptoms. He went in for testing and they discovered a previously unknown heart condition that required urgent treatment.

In an update after one of his medical appointments, he said his doctors told him the coronavirus, while not always presenting with the same symptoms, has been making underlying conditions more prevalent. In other words, if you suffer from some other unrelated health malady, COVID-19 can cause the other afflictions to suddenly flare up.

This is analogous to the economic impacts we're currently observing here in America: the coronavirus didn't break us; it revealed what was already broken.

In other moments of national crisis, we had opportunities to unite behind a common cause. September 11 was a sudden and acute crisis that drew us closer together for a relatively short span of time; World War II lasted four years and required much greater sacrifice over that period.

Today, with an invisible enemy on slow roll through our country, it's difficult for people to see the same kind of urgency—especially when their economic future (and present) is at stake. Many citizens are concerned with their physical health, but their economic health concerns are rearing up.

Coupled with the rise of fierce individualism we've seen in the past decade or so, it has exposed a pathological lack of empathy in those who refuse to wear masks in public places—an act that not only protects them, but more importantly, protects others.


Our economy was supposed to be strong, yet on average, Americans have about $8,800 stashed away in savings (it varies by age). Without jobs, and a rising unemployment rate, we can see how vulnerable we've become.

And it's not just individuals that are teetering on the brink. If we look across industries—even industries that were seemingly booming previously—there are now major concerns.

In its latest earnings call, Disney announced it lost $1.4 billion in Q1; 70 percent of the impact was from its theme park division, which has been shuttered because of the pandemic. Parks represented a profit center for the company, allowing it to run thinner margins in other areas. But Disney also has retail stores, cruises, stage shows, and studios, all of which have closed.

While we're on the subject of the entertainment industry, the future of movie theaters is in question. With so much streaming happening at home, including releases of new movies, who's going to want to endure a TSA-style check-in at a movie theater versus the comfort of their own couch? With more Americans concerned about finances, a $10 ticket plus a $15 popcorn and soda combo, together with the hassle of getting to the theater and potentially exposing yourself to other Covid-carrying theater-goers, seems like a non-starter.

Cruise lines, which were at the center of the outbreak, are on the ropes as well. Norwegian Cruise Lines warned that it might not withstand the shutdown (but has since raised $2 billion to tide itself over for a year). That assumes people will want to return to "normal." In an informal Twitter survey, it's not clear that such is the case: 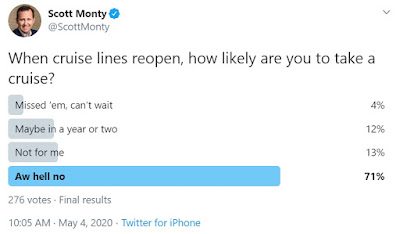 Retail, another sector that struggled with meeting consumer expectations in recent years, is also in for a world of hurt. J. Crew filed for bankruptcy this week; Nieman Marcus and Lord & Taylor are also on the watch list. With so much real estate under them and tens of thousands of smaller retailers poised for a similar fate, mall owners are bracing for the worst.

The gig economy delivered fast, convenient and relatively inexpensive services to us in the last half decade. Upstarts negatively impacted the taxi, hotel, and restaurant industries. Now along with those industries, the gig companies—unicorns, grown by intense venture capital, insane valuations, and a structure that conveniently absolved them of offering benefits to workers (don't say employees, please)—are on the defensive.

Airbnb is cutting 25 percent of its global workforce (in a thoughtful and heartfelt message from CEO Brian Chesky). Uber is laying off 3,700 employees, or 14 percent of its workforce. Not to mention the harsh impact on American cities as a whole.

Air travel, higher education, healthcare, manufacturing, conferences—I could go on. There's hardly a corner of the economy that isn't affected and exposed for what it is during this crisis.


"Vanity is the natural weakness of an ambitious man, which exposes him to the secret scorn and derision of those he converses with and ruins the character he is so industrious to advance by it."
— Joseph Addison, 1711

One of the most well-known vanity projects of the 20th century was the building and sailing of the Titanic. The ship's owners famously boasted that the ship was practiclly unsinkble: Captain Edward Smith remarked, "Even God himself could not sink this ship."

To all who marveled at the Titanic during her building and launch, it seemed as if man triumphed over nature. The Turkish baths, wood paneling, lavish dining rooms and other features of luxury glossed over the dangers that lurked below.

We like to think all is well based on the outward appearance we project. But without the necessary introspection and hard questions we need to ask ourselves, it's just that: an appearance.

True leaders can help us aim for substance.


"A real leader is somebody who can help us overcome the limitations of our own individual laziness and selfishness and weakness and fear and get us to do better, harder things than we can get ourselves to do on our own."
— David Foster Wallace, 2000


This originally appeared in the May 6 issue of the Timeless & Timely newsletter. What are you missing? To see this issue in its entirety, with entertaining and thoughtful links, recommendations, and more, please click here.