When Fear Works ― and When It Doesn't


Have you ever felt real fear?

Like the kind of fear that gives you a palpable sense of dread? That makes your chest tighten and your heart pound?

I remember feeling like that when I first visited a lake in New Hampshire when I was 14 years old.

Growing up in Connecticut, I was fortunate to have a backyard pool. We used to host YMCA-taught swimming lessons each summer for our friends and neighbors. I remember the pride I had as I received a patch for the level I completed every year: Polliwog, Guppy, Minnow, Fish, Flying Fish, and ultimately, Shark.

By the end of each day, we'd be as wrinkled as prunes and our lungs would ache from all the time spent underwater. But we were expert swimmers, which made us even more brave when we went to the beach on Cape Cod or Newport later in the summer.

So when I first had the chance to head up to Lake Winnipesaukee for a week with a friend, I was looking forward to more time in the water, including water skiing and boating ― something impossible in a pool.

As I dipped my toes into the cool water on the edge of the lake, I enjoyed the soft sand and gravel between my toes. Located in the middle of New Hampshire, the lake is fed by runoff from the White Mountains, which means it's fairly chilly. I gradually got used to it and was finally able to get my entire body submerged.

I brought a snorkeling mask along with me, so I put it on and dove down to examine the stones and gravel as it sloped up toward the beach. But then I did something that didn't prepare me for what came next.

Remember, I had only explored the great Underwater World of My Pool until this time.

I turned my head around and looked out into the center of the lake with my mask. The dark green, somewhat murky water trailed off into nothingness, such that I couldn't see anything but the vast expanse that lay in front of me.

At that moment, I felt that tightening ― that sense of horror ― and immediately burst to the surface. Simply put, I was freaked. Out.


“Man is not worried by real problems so much as by his imagined anxieties about real problems.”
― Epictetus, c. 100


Where does that sense of terror come from?


It's certainly within our genetic programming to avoid danger. The old "fight or flight" response is well documented throughout the animal species.

But that kind of irrational response to nothing: what is that?

I think it's a combination of two powerful forces at work ― two forces that are beyond our command:

We fear the unknown and we fear what we can't control.

How positively and uniquely human is that?

Humans have been blessed with consciousness, such that we know there are things we don't know (well, most of us, anyway). We're aware that there is more out there that may be looming, waiting for us. And it is terrifying.

In a situation similar to the lake-diving incident, I recall the first time I was on a cruise ship and we were out in the middle of the Atlantic Ocean.

I stepped onto the deck one evening close to midnight, and looked out into the distance. It was a cloudy night, so there were no stars, no moon, no ambient light. It was pitch black and I was looking into nothingness. And it was terrifying to me.

It was that same sense of dread, feeling enveloped by the unknown. In this case, fear was borne not through the presence of something, but the absence of it.

Last week, we talked about death (some charming topics lately, eh?). There's been a natural connection between fear and death for as long as humans have been aware of their mortality.

If you look at all of the anti-aging products and services available, it's clear that our desire is to prolong our lives for as long as possible.


"The thing I fear most is fear… Those who are in pressing fear of losing their property, of being exiled, of being subjugated, live in constant anguish, losing even the capacity to drink, eat, and rest; whereas the poor, the exiles, and the slaves often live as joyfully as other men. And so many people who, unable to endure the pangs of fear, have hanged themselves, drowned themselves, or leaped to their death, have taught us well that fear is even more unwelcome and unbearable than death itself."


Yes, we know humans fear death ― more recently government corruption has topped the list ― but the manner of death that people commonly fear is interesting. 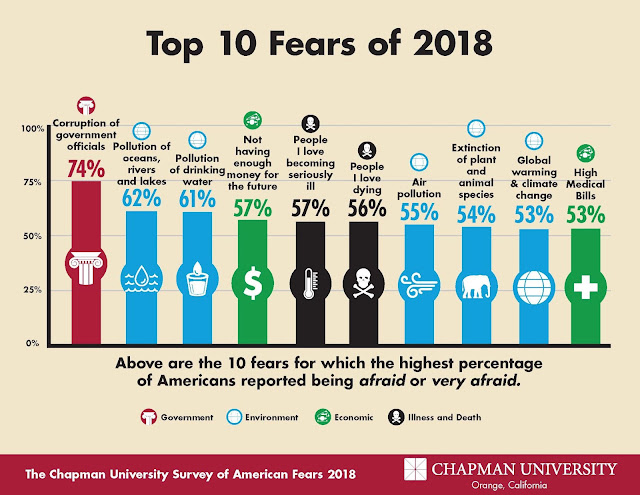 Both scary things, right? But also both unlikely things.

I could share all of the available statistics on each of these things to show how rare they are and how silly it is to be concerned about them, from a rational standpoint. But it wouldn't matter. Why not?

Because regardless of how uncommon these events are, they both have something in common: they're out of our control.

You have no control over when or where the great white shark does its hunting. When you're in a metal tube, hurtling through the air at 600 mph six miles above the earth's surface, you can't determine what will happen.

At the same time, why worry about it? If you can't do anything to change it, it's wasted energy.

And as Montaigne knew, when your fears of death consume you, you can't enjoy life.


When placed in situations with grizzly bears, mean horses or gunfighters, Theodore Roosevelt was afraid at first. And then, as he wrote in his Autobiography he discovered that he could become fearless through practice: "by acting as if I was not afraid, I gradually ceased to be afraid."

It's another way of saying "fake it 'til you make it," but TR was spot on: practice the skills you want to grow.


"Courage is resistance to fear, mastery of fear, not absence of fear."
― Mark Twain, 1894


What about the things you do have control over?

We all like to think that we have some semblance of control over our government (although lately, that's up for debate). Elections give us the opportunity to express our desires, hopes, fears and outrages.


"Fear itself these days is America's top-selling consumer product, available 24-7 as a mobile app with color-coded pop-ups in all shades of the paranoid rainbow."
― Lewis H. Lapham, 2017


If you've been following along over the last few years, you may have noticed politicians ― typically on one side of the spectrum ― who make it their business to make you afraid and angry.

Why? There's power in fear. And when you have power, you can control things ― or at least, that's the perception. And by gaining more control, you can lessen some of your own fears.

How are you motivating your team?

In Only the Paranoid Survive (1996), the late Intel executive Andrew Grove wrote about creating a passion for winning in the marketplace, and suggested that "fear plays a major role in maintaining such passion."

While no one wants to be part of a losing team, the way Grove articulated it was akin to creating a set of neuroses among employees: "fear of competition, fear of bankruptcy, fear of being wrong, and fear of losing." He seemed to focus only on the threats and weaknesses in the classic SWOT analysis.

This is almost as if to invite a corps of Cassandras to your team. If you recall from mythology, Cassandra was the Chicken Little of Troy: her constant (accurate) fears and predictions of the future were dismissed by all.

It's natural to be wary of threats and changes to the environment around us. But to live and operate in abject fear is destructive to morale.

Charles Schwab knew how to deal with people. In the classic How to Win Friends and Influence People (1936), Dale Carnegie recalls Schwab's approach:

"I consider my ability to arouse enthusiasm among the men to be the greatest asset I possess, and the way to develop the best that is in a man is by appreciation and encouragement."


The world can be a scary place, certainly. It can also be a hopeful, helpful place. It depends on where you put your attention.


Related: Leading with Enthusiasm, not Fear

This originally appeared in the Timeless & Timely newsletter for February 19, 2020. To see the newsletter in its entirety, including links, the recommended book and podcast, and more please click here.


If you liked this, I'd love to share more with you:


Some links may be Amazon Affiliates. We earn a small commission when you purchase them.