"I adore simple pleasures. They are the last refuge of the complex." ― Oscar Wilde, 1891

Last week, we talked about fear and how leadership works better with inspiration than intimidation.

And our paying subscribers read about physical and organizational structures, what's spoken and unspoken, and that each affect how a leader is viewed.

The connection between these two topics? How we treat others in our lives, whether they're employees, colleagues, friends, or family.

None of this is rocket science. It comes down to maxims we've heard for millennia: the Golden Rule, listening more than speaking, and long-term thinking.

These are some of the hallmarks of great leaders.

But there's another ability of great leaders that's worth spending some time thinking about. Along with having good communications skills, they're usually good strategists.

What lies at the intersection between these two strengths is a true talent:

"More and more, informal language is building trust, not destroying it."
― Ron Tite, 2019 (Think Do Say)


We've got a temptation to make things more complex than simple. Part of it is a self-preservation mechanism: like academics who use unnecessarily flowery language in peer-reviewed journals, it's a matter of elevating ourselves to seem smarter and "own" the topic.

But when you're trying to motivate a workforce, inform investors, or connect with customers, they have one simple request: eschew obfuscation.

That is, just tell me what you do, plain and simple.

I was fortunate to serve fairly closely with a CEO whose style was all about simplicity. Not in a dumbed-down way, but in a friendly, collaborative sort of way. He ensured that everyone understood the company's mission and how they fit into the complex matrix of a global organization.

He knew that it was his job to meet employees where they were – physically, and philosophically – and bring them to where he wanted them to go.

That CEO was Alan Mulally, and his strategic plan for Ford Motor Company was called "One Ford." It was quite simple: One Team, One Plan, One Goal – an exciting and viable Ford delivering profitable growth for all. 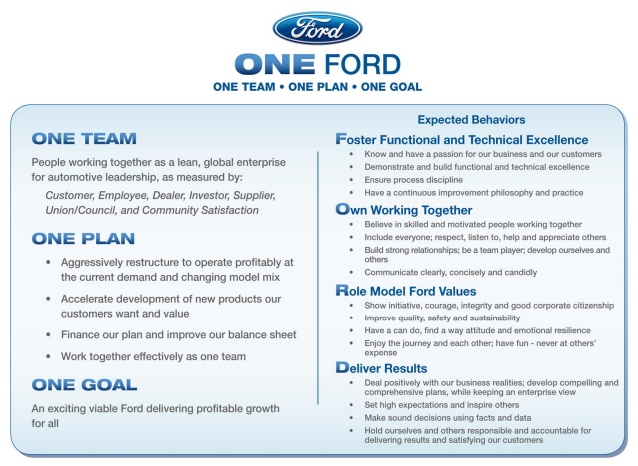 Sure, the details below each section made it a little longer. But it was in plain language that fit on an I.D. card. Everyone could recite it, because the message was so simple, and because Alan spent so much time repeating it to everyone.

Not too long ago, Alan told me, "If you want to be successful, you have to have a plan, and you have to communicate the plan."

Alan knew that simple communication was the most effective. How refreshing when everything else around us is complicated.

“One should use common words to say uncommon things.”
– Arthur Schopenhauer, 1818


In addition to the importance of simplicity and clarity in your communication, it also helps to be able to address challenges and obstacles the same way. When you're mired in the day-to-day details of running your business, sometimes it can be difficult to see the bigger picture.

This is why some leaders like to bring in consultants with an outside perspective. A fresh look from someone with a different set of experiences can be a real eye-opener.

This is the kind of work that I love doing. When a client brings me in, lays all the facts before me, and I have a chance to ask questions, there's a moment when I immediately see how to help them. A true light bulb moment.

The dilemma is that I can't say that I dispense common sense. Because everyone thinks they have common sense – and indeed they do. But when you're so close to a project or topic, it can be difficult to separate yourself from it enough to get the wider picture or a different perspective.

Here's a perfect example of how this played out between Sherlock Holmes and Dr. Watson in "The Adventure of the Dancing Men":


“So, Watson,” said he, suddenly, “you do not propose to invest in South African securities?”

I gave a start of astonishment. Accustomed as I was to Holmes’s curious faculties, this sudden intrusion into my most intimate thoughts was utterly inexplicable.

“How on earth do you know that?” I asked.

He wheeled round upon his stool, with a steaming test-tube in his hand and a gleam of amusement in his deep-set eyes.

“I ought to make you sign a paper to that effect.”

“Because in five minutes you will say that it is all so absurdly simple.”

“I am sure that I shall say nothing of the kind.”

“You see, my dear Watson”—he propped his test tube in the rack and began to lecture with the air of a professor addressing his class—“it is not really difficult to construct a series of inferences, each dependent upon its predecessor and each simple in itself. If, after doing so, one simply knocks out all the central inferences and presents one’s audience with the starting-point and the conclusion, one may produce a startling, though possibly a meretricious, effect. Now, it was not really difficult, by an inspection of the groove between your left forefinger and thumb, to feel sure that you did not propose to invest your small capital in the goldfields.”

“I see no connection.”

“Very likely not; but I can quickly show you a close connection. Here are the missing links of the very simple chain: 1. You had chalk between your left finger and thumb when you returned from the club last night. 2. You put chalk there when you play billiards to steady the cue. 3. You never play billiards except with Thurston. 4. You told me four weeks ago that Thurston had an option on some South African property which would expire in a month, and which he desired you to share with him. 5. Your chequebook is locked in my drawer, and you have not asked for the key. 6. You do not propose to invest your money in this manner.”

“How absurdly simple!” I cried.

“Quite so!” said he, a little nettled. “Every problem becomes very childish when once it is explained to you.


There's the opportunity: to bring the simple magic that your work does, without devaluing what you do by revealing the methodology. Even some 2,000 years ago, Tacitus knew that everything unknown is thought to be amazing:


What if you could amaze people with simplicity?

People don't expect the common and simple these days.

They don't expect a handwritten note when they're barraged with emails and text messages.

They don't expect that you'll remember their name when they're required to give three forms of I.D. to make a deposit at the bank.

Sometimes, that's all it takes.

Use language they can relate to. Remember their name. Just say hello.

It really is that simple.


This originally appeared in the Timeless & Timely newsletter for February 26, 2020. To see the newsletter in its entirety, including links, the recommended book and podcast, and more please click here.


If you liked this, I'd love to share more with you:
Some links may be Amazon Affiliates. We earn a small commission when you purchase them.
Posted by Scott Monty
Labels: communication, leadership, newsletter, timeless wisdom
at 12:12 PM