The Secret of My Succession


A brief note before we begin.

I'm changing things up a bit. I'm officially retiring the name "The Full Monty" from my newsletter. It was a good run, but if you've been following along, these updates no longer feature scores of curated stories rolled into one update. There are still stories; just fewer of them.

Excellent daily newsletters like Morning Brew and NextDraft are much better equipped to keep up with the pace of industry news and provide a mass of curated stories.

I suppose this change had been coming for a while, but I just wasn't ready to make it (or admit it).

Where are my thoughts now? On bigger issues: strategy, leadership, integrity, and growth, sprinkled with valuable lessons from history and literature. In short, a chance for more reflection on what matters most to leaders.


"It is not by muscle, speed, or physical dexterity that great things are achieved, but by reflection, force of character, and judgment."
– Cicero

I'll be back again later this week. (If you can believe it, some subscribers are even opting for an exclusive third update each week!) I hope you'll take this journey with me and encourage others to do the same.


We all have a finite amount of time on this earth. And an even more limited time in our jobs, despite a possible desire to remain on longer.

At times, the ego can get in the way—even in the best leaders. But more so from those who might not be quite as competent. Notice I didn't say charismatic; there are far too many instances where charisma makes up for talent deficit disorder in leaders.

The Roman Empire lasted nearly 1,000 years, but it had its fair share of leadership issues, particularly in the latter half. Consider:

What was causing all of this upheaval and a revolving door on Capitoline Hill? Power struggles from within the army and confusion over succession rules.

In the past week, we saw turnover at some high-profile companies with at least one superstar CEO: Juul, eBay, and most notably WeWork fired their chief executives.

Mismanagement, a new direction, incompetence—the reasons are many. But in light of this, the market is experiencing some hiccups.

An orderly transition matters for all stakeholders, not just investors. Employees, suppliers, customers, shareholders: they all need consistency, transparency, and a sense of certainty in an era of change and chaos.

In handing in his commission as general and later relinquishing the presidency after two terms, George Washington demonstrated leadership that didn't fall prey to ego (and was very conscious about such appearances).

Ever since 1797, we've witnessed a peaceful transition of power from our nation's chief executives. As ever, Washington served as an example to them and to leaders everywhere about the need to put ego aside for the greater good.

"I have gathered a posy of other men's flowers, and nothing but the thread that binds them is my own." – Montaigne

Facebook and YouTube will allow politicians to say whatever they want on the platforms because the tech companies think their speech is "newsworthy." This puts them in the same camp as Twitter. No one wants to be a referee in a political cage match. (Recode)

My take: Fasten your seatbelts. We're about to see the limits of this theory get tested.

In April 2018, Mark Zuckerberg, Facebook’s CEO, told Congress about an ambitious plan to share huge amounts of posts, links and other user data with researchers around the world so that they could study and flag disinformation on the site. Spoiler: they're not going to make the deadline. (The New York Times)


Putting the Rhythm in Algorithm

Teenagers are all about TikTok, the video app that's like a reincarnation of Vine. It's fast. It's quirky. How does TikTok hold their attention? (The New Yorker)

My take: It's a powerful combination, centered around music and video. And parent company ByteDance is shaking up news aggregation.

Agency: You Need a Podcast

Okay, so even your mother may have a podcast now (mine does, but you need the password to my voicemail to listen to it), but there are still things the noobs need to know. The five secrets to starting a new podcast. (AdWeek)

My take: My own secret (having started four podcasts) and contained in the article above is: figure out what your story is so that it's interesting to people who don't know you. Also, check out the AdWeek Podcast of the Year Awards 2019 (I'm on the jury).

Not to be Confused with AdWeek

A helpful summary of seven important takeaways from Advertising Week in New York last week, including improved analytics, the difference in generational perceptions about privacy, and more. (Forbes)

My take: Much of the above information comes from the Voices of the Generations report from Adobe. Last week's link was broken, so be sure to check it out.

Amazon announced that Alexa users will be able to automatically delete voice recordings after 3 months or 18 months. (Venture Beat)

My take: It's a good move for privacy, but it makes you wonder how much they've been hanging onto to date. Also, don't miss the news that Samuel L. Jackson will be the first celebrity Alexa voice. "Say 'what' AGAIN!" (Big Think)

Older generations have the benefit of the long view, a better understanding of strategy, and more world experience. The case for hiring older workers. (Harvard Business Review)

My take: I call it #TimelessWisdom. And it's what I apply to the C-suite.

For the Curious Mind

"Curiosity is the lust of the mind." – Thomas Hobbes

The first case for whistleblower protection was in 1777. In this case, they were 10 American sailors and marines who had reported improper behavior by the Continental Navy’s most powerful man. He was of "quick temper, misconduct and poor character," and "a man of no principles, and quite unfit for the important trust reposed in him." (History) You don't say...


Before there was Moby-Dick, there was the whaleship Essex, which was attacked and sunk by a whale. Only five crew members survived, returning with a tale of starvation, madness, and cannibalism that inspired Herman Melville. (Smithsonian)


From the times liquor might be served in Fall River, MA to the example of a man who was executed because of a punctuation mistake, in Semicolon Cecelia Watson provides a brief history of the origin and ultimate acceptance of the semicolon. (National Review)


One of my favorite words is flâneur. "Between the Streets" is a look at wandering the streets as a spectator who assumes the position of being able to be part of the spectacle and yet command it at the same time. (Lapham's Quarterly) 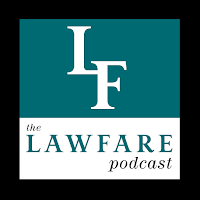 The Lawfare Podcast is the weekly audio production of the Lawfare staff in cooperation with the Brookings Institution. Podcast episodes include interviews with policymakers, scholars, journalists and analysts, events and panel discussions on the topic of national security. Given the news lately, it's a good idea to have a companion show such as this to help make sense of everything.

George Washington’s Farewell Address was a prophetic letter from a “parting friend” to his fellow citizens about the forces he feared could destroy our democracy: hyper-partisanship, excessive debt, and foreign wars. He called for unity among “citizens by birth or choice,” advocated moderation, defended religious pluralism, proposed a foreign policy of independence (not isolation), and proposed that education is essential to democracy. Washington's Farewell: The Founding Father's Warning to Future Generations by John Avlon.

I'm an executive advisor/coach. A corporate conscience. A C-suite whisperer.

Executives are in constant demand, have relentless deliverables, and try to set a long-term strategic course. All while trying to keep up with trends and deliver short-term value.

I bring Fortune 10 executive experience and an outside perspective to help you with growth and focus.

Bring me in to work with your C-Suite, review your team structure, provide strategic advice, or speak at an event.


Disclosure: Some links may contain Amazon affiliate links; we earn a small commission on your purchases.