The Ethics of Ride-Hailing


The ride-hailing industry—Uber, Lyft, and their counterparts—is the personification of the current version of the American Dream: cheap convenience.

Traditionally in the service business, the offer to the client goes like this:

What's happened with Uber (the poster-child for this movement) goes beyond that. With Uber, you get all three!

And that's unsustainable. At least in the current configuration.

Uber's business model is built on the notion of cheap labor. When Uber went about establishing itself, the goal was to dominate the market — don't forget that uber alles means "above all" — they offered cheap rides to customers and financial incentives to bring drivers on.

“Ethics were not a hallmark of Uber’s first decade.”
—Mike Isaac, Super Pumped: The Battle for Uber

There are far too many ethical aspects of Uber to explore in this piece; we'll just focus on their relationship with drivers.

In each market, Uber spent whatever necessary to hook riders on their service. Like a drug dealer, they'd make the product cheap and irresistible. And then, once you're hooked, they change the terms of the deal.

Surge fares are well known, and despite some high-profile anomalies, riders generally accept them because of the convenience.

But the more impactful changes in the deal happened on the driver side. In a report from Jalopnik, they showed that Uber was keeping 35 percent of fares from drivers; in Uber's S-1 filing, they stated their take was closer to 20 percent. The Open Markets Institute wrote that the findings “support the argument that their business model is built on large scale labor exploitation.”

This might be a good juncture to note that Uber's S-1 also contains this bold (and patently false) claim:

According to Isaac, Uber executives


“had major blind spots because of their fixation on growth, their belief in technological solutions, and a casual application of financial incentives that often inflamed existing cultural problems.”

In other words: profit and growth, at all costs.

This is the kind of misguided prioritization that the Business Roundtable change is designed to address. The new Statement on the Purpose of the Corporation indicated that employees, customers, suppliers, communities, and shareholders should be the focus of businesses.

Drivers Are Contractors, Not Employees

Uber has made no secret that it doesn't value drivers. Early on, Uber's goal was to move to autonomous vehicles (drinking the Silicon Valley Kool-Aid that predicted driverless cars everywhere by 2018). In order to get there, Uber had to dominate the market, and one way to do that was with cheap labor.

The evolving gig economy provided the perfect vehicle for gaining cheap labor. Coupled with a culture of disdain for municipal laws and regulations, Uber just went about its business with little regard for all of the above.

Much of the culture of the company came from the founding CEO, Travis Kalanick, who was ousted in 2017. Dara Khosrowshahi replaced him and set a new tone for the company, attempting to make up for past sins.

But one thing Uber—then and now—does not abide is drivers being recognized as employees. For years, they've fought the concept, even misleading some drivers into petitioning against their own rights.

In recent months, Uber, Lyft and DoorDash pledged $90 million to fight legislation that would recognize their drivers as employees, not contractors. Think about that: $90 million that they could put toward employee benefits that they'd rather lobby with. I recognize that they want to save money for the money-losing enterprises they oversee, but I'm just saying "We do the right thing," am I right?


And speaking of DoorDash — what kind of company steals its employees tips? NBC and then the New York Times had stories about how the company used tips given within the app to subsidize worker pay.

Oh sure, they've since vowed to end the controversial practice, but who needs to be told that doing that is wrong?

These businesses suffer from a crippling lack of ethics and integrity.

If you're following along at home, integrity means doing the right thing, even when no one is looking. (click to tweet) 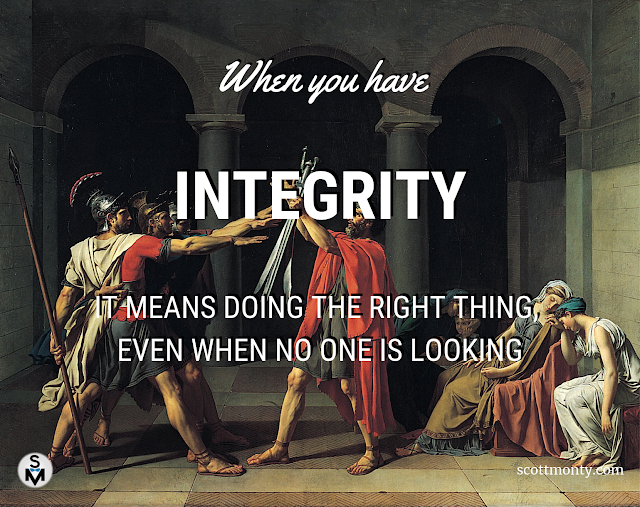 Who Leads the Change?

While the Business Roundtable statement is high-minded and noble, we need to be completely clear-eyed about the prospect of change. Left to their own devices, CEOs are unlikely to make a shift particularly if it's a publicly-listed company.

That's the main takeaway from James O'Toole's The Enlightened Capitalists. CEOs who are beholden to stockholders and shareholders will still be under their thumb. Companies that are owned outright by their executives have more leeway.

Absent that arrangement, who's responsible for ensuring things change?

But these are one-offs, and the companies aren't naturally predisposed to acting in such a magnanimous manner toward their "employees."

Perhaps they should have thought of that before they structured a business model primarily designed to benefit investors.

Beyond the financial bottom line for investors is this moral dilemma for consumers: We need to ask ourselves what price we're willing to pay for the goods and services we get.

If we want to enjoy cheap products and transportation, then we need to accept the moral trade-offs we might have to make. If we want to live by a certain set of principles, then we may need to alter our habits or ask more out of the brands we patronize.

As to the C-suite, it needs to ask itself if it's okay with the status quo and chasing growth at all costs. If not, then commit to some changes that get out ahead of regulations. If serving investors is to remain the primary purpose, then just admit it.

Otherwise, stop with the lip service of "doing the right thing."

It's insulting to everyone.


Thanks, and I'll see you on the Internet.