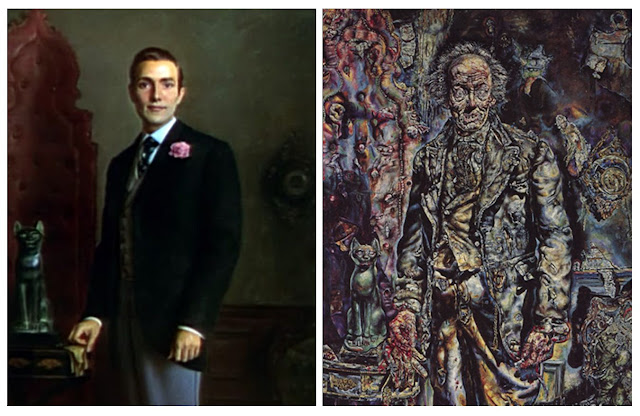 "In this world there are only two tragedies.
One is not getting what one wants, and the other is getting it."
–Oscar Wilde

If you want to get someone's attention, it's simple: ask them about themselves.

It was one of the most important premises behind Dale Carnegie's How to Win Friends and Influence People.

And that's exactly what FaceApp did last week. It tapped into two powerful strains of human nature: curiosity about our own future and narcissism. It's as if Dorian Gray met Narcissus.

In The Picture of Dorian Gray, Oscar Wilde introduced us to Dorian Gray, a handsome young man who had his portrait painted. Afterward, he wished that he could remain the same age forever, but that the portrait would age. He soon finds out he made a Faustian bargain: he retains his youth but has lost his soul. The portrait, stored in an attic, takes on grotesque features as Gray embarks on a life of debauchery.

In the Roman myth, Echo fell in love with the beautiful Narcissus, who was desired by men, women and gods alike. But Narcissus, on seeing his own reflection in a pool of water, became infatuated with it and consequently rejected Echo. She then pined away until only her voice remained.

Social media has always fed the narcissistic side. We thrive on likes, shares, and comments. We hope to "go viral." We keep pressing the refresh button in an effort to get that hit of endorphins that attention brings.

In an image-obsessed culture—particularly one that values youth over age—many people maintain fine-tuned feeds of photos that flatter themselves.

So when FaceApp came along (again - this isn't our first rodeo with them), the lure was irresistible: upload a photo and see what you'll look like in 20 years. Many people fell for it without realizing it's a Russian company with loose privacy standards.

Even more terrifying: this isn't the only place it's happening. More likely than not, your data is for sale because of software you probably installed yourself on the internet browser of your choice. It's likely that this kind of data collection is already happening on Facebook too:

"FaceApp and Facebook are clearly two very different beasts. One is an opaque tech company operating under unclear privacy regulations and with little oversight on how it uses its technology, and the other one is FaceApp."

The point is: we're warned about situations like this time and again. And yet we still fall for it.

Humans will always take the shortcut, if given the option. But unlike our ancestors or animals, we won't be vigilant about the wild boar waiting for us in the woods.

Especially if we're walking around with a phone in front of our faces.