How to Turn Customer Woes into Customer "Whoas!"

I'm a Frank Sinatra fan. (That much shouldn't be a surprise.) The lyrics from his song "It's Nice to Go Trav'ling" include this line:

Travel is a double-edged sword. It can be a sheer delight, with discoveries of new foods, smells, and sights. Or it can be a burden, with late-night flights, delays, missed connections, and other unplanned hiccups that otherwise prevent you from reaching your destination in a timely manner.

Part of being able to survive business travel in particular is to get in the mindset that this is part of what you signed up for, and to try to make the best of any situation. It also helps when you do business with travel and hospitality brands that go the extra mile.

I found myself in just such a scenario recently.

I was flying from Detroit to San Jose (SJC), with a connecting flight through Salt Lake City (SLC). While I usually prefer direct flights, this was arranged by Adobe (a client), so I showed up early and settled into the Delta Sky Club. I already had a notice from TripIt that it was going to be a tight connection, with about forty-two minutes between flights in SLC.

It was then that Delta notified me that the flight was delayed by about thirty minutes, making the connection even more tenuous.

So, I scrambled to see what the options were: the agent at the SkyClub said there was a direct flight to San Francisco leaving in thirty minutes, the travel agent looked into additional flights from SLC to SJC (spoiler alert: there were none), and I went with my go-to move: a tweet to @Delta on Twitter. I'm only a Silver Medallion SkyMiles member (their lowest tier), so I didn't have high expectations with the last maneuver. 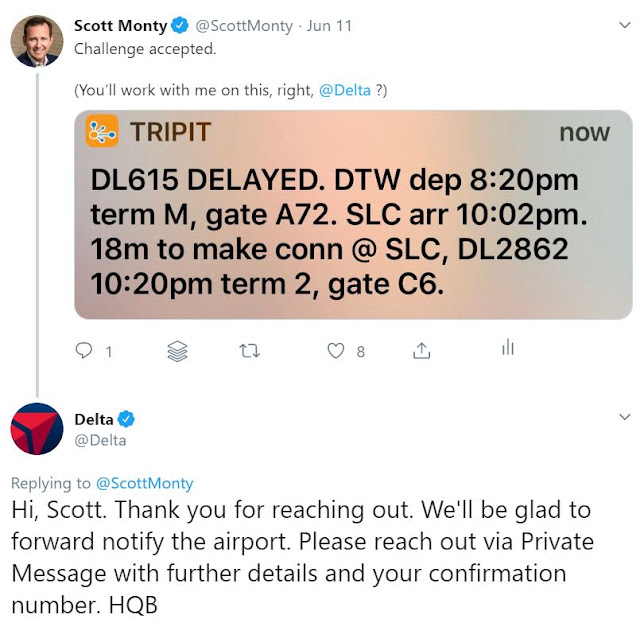 After about fifteen minutes, the travel agent got back to me with  ¯\_(ツ)_/¯ and a recommendation that I just go on a wing and a prayer (yes, I know). And the SFO flight was sold out by that point.

Meanwhile, Delta had already replied to my tweet and took things to direct message, with an unexpected level of service:

All I can say is: wow. (Or whoa, if I'm being consistent with the title above.)

The flight was indeed delayed, and by the time we arrived at SLC, there was an eighteen-minute gap between flights. With doors closing fifteen minutes before a flight is scheduled to depart that left—check my math here—only three minutes to make the connection. I notified Delta of what was happening during our terminally slow taxi: 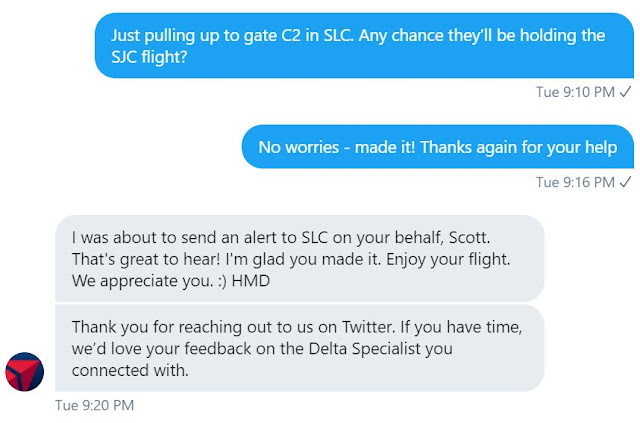 Even better than Delta's stellar customer service was their choice of gates. We landed at C5 and the connecting flight was at C6. Talk about luck!

As the flight to San Jose departed, I took the pilot's advice to "sit back and relax" (have you ever seen anyone sitting forward?) and breathed a sigh of relief that I was nearly there.

But that feeling wasn't to last for long. Things were about to go sideways.

Not HHonored to Be Here

The flight landed and I caught a ride to my hotel, the Hilton San Jose. I'm an HHonors member with gold status, and I usually opt for the digital key when I check in—where you can unlock your room with your smartphone.

When I approached the front desk to check in, the manager told me that there were no more rooms available. My head began swirling. It was 11:15 p.m. (which translated to 2:15 a.m. back in Detroit).

I immediately questioned the reality: "Are you sure? I had a reservation." No, all rooms were occupied. There was nothing they could do. But they did make arrangements for me at another hotel.

"Oh, well that was kind of you. At least I'll have a room—FIFTEEN MILES AWAY!—what?"

"We're sorry sir, but all of the other hotels nearby are booked as well. We do have a room reserved for you at Dinah's Garden Hotel in Palo Alto."

Trying not to hyperventilate as I imagined Silicon Valley traffic and trying to get to my 8:15 a.m. meeting that was literally across the street from the Hilton, I went through my mind what the options were.

So I pulled out my phone and opened Hotel Tonight, one of my favorite apps for handling last-minute travel plans. It showed the La Quinta San Jose Airport with availability, which I showed to the hotel manager. He seemed confused, but I told him I was going to book it. 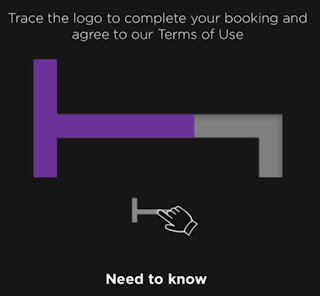 A quick push of the button later and a thumb slide across their logo—a movement so satisfying that it's second only to sliding into a soft comfy bed after a long trip—charged my card and notified me that I had a room.

The Hilton manager called ahead to La Quinta to verify they had my reservation before paying my cab fare to get there. As you've surmised, the manager at La Quinta didn't have a record of me, and insisted they didn't have any rooms either. After an exasperating conversation that seemed like it was straight out of Seinfeld, I hung up and resigned myself to an evening in Palo Alto.

Oh, did I mention that the flight crew from Salt Lake City had arrived and checked into their four rooms? It doesn't seem right that a Gold HHonors member would get stiffed when checking in before four other guests.

The Hilton staff assured me that I'd have a room the next day and that they'd take care of the cab fares to and from Palo Alto. I thanked them and got in the cab to head northwest. Along the way, the cab driver told me that there was a power outage at the Marriott, and they unloaded all of their guests onto the other hotels. Hence the state of non-vacancies.


Tip: If you communicate clearly and transparently to your customers, they're likely to be much more understanding. Lack of communication invariably will lead to frustration, anger and resentment.

Meanwhile I had tweeted @HotelTonight (foolishly thinking that I'd get a Twitter two-fer on customer service), but their canned response was to contact their team on the phone. I had neither the energy nor the composure to call the customer service number at that hour, so I just replied to their non-reply reservation email and let them know that I didn't have the room that they charged me for.


I arrived at Dinah's Garden Hotel just after midnight and was greeted warmly and with empathy. It was a lovely retro-looking establishment with a lush pool area and well-reviewed restaurant. The facilities were updated and modern, and the management had a plate of apples and a couple of Ghirardelli chocolates waiting for me in the room.

The next morning, I was out the door at 7:15 a.m. and had an uneventful ride back to the Hilton in San Jose. The good news was that I discovered that Hotel Tonight had answered my email overnight and would be refunding my money. So far, so good.

The front desk staff back at the Hilton was welcoming and expressed their apologies for the disruption the night before. They took my email address so the manager could get in touch, and they whisked me upstairs to my room, which was available that early.

In the room, I noticed this placard, with Hilton's brand promise:

Knowing as I did that the hotel had its hands full and made arrangements for me before I arrived, I didn't really have any complaints that morning (other than having to relocate so far away the night before). I was simply grateful to have a room.

But imagine my surprise when I arrived back at the room after a day of meetings, to find this: 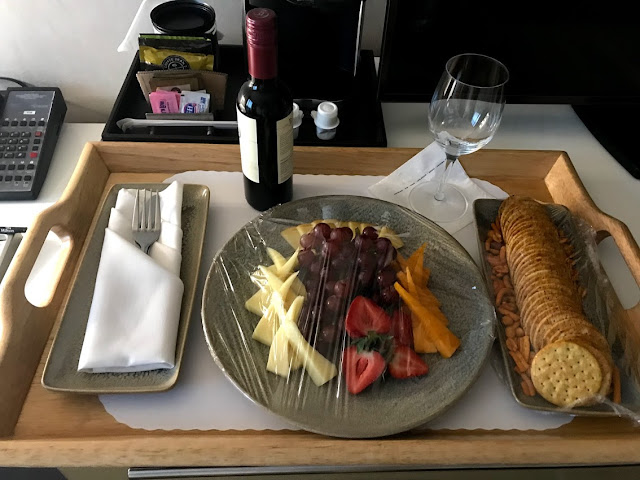 This was a nice gesture to try to smooth things over. But here's the thing: did this gesture Make It Right?

I don't think that it did.

An HHonors member getting stiffed over a reservation, no communication about the situation before or after (the manager never reached out as promised), and watching other guests check in while I was being exiled to another city: Does a cheese and wine make this right?

No, what would make it right would be to do something commensurate with the lost night. A bundle of HHonors points, a complementary stay—something, anything to make it clear that I'm valued.


UPDATE:
The manager of the San Jose Hilton got in touch to say that he had written a personal note with an apology and 25,000 HHonors points; it evidently did not get delivered with the amenities. He was thorough and thoughtful in his email, and demonstrated the kind of hospitality that I have come to expect from Hilton (which is why I was shocked that they didn't seem to have met that in what I recounted above).

I hope to make the San Jose Hilton my hotel of choice upon my return to San Jose.

Summing up the interactions, here's how I'd rank them:


Delta made me feel the most cared about. They knew what I'd be going through and were helpful, going the extra mile without me having to ask. While Hilton made sure I wasn't homeless for the night, their communication was less than stellar and their snack tray didn't make anything right.

And this is the difference between brands that want to ensure they keep good customers and those that don't care and would rather chase new customers.

Brands that show empathy—that care enough to take care of you the way they'd take care of their own family when traveling and anticipate your needs—these are the brands that create better customer experiences. That build trust. And ultimately, loyalty.

When a brand is able to turn a woe into a "whoa," you'll see that the customers they took such good care of will come back again and again.

Returning to Frank Sinatra, he recorded the Cole Porter song  "I Concentrate On You" three times in his career. As an entertainer whose star shone bright and faded many times, it's no wonder, as the lyrics indicate the value of someone who was there for him, especially through difficult times:


When fortune cries "Nay, nay" to me
And people declare "You're through"
Whenever the blues become my only songs
I concentrate on you
On your smile, so sweet, so tender
When at first my kiss you do decline
On the light in your eyes when you surrender
And once again our arms intertwine


May we be so lucky to have people and brands that inspire that level of devotion from us.