The Secret of Good Futurists 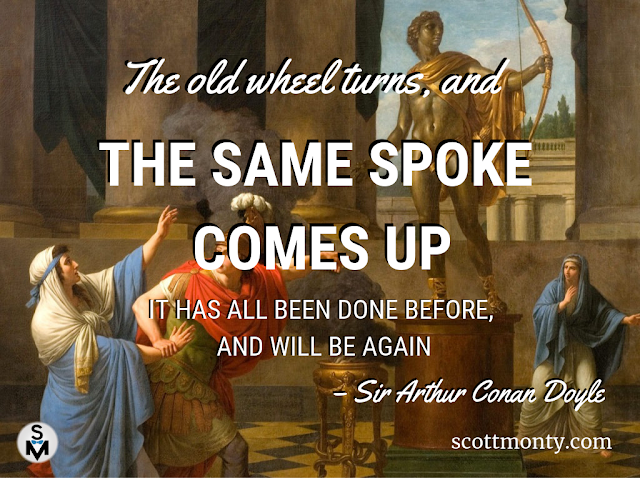 Listen to this commentary

We all know the tragic story of the Titanic. It's a story that could have written itself: the largest moving object in the world, the most technologically advanced ship ever, and man's hubris flying in the face of God and nature.

The novel Futility by Morgan Robertson picked up on these very themes. Robertson chronicled all of the workings of the ship:


"She was the largest craft afloat and the greatest of the works of men. In her construction and maintenance were involved every science, profession, and trade known to civilization. On the bridge were officers…being the pick of the Royal Navy. The same professional standard applied to the personnel of the engine-room, and the steward's department was equal to that of a first-class hotel.

"The bridge, engine room, and a dozen places on her deck the 92 doors of nineteen water-tight compartments could be closed in half a minute by turning a lever. These doors would also close automatically in the presence of water. With nine compartments flooded the ship would still float, and…this steamship was considered practically unsinkable."


"Unsinkable—indestructible, she carried as few boats as would satisfy the laws. These, twenty-four in number were securely covered and lashed down to their chocks on the upper deck, and if launched would hold 500 people. She carried no useless, cumbersome liferafts; but—because the law required it—each of the 3,000 berths in the passengers', officers', and crew's quarters contained a cork jacket, while about twenty circular lifebuoys were strewn along the rails."


You know how it ends. The ship, on its way from Southampton to New York, collides with an iceberg in the middle of the North Atlantic one starry April night. It then sinks with thousands of souls aboard. It's a morality tale we've all heard, rich in irony and steeped in tragedy.

Only Robertson's book wasn't an eyewitness account of the sinking of the Titanic. His book, Futility, was originally titled The Wreck of the Titan: Or, Futility.

No, he didn't get the ship's name wrong. You see, he wrote his tragic novel predicting the advances of transporation and warning of the inadequacies of maritime regulations — about a fictional ship called the Titan — nearly identical in every way to the Titanic.

He wrote this book in 1898. A full fourteen years before the Titanic set sail.

After the Titanic's sinking, some people credited Morgan Robertson with clairvoyance. Robertson denied this, claiming that the similarities were explained by his extensive knowledge of shipbuilding and maritime trends.

Imagine if the Titanic's shipbuilders Harland and Wolff, its owners the White Star Line, or its captain Edward J. Smith had been aware of Robertson's book. Or if they simply heeded his warnings, rather than thinking they had all the answers.

"My dear fellow, fellow,” said Sherlock Holmes as we sat on either side of the fire in his lodgings at Baker Street, “life is infinitely stranger than anything which the mind of man could invent. We would not dare to conceive the things which are really mere commonplaces of existence. If we could fly out of that window hand in hand, hover over this great city, gently remove the roofs, and peep in at the queer things which are going on, the strange coincidences, the plannings, the cross-purposes, the wonderful chains of events, working through generations, and leading to the most outré results, it would make all fiction with its conventionalities and foreseen conclusions most stale and unprofitable.” – Sir Arthur Conan Doyle ("The Greek Interpreter")


That's Sherlock Holmes's way of saying truth is stranger than fiction. And in many ways it is — or can be.

There are so many stories from our collective history — stories of victory and vanquish, of happiness and hopelessness, and of comedy and calamity — that we don't really need to go out of our way to find them or create them.

"Ripped from the headlines" is an old trope in popular culture. It's most frequently used in the multiple Law and Order shows on TV. It's not only an easier task for the writers, but it also lends credibility to the plot, as we're more likely to connect emotionally with a subject or characters if we believe it could happen to us or someone we know.


“The old wheel turns, and the same spoke comes up. It’s all been done before, and will be again.”
– Sir Arthur Conan Doyle (The Valley of Fear)

Sherlock Holmes made it his business to study crimes of the past, and Scotland Yard sought his consulting skills because of the work he put in to learn his craft:

"When these fellows are at fault they come to me, and I manage to put them on the right scent. They lay all the evidence before me, and I am generally able, by the help of my knowledge of the history of crime, to set them straight. There is a strong family resemblance about misdeeds, and if you have all the details of a thousand at your finger ends, it is odd if you can’t unravel the thousand and first." – Sir Arthur Conan Doyle (A Study in Scarlet)


It would behoove us to study not only business and marketing successes of the past, but to consume some of the Great Books to understand human nature and motivations, and to save ourselves some time.

While we may think that the use of Snapchat, Instagram or artificial intelligence puts us at an distinct advantage from any of the leaders who came before us, we should see how we might benefit from their mistakes or successes. Leading with hubris and willful ignorance isn't a good look.

Just ask Captain Smith how that worked out for him.