Mark Zuckerberg's announcement last week that Facebook is throwing its efforts into private, encrypted messaging should have rung alarm bells, despite his plaintive concerns about safety. More on safety in a moment.

First, it's worth pointing out that the move itself — putting more focus on private messages — is one of self-preservation, pure and simple. It's a move to control the platform where users are and to defend itself against a potential break-up.

When a CEO pens a 3,200 word manifesto-cum-business strategy, it's not a knee-jerk reaction to something happening in the news. You can guarantee that this is something that's been discussed in board meetings and strategic planning sessions.

Facebook sees user growth numbers before any of us. And they naturally want to shield any negative news for as long as possible. But Edison Research did its own independent research and found that the number of Facebook users was shrinking from 2017 to 2018. We know that Facebook was continuing to see growth from Instagram, one of its other properties.

So what's Facebook to do? Since we're seeing more people flee the always-public updates and seek out more intimate, private places (Facebook Groups, Messenger, WhatsApp, Instagram, and critically, SMS), Facebook is positioning itself to own private chat.

In some ways, it's amazing that it took us this long to get here. It's been about a decade of major public adoption of public social networks. And look what it's gotten us: contentious debates, irredeemable trolls, duplicitous bots, and misinformation. It's the exact opposite of what's needed.

While not explicitly stated in the U.S. Constitution, privacy is a fundamental right that flows throughout a number of Amendments. And despite Facebook's seemingly magnanimous pivot to privacy, there are causes for concern.

In a must-read essay, Jay Baer lays out that Facebook's move is all about controlling the communications platform of the future. They have the critical volume: roughly 30 percent of the world's population is on one of Facebook's platforms.

And by merging the four of them together, Facebook will then have a super-platform that will control the flow of private messages, integrate commerce, and distribute advertising.

It's unparalleled in scope.

At nearly the same time that Facebook published its new strategy, Senator Elizabeth Warren published her own position — a rather wide-reaching and sometimes incorrect one — on the need to break up Big Tech. Ben Thompson, as usual, has thought about this deeply over on Stratechery and deserves a careful read.

But Facebook's move in advance of any regulatory crackdown, in addition to positioning the company as an unstoppable communications juggernaut, also accomplishes something else. By merging the infrastructure of Instagram, WhatsApp, and Messenger, it makes it more difficult to extract them from each other, should the government call for a break-up of Facebook.

Just as Zuckerberg said it's nearly impossible to make an ad-free version of Facebook, he might make the case that it would be too difficult to separate the messaging systems from one another. So merging the three in advance of regulatory oversight could be a way to protect the firm.

As an aside, it's worth checking out Planet Money's three-part series on anti-trust matters: Standard Oil, The Paradox, and Big Tech.

A Word About 'Safety'

Facebook says that it will protect our data in encrypted messages, which will lead to a safer experience on Facebook. There's no question that such moves will protect our data. But what's been happening on the platform in recent years regarding the spread of misinformation and fake news (real fake news, not the kind of news that reflects poorly on a world leader) demands more attention.

We need our minds and our sensibilities protected from malignant forces, not just our data.

In this regard, there's no evidence that private conversations will yield more safety. In fact, the opposite may be true: it will drive hate speech, misinformation campaigns, and other dangerous movements underground. It's a potentially insidious development.

If anything, we need better monitoring of the very public systems we already have in place before doubling down on giving them more life elsewhere.


"Publicity is justly commended as a remedy for social and industrial diseases. Sunlight is said to be the best of disinfectants; electric light the most efficient policeman."
— Louis D. Brandeis

Lest you think that Facebook is making any of these moves for the benefit of society, recall that the company has had every opportunity to do the right thing, to build trust, to develop its own set of standards and ethics before being called out. And at every turn, the company has failed to do so.

How can we reasonably expect this time to be any different? 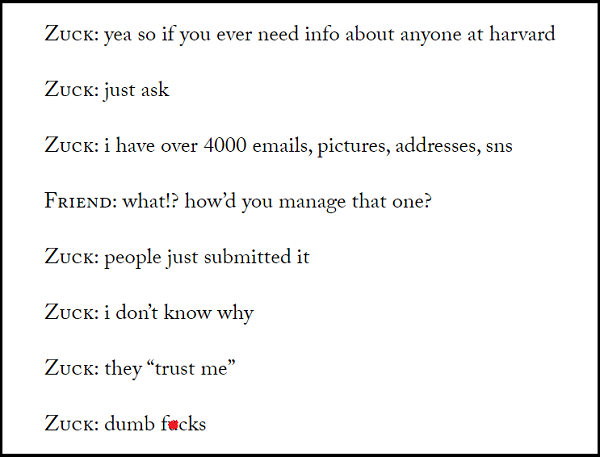