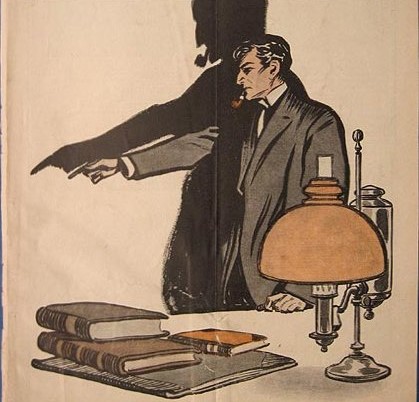 Sherlock Holmes knew a thing or two about analytics.

Sure, he was a master of logic and inductive reasoning. But he had a way of preparing his mind to take in facts, sort them out, and determine what happened.

And so it is that we need to prepare our eyes, ears, and minds — that is, our monitoring tools and our analysis — to understand the true impact of our business efforts.

In Gilbert and Sullivan's comic opera H.M.S. Pinafore, Buttercup is a dockside vendor who boards the ship to sell wares to sailors. She carries with her a long-held secret, and offers this prophesy by way of song:

It's a lesson in not trusting our eyes alone. Often times, when presented with something, we'll simply look at what's in front of us or miss it entirely, rather than probing for more information.

In the very first Sherlock Holmes short story, he said, "You see but you do not observe. The distinction is clear."

In that case, he was chiding Dr. Watson for not knowing how many steps led up to their rooms at 221B Baker Street. It's something Watson must have passed hundreds of times, but he never thought to pay attention to how many steps there were as he ascended the staircase to that fabled sitting room.

How many times are we presented with anlaytics or data, but we don't appreciate what they're telling us? We miss the true impact because we're not focused on the right thing. Or perhaps because we're distracted by something else.

In another adventure, Sherlock Holmes finds a wax vesta half burned, which was so coated with mud that it looked at first like a little chip of wood.


“I cannot think how I came to overlook it,” said the Inspector, with an expression of annoyance.
“It was invisible, buried in the mud. I only saw it because I was looking for it.”


Whether you have an analytics team or you're responsible for looking at business metrics yourself, you need to first understand what it is that matters and what you're looking for to help determine your success. That is, you need to prepare for what's ahead in order to be able to discern the essential from the incidental.

You've heard the phrase "a canary in a coal mine." This is a metaphor for advanced warning of some danger. It originated from the times when miners used to carry caged canaries while at work. If there was any methane or carbon monoxide in the mine, the canary, being smaller and more sensitive to minor changes in the atomosphere, would die before the levels of the gas reached those hazardous to humans.

For example, when I worked at Ford, we knew that sales of Ford's F-Series trucks were tied to the performance of the U.S. economy overall. The thinking is that since many small business owners and contractors buy the F-Series (the best selling-vehicle in the United States), they're tied to home construction, which in turn is a factor in the economy.

At the same time, what you're not measuring can be more important than what you are measuring.

In another story, Sherlock Holmes had looked over the crime scene, questioned the household staff, and prepared to leave. It was clear that Holmes was onto something, but the local inspector was still baffled. He asked,


It's the same concept as a black hole. Scientists can't observe black holes directly. Telescopes that detect x-rays, light, or other forms of electromagnetic radiation can't pick up a black hole. Instead, scientists study the effect of black holes on other matter nearby. Certain movements or absence of something they were expecting can indicate the presence of a black hole.

So, how can you accurately determine the impact of a new product design or customer experience? Certainly by surveying customers and documenting their level of satisfaction before and after the change. The problem that that metric is that it can be biased, as those who are willing to answer might be skewed one way or another. Or they might not disclose their true feelings. But how can you put a dollar value on that?

Another way is to measure what doesn't happen: perhaps there are fewer calls to your customer service department, fewer returns at the store, or a shift of interactions with customers from phone to messenger bots. All of these indicate a change and can result in lower costs.

Analytics aren't always obvious — the indicator of your success might not come directly from your own work, but from the impacts that your work makes elsewhere.

You just need to know where to look.