The Kinds of Interactions That Grow Your Business 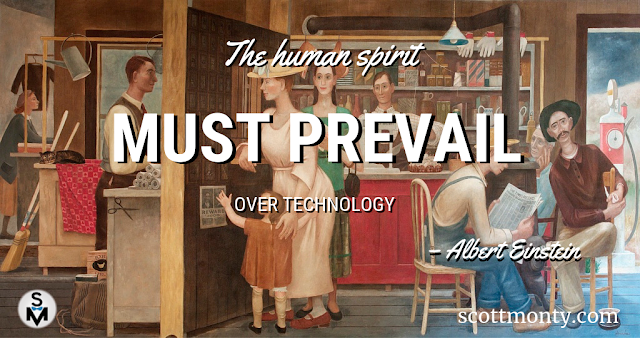 You need a pickle barrel.

I grew up in a small town in Connecticut — the kind with a town green and a white steepled church, population 10,000. And I remember going with my mom or dad to the bank and the post office, and the teller or clerk behind the counter would know them by name. They might even ask how I was doing in school or on my baseball team.

It seems like a data-driven fantasy now, but those were the days when you didn't need three forms of ID to pick up your mail or make a withdrawal. It was simply the way business was done.

Going back a few generations, the general store was a center of small town life, where citizens would go for supplies. But more than being simply a retail shop, it was a place to see fellow residents, swap stories and even hear some gossip over the pickle barrel — a large, wooden barrel where pickles floated in brine and you picked one out. Typically, there was someone seated nearby, just watching, or maybe playing checkers.

They knew you; you knew them. Maybe they'd strike up a conversation with you. Or make a remark to the clerk behind the counter. But it felt like an extension of family. When you walked away from the general store, you felt like a person and not a number.

Outside of interacting with a small business, when is the last time you had a brand experience like that? These days, we're left to felt like we're a statistic or a cog in a system. Two forms of ID, login, and an encrypted password later, we're left feeling dehumanized.

We were told that the great promise of social media was that it had the potential to bring back the humanity in business. In its earliest days, we heralded the opportunity to have conversations with customers, to get feedback from them directly, and to create 1:1 (or at least 1:few) interactions.

And yet…  Where do we stand with that progress?


Every time a new social platform opens up, it falls prey to marketers. Now, I don't begrudge a company from making money, and there are few options for social networks that don’t include some sort of advertising, but it somehow feels like Groundhog Day. The Internet has been around for two decades, and yet we're seeing the same kinds of advertising that were prevalent when television was introduced. There has to be a better way.

Back when upstart Ello cast themselves as a Facebook alternative, they proudly declared their distinct lack of advertising:


"Advertisers buy your data so they can show you more ads. You are the product that’s bought and sold.
We believe there is a better way. We believe a social network can be a tool for empowerment. Not a tool to deceive, coerce, and manipulate — but a place to connect, create, and celebrate life."


While it didn't result in a huge influx of users from Facebook, it did create a industry-wide conversation about the relevance of advertising on social platforms.

Aside from platforms, advertisers themselves are under pressure with a huge increase in the use of ad blocking technology. The interruptive and annoying user experience is angering consumers, and they're increasingly making the decision to install software to prevent advertising from taking over their browsing experience. This is especially true on mobile, where there's even less real estate and there are concerns with data usage by ad units.

The point of all of this is that while advertising is still a necessary part of the content ecosystem online, we marketers need to find a better way to meet the expectations of consumers. The decades-old, twice-broken model of advertising is outdated — the interruptive model didn't work for television, and it made its way to the Internet, and eventually to social media.

We need to wake up to the need for human interaction and stories. Simply advertising to them is lazy. Perhaps it means a more hands-on style with a focus on community rather than on advertising. There's value in creating connections and leveraging relationships, especially when we have products and services that people genuinely care about or want to tell others about.

With the incredible amount of data that we have on consumers, we stand at a threshold of personalized content that can be better than it's ever been before. But we need to take the time and effort to create it. If we want to create an emotional connection with consumers and leave a lasting impact, mass marketing is no longer the way forward. We need to show the humanity behind the brand and demonstrate an interest in connecting with consumers the way they want to engage.

Then maybe we'll be able to reclaim the pickle barrel conversations.