Resoluteness in the Face of Adversity


With the Arctic cold bearing down on much of the Midwest and Northeast this weekend, it seems appropriate to remember the British explorer Robert Falcon Scott.

In 1910, Scott famously set out to be the first to reach the South Pole. He had previously undertaken an expedition to Antarctica in 1901. Only 50 years before did Arctic exploration command the attention of the world's explorers:


"Imagined yet unseen, the Arctic functioned for the nineteenth century much as the moon and outer space did for the twentieth: a place where, against a backdrop of nameless coastlines and unfamiliar seas, the human drama was enacted in its most condensed and absolute form."

And the human drama played out in full with Captain Scott. His team of five, after enduring harsh conditions, reached the South Pole on January 17, 1912 — only to discover that Norwegian explorer Roald Amundsen and his party reached it just five weeks prior.

The 800-mile march back was monotonous and depressing for the group. They were without vehicles, horses, or dogs, and had to make much of the journey on foot. They battled frostbite, fatigue, and ultimately, a blizzard.

The blizzard stopped them just 11 miles short of their destination. But throughout, Scott kept a diary. He made notes on their progress, charted their distance, and pondered the meaning of their efforts.


"Had we lived, I should have had a tale to tell of the hardihood, endurance, and courage of my companions which would have stirred the heart of every Englishman. These rough notes and our dead bodies must tell the tale."

"we shall stick it out to the end but we are getting weaker of course and the end cannot be far. It seems a pity but I do not think I can write more. —"

"Last Entry
For God's sake look after our people" 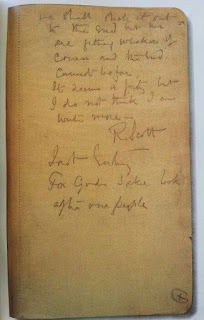 It's easy to focus on victories, isn't it? The sweet taste of success lingers, and we make it part of our regular storytelling.

But how we react when things don't go our way is more instructive. If we want to learn, that is.


"Success consists of going from failure to failure without loss of enthusiasm."
– Winston Churchill [tweet this]

That sense of resolution — and remember I talked about truly committing to your resolutions recently — is exactly what helped Scott keep his promise as an expedition leader right up until his dying day.

It got me to thinking about the root word, "resolute," which in turn reminded me of the HMS Resolute, the a mid-19th-century ship in the British Royal Navy, specially outfitted for Arctic exploration.

The Resolute became trapped in the ice and was abandoned in 1854. Recovered by an American whaler, the ship was returned to Queen Victoria in 1856. Timbers from the ship were later used to construct a desk which was presented to the President Rutherford B. Hayes in 1880.

You may have heard of the Resolute desk — the desk made famous by little "John John" Kennedy crawling out from under it — it has been used by many presidents in the Oval Office, and undoubtedly represents the connection with Great Britain, America's sense of exploration, and the determination of our leadership.

If Captain Scott can keep writing in his diary with frostbite in his extremities and death looming, we can recover from a social gaffe, a campaign failure, or a bad job situation.


To suffer woes which Hope thinks infinite;
To forgive wrongs darker than death or night;
To defy Power, which seems omnipotent;
Neither to change, nor falter, nor repent;
This… is to be
Good, great and joyous, beautiful and free;
This is alone life, joy, empire, and victory.