On Wednesday, December 5, 2018, America had a national day of mourning to mark the passing of George H.W. Bush, 41st President of the United States.

So much has been written about his life and legacy in the past few days, but one thing stood out to me, and I'd like to reflect on it here with you, if you'll allow it. 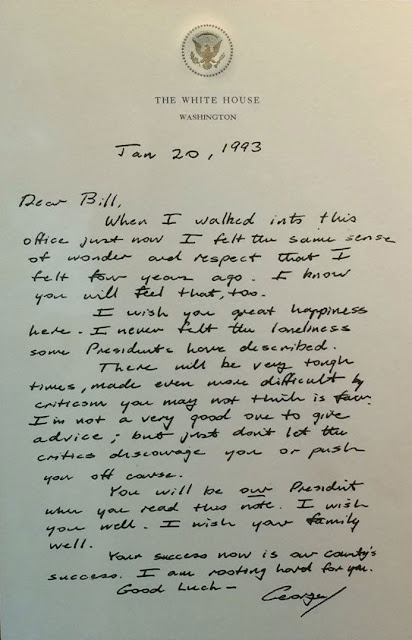 When I walked into this office just now I felt the same sense of wonder and respect that I felt four years ago. I know you will feel that, too.

I wish you great happiness here. I never felt the loneliness some Presidents have described.
There will be very tough times, made even more difficult by criticism you may not think is fair. I’m not a very good one to give advice; but just don’t let the critics discourage you or push you off course.

You will be our President when you read this note. I wish you well. I wish your family well.

Your success now is our country’s success. I am rooting hard for you.


Just imagine leaving a kind and gracious note for someone who has handed you the worst defeat of your professional life.

As Jay Baer might say, that's how you Hug Your Haters!

Shock and awe. Surprise and delight.

You've heard the phrases before: those that indicate we're astonishing someone with something unexpected. When we come out of left field and make someone feel special when they're least expecting it.

If done well (assuming people like certain surprises), it can drive brand loyalty and create a fanbase.

I was reminded of this when I witnessed all of the praise being heaped on George H.W. Bush following his death of Friday, referring to his decency and kindness. It's a little unnerving to think that decency and kindness are rare or out of the ordinary, but here we are.

We've seen it happen in the world of digital and social media as well.


But why make this the exception? Why not aim for making this a regular way of doing things?

The question is: can you scale it and make it happen again and again? That's the crux of the book Talk Triggers by Jay Baer and Daniel Lemin.

They identified four criteria that result in talk triggers, or built-in differentiators that create customer conversations: be remarkable, relevant, reasonable, and repeatable.

Because you need customers and employees to appreciate you for the culture and experiences you create on a regular basis, not the exceptional stand-alone efforts that are just stunts.

Once you get beyond the surprising, then you're just left with the delightful.

And isn't that what everyone wants?