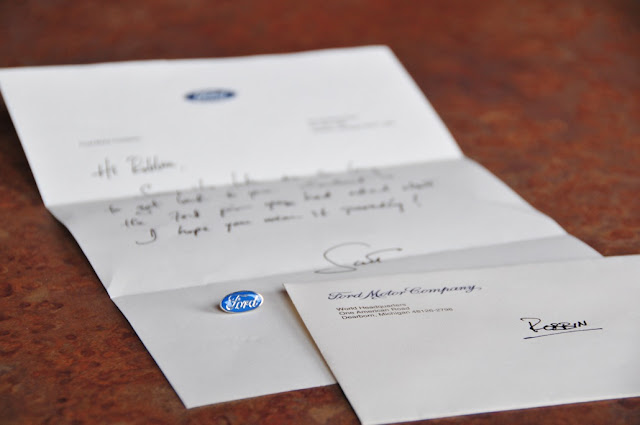 The world could do with a little less technology.

I'm not trying to be a curmudgeon like Dr. Conrad Gessner. It's just that every now and then (hopefully more now than then), it's helpful to put down the device and talk to a real human being.

And yes, I recognize the irony of me saying this to you over the Internet.

We've gotten to such a point when people are pleasantly surprised when they're referred to by name or when they receive a handwritten letter. It's counter-intuitive, since we live and breathe text messages, PMs, DMs, emails, and more.

But to me, the spirit of personalization and the power of analog are alive and well. It's why I keep a collection of fountain pens and stationery on my desk. And I make a habit out of sending real physical notes to people every week.

That level of effort and personal touch speaks volumes to those who receive it. It's not only out of the ordinary, but it tells them that they matter to you.

The photo above is one of my favorites. It's from nine years ago, and it represents a gesture that I didn't think much of, but that meant a great deal to the recipient.

I met Robbin Phillips at an event in Minneapolis, and she noticed my Ford lapel pin. During our conversation, she said she'd like one too, so I took her card, slipped it into my pocket, and continued the conversation.

When I arrived back in Detroit, I wrote Robbin a short note, including a pin in the envelope, and sent it to her. That's pretty much where I thought the story would end.

Well, it turns out that the interaction and simple gesture meant a great deal to Robbin — so much so that she took a photo and wrote up her impressions on her site:

Okay. It’s official. I am a Scott Monty groupie. Have been from our very first conversation. Yeah. Yeah. It was twitter talk.

Now stop. Before you roll your eyes again, this is a really good story.

Back in August, I had the chance to meet Scott in person. There he was in his white bucks with a blue Ford logo neatly pinned to his lapel and well, I said what any good groupie would say:

He asked for my card, slipped it into his pocket and we talked briefly.

Scott asked me what I drove. I told him (not a Ford). There was laughter. (I am a frustrated wanna be race car driver.) Then he asked the big question, “Would you ever consider buying a Ford?”

And you know what – here’s is the truth. I would.

Something about “knowing” someone at Ford has made me a sincere fan. I’ve even found myself defending them on occasion, in one on one conversations and even to large groups. I have just grown – well — fond of them.

And I can’t for the life of me figure out what changed other than the fact that there is this very real, very approachable “social butterfly” type of guy named Scott in the mix. Would my feelings for Ford change if he went away?

I applaud Ford for putting a person front and center. So many brands are just jumping on the social media bandwagon without a strategy. But Ford has one and in my humble opinion they are being pretty true to it: Ford simply wants to “humanize the brand”. Second time I have repeated that here because, I love the simplicity of that. And because I know this; people trust people. People who make and keep promises.

So a pin (and a sweet story) today, a car tomorrow?Who knows?

In the meantime, I will wear my pin proudly and create a little Ford “visual buzz” along the way…

Thanks. Scott. Oh. And you too, Ford.

While it's possible to give customers deep discounts, or to put contracts in place with expensive influencers, these tactical marketing efforts are tenuous and temporary. Why? Because you've purchased a behavior.

But what is affection?

Typically, it's the way a parent feels toward a child, or perhaps the way an owner feels toward a pet. It signifies security, protection, and comfort for the receiver of the affection. It also allows the recipient to learn and grow.

What's behind the absence of affection, then? Since affection is unilateral—that is, there's no expectation that the affection is returned—the absence of it can be viewed as selfish. When brands are simply seeking a transaction, it can feel as if they're withholding affection as a condition of a customer's action.


"Affection is responsible for nine-tenths of whatever solid and durable happiness there is in our lives."
— C.S. Lewis, The Four Loves (click to tweet)

When customers, employees, friends and colleagues don't expect to hear from you is when a simple gesture matters. While databases, algorithms, and other systems can help you remember when someone's birthday or anniversary is, or when they've achieved a life events, it's still up to you, the human, to place a call or write a note.

We can teach machines how to learn, how to respond to questions, how to perform mail merges, and how to anticipate our needs, but we can't teach them to do what it takes to be truly human: that is, to feel and express emotions.

That's entirely on you.