Why You Need to Put the Past in Context 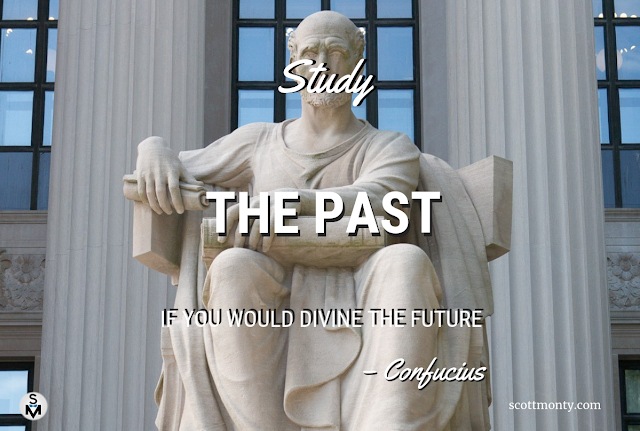 The Declaration of Independence. The Constitution. The Bill of Rights. President Ronald Reagan's speech card from remarks made in Berlin, Germany in June 1987. The arrest warrant for Lee Harvey Oswald.

These are just some of the artifacts you'll find inside of the National Archives in Washington, DC.

But step outside, and there's something even more impressive: four sculptures that tower nearly 25 feet above ground. And three of them are relevant for our story today: Past, Future, and Heritage.

On the face of the pedestal of each statue is a different quote, unattributed. Each has relevance to what we need to keep in mind in marketing and business today.


How different the world is today – and how little humans have changed.

Step Into My Past

When I was an undergraduate at Boston University, I majored in classical civilization – the study of ancient Greek and Roman culture. I was exposed to the greats of philosophy, history, biography, drama, architecture and more. And yet it's only been in recent years that I've come to deeply appreciate my education.

One of my courses was "Classical Tradition in American Culture," taught by the venerable Meyer Reinhold, who was already in advanced years at the time. In this class, we explored the various classical works that influenced the Founding Fathers, from the documents they crafted to found the country, to the art and architecture in cities throughout America in the late 18th century.

My thesis was on classical sculpture in the Federal Triangle in Washington, DC, and that naturally led me to the National Archives building.

And just as Jefferson, Madison, Adams, Hamilton and others took their inspiration from ancient civilizations and those of more recent history, the statues at the National Archives, carved in the 1920s are also a throwback.


How different the world is today – and how little humans have changed.
[Click to tweet this quote]

Past is an old man gazing down the corridors of time. On his lap is a closed book representing history. And inscribed on the front of the supporting pedestal is a paraphrase of Confucius that reads: “Study the Past.” The original from the ancient Chinese philosopher is "Study the past if you wish to divine the future."

Future is young woman gazing forward, contemplating the things to come. She holds an open book, symbolizing a story that is not yet written. On the pedestal beneath is carved "What is Past is Prologue," from William Shakespeare's The Tempest.

And finally there's Heritage, a woman wearing a snake-bordered robe, holding a child in one arm and an urn of ashes in the other, with wheat in the background. This symbolizes our country, future generations, and past generations. The quote on this pedestal is from abolitionist Wendell Phillips: “The heritage of the past is the seed that brings forth the harvest of the future."

In each case, we're told to pay attention to what has happened before our time, for it's there that we can find the key to unlock the secrets of the future.


"To be ignorant of what occurred before you were born is to remain always a child."
– Cicero [Tweet this quote]


How many of us marvel at the technology that powers so much of our lives today? The cars we drive. The mini-computers we carry in our pockets. The words you're reading right now that I published over the Internet.

But behind all of that are time-tested needs and behaviors of humans that we've had since the very beginning of history. If we stop and take the time to understand the underlying motivations and machinations that drive busy consumers, we'll find that we still want the same things we always have.

There's no need to reinvent what already exists, whether it's from an ancient philosophy text or a business practice from the 1940s (you'll recall the Fuller Brush Credo from a few weeks ago).

And then we can dispense with shiny object syndrome, or recreating a process or campaign that's been done before. If we can repurpose historical knowledge and events, giving it context to the world around us today, we can save time – and be sure that we're not just fad-chasing.


Well class, that's it for today's history lesson. In our next installment, I'll be moving on to give you some examples of how all of this plays out in the retail industry today.