Emotional Intelligence and the Power of Silence 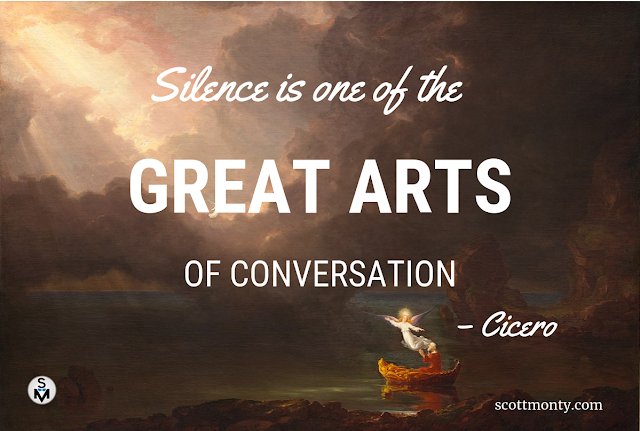 Who's a leader that has influenced you?

It could be someone famous, like a politician or business executive from the past or present. Or maybe you've got someone in mind who you worked with.

And what is it that makes them stand out to you? Maybe it's the way they spoke. Or how they were able to take something complex and make it easier to understand.

When you consider whatever those elements were, I'll almost guarantee that your inspiration had a high degree of emotional intelligence, or EQ.

For me, that leader was Andy Ferrara. Andy was my CEO at Boston Healthcare Associates and his leadership style was calm and reassuring. And the one trait that he displayed that captured my attention the most was his silence.

We'd all be in a meeting – the whole company – and he would just sit there, silently.

How does silence equate with great leadership? It's part of the makeup of emotional intelligence .

We've discussed emotional intelligence before – both here and on The Full Monty podcast (Episode 11).

You'll recall that taking stock of your own emotions and those of others takes a certain degree of maturity. And your emotional quotient, or your EQ, can be broken down into four key elements for shorthand:

Being a good leader means having a sense of the world around you and what your role in it should be.

And often times, what you don't say speaks far more loudly than what you do say.

When so many bits of information are flying around, both online and off, and attention seems scattered, it's easy to offer a knee-jerk reaction and spout something off. We've seen "tweetstorms" from various executives. They're not pretty.

As an emotionally-intelligent leader, you should be aware of yourself, your colleagues, and your environment. Your colleagues and employees look to you to set an example, and when you're able to refrain from mouthing off, it shows that you're in control of yourself, which in turn demonstrates that you have the ability to be in control of your company.

Just this week, I heard Doris Kearns Goodwin on the radio, discussing her new book Leadership in Turbulent Times. She draws conclusions from her previous researches on Abraham Lincoln, Lyndon Johnson, Theodore Roosevelt and Franklin Delano Roosevelt. Namely, they each had the ability to be self-aware, self-reflective, to show humility, and to learn empathy through adversity. All hallmarks of emotionally-intelligent leaders.

But they also observed the situation around them and listened closely to their advisors – indeed, Lincoln even assembled his cabinet based on differing opinions. Kearns Goodwin's book on that was Team of Rivals.

So how was it that Andy's silent approach in meetings made him an exemplar for me?

When there was discussion about some topic that affected the company, Andy let everyone have their say. He didn't interject. He didn't interrupt. He just sat there and observed.

Only after everyone had spoken would Andy chime in. And he did so with great wisdom, having the benefit of being able to process the input and consider his words carefully.

If you think you need to have something to say about everything, think again. The quips, retorts, and wise cracks may be good in lighter situations, but when people look to you for leadership, they expect you to be a sage.

And being the wise one in the room means observing, taking in information, assessing the mood, and knowing how your reaction will be judged. In some cases, your absence of witticisms may be the wisest reaction.

Think about that the next time you're tempted to immediately offer your not-so-humble opinion.

Remaining silent may be the one thing that speaks volumes.