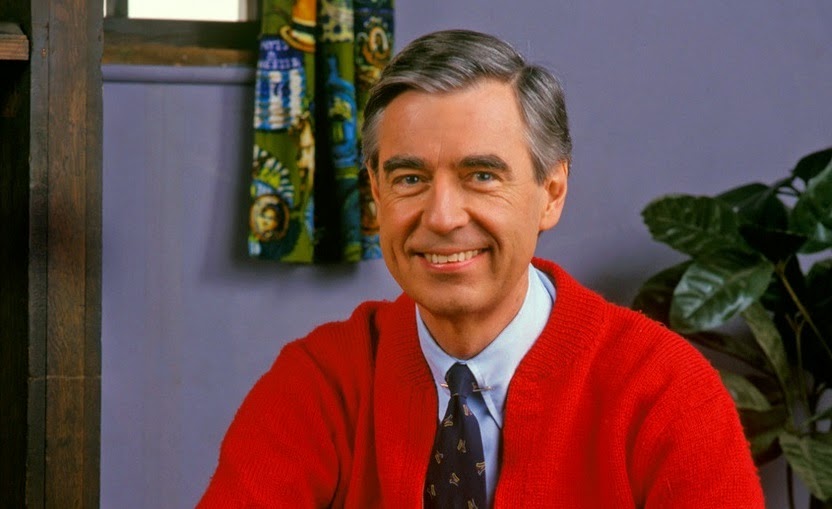 It may seem odd to look at the mild and kind Mister Rogers as an example for leadership. After all, most leaders we admire have traditionally been those who are forceful, deeply charismatic or visionary in some way. A simple Google image search of those terms picks up the likenesses of John F. Kennedy, Steve Jobs, and Captain Kirk (!) in one grouping.

Fred Rogers (1928-2003) was a minister and a television personality who, over the course of his three decades on PBS, touched the lives of millions of children and adults alike. With his gentle demeanor ("a voice that sounds adult to the ears of children and childish to the ears of adults," according to Tom Junod), sneakers and cardigan, he doesn't seem to fit the mold of what we typically think of when we imagine a leader.

I recently had the occasion to read a profile of Mister Rogers by Tom Junod in the November 1998 issue of Esquire, titled "Can You Say...Hero?" I'm not one who takes to hyperbole, but I can honestly say that Junod's piece is one of the most well-written and touching long-form articles I've read in a long time. If ever. 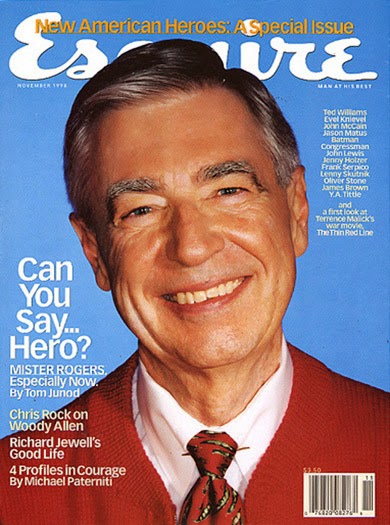 As I've grown, both as a professional and as an individual, I've come to appreciate Mister Rogers and his teachings more deeply. When I graduated from Boston University, Fred Rogers was there to give the invocation, and at the time, I enjoyed his presence with something of a happy nostalgia for my childhood. But since I became a father, I came to appreciate the simple yet deep wisdom of Mister Rogers as I think about the world that my children will inherit.

The Esquire profile made me reflect on all of those things and more: who I am as a person — a husband, a father, a son — and as a professional. It struck me that Mister Rogers, in his gentle, caring way, had attributes that made him a truly great leader.

We can all take a page from the book of Mister Rogers by looking at the way he showed and shared his true self with others.

It didn't matter whether you were a child, an adult, a captain of industry or a thief; Mister Rogers respected everyone. He listened to people and made it clear that he heard them. By all accounts, he was thoughtful and personal, and he gave of his limited time freely. From the fan mail that he answered himself – every single letter – to the routine of praying for other people daily, to Mister Rogers, everyone deserved his attention and respect.

It was impressive to see the reaction he got when, during his Daytime Emmy Lifetime Achievement Award speech, he requested the audience to take 10 seconds of silence to think of those who helped them achieve what they did:

When he was inducted into the Television Hall of Fame, he was greeted by a surprise visitor - Jeff Erlanger came out onto the stage in his electric wheelchair. This is the same person who was on Mister Rogers' Neighborhood as a guest some two decades prior, for whom Rogers had shown such compassion and feeling.

When some ophthalmologists asked him for help with a chapter on how to treat children who might be scared by a procedure, closing their eyes, or simply the dark, he avoided all of the technical jargon or child psychology that he could have so easily relied upon. He simply tapped into the feeling within them, writing, "You were a child once, too."

But the story that does an even better job of demonstrating this extraordinary gift of empathy is a longer one from the Esquire piece. Junod tells us of a boy who didn't like himself very much:


"He was born with cerebral palsy. Cerebral palsy is something that happens to the brain. It means that you can think but sometimes can't walk, or even talk. This boy had a very bad case of cerebral palsy, and when he was still a little boy, some of the people entrusted to take care of him took advantage of him instead and did things to him that made him think that he was a very bad little boy, because only a bad little boy would have to live with the things he had to live with. In fact, when the little boy grew up to be a teenager, he would get so mad at himself that he would hit himself, hard, with his own fists and tell his mother, on the computer he used for a mouth, that he didn't want to live anymore, for he was sure that God didn't like what was inside him any more than he did. He had always loved Mister Rogers, though, and now, even when he was fourteen years old, he watched the Neighborhood whenever it was on, and the boy's mother sometimes thought that Mister Rogers was keeping her son alive. She and the boy lived together in a city in California, and although she wanted very much for her son to meet Mister Rogers, she knew that he was far too disabled to travel all the way to Pittsburgh, so she figured he would never meet his hero, until one day she learned through a special foundation designed to help children like her son that Mister Rogers was coming to California and that after he visited the gorilla named Koko, he was coming to meet her son.

"At first, the boy was made very nervous by the thought that Mister Rogers was visiting him. He was so nervous, in fact, that when Mister Rogers did visit, he got mad at himself and began hating himself and hitting himself, and his mother had to take him to another room and talk to him. Mister Rogers didn't leave, though. He wanted something from the boy, and Mister Rogers never leaves when he wants something from somebody. He just waited patiently, and when the boy came back, Mister Rogers talked to him, and then he made his request. He said, "I would like you to do something for me. Would you do something for me?" On his computer, the boy answered yes, of course, he would do anything for Mister Rogers, so then Mister Rogers said, "I would like you to pray for me. Will you pray for me?" And now the boy didn't know how to respond. He was thunderstruck. Thunderstruck means that you can't talk, because something has happened that's as sudden and as miraculous and maybe as scary as a bolt of lightning, and all you can do is listen to the rumble. The boy was thunderstruck because nobody had ever asked him for something like that, ever. The boy had always been prayed for. The boy had always been the object of prayer, and now he was being asked to pray for Mister Rogers, and although at first he didn't know if he could do it, he said he would, he said he'd try, and ever since then he keeps Mister Rogers in his prayers and doesn't talk about wanting to die anymore, because he figures Mister Rogers is close to God, and if Mister Rogers likes him, that must mean God likes him, too."

His legendary fight for the funding of public broadcasting is an example of Rogers being able to share his passion to others through storytelling. He used personal anecdotes, songs and stories of progress in his chosen profession. It moved Senator Pastore to restore funding to the Corporation for Public Broadcasting on the spot. Watch the video to see Fred Rogers' full impact on a United States senator.

For Fred Rogers, the days in his neighborhood were truly beautiful. He looked for the positive aspects of everything, including of others. His encouragement and cheerfulness, which to the disaffected might seem saccharine, were genuine and thoughtful, yet were far-removed from the Land of Make Believe and more closely aligned to the realities that we all live with.

For example, during the school shooting in Newtown, CT and the bombing at the Boston Marathon, we saw a quote from Mister Rogers that seemed to give us — particularly those of us with children — the ability to look at the world with hope rather than dread:


"When I was a boy and I would see scary things in the news, my mother would say to me, "Look for the helpers. You will always find people who are helping." To this day, especially in times of "disaster," I remember my mother's words and I am always comforted by realizing that there are still so many helpers – so many caring people in this world."


We were fortunate to have Fred Rogers with us as a role model that shaped young minds. He was, in his own words, someone who "helped you become who you are...who cared about you and wanted what was best for you in life."

His lessons are equally as applicable for adults inside and outside of the business world. When you're a leader who is trying to make a change – whether it's organizational, operational, or technological – all that really matters is the culture you set. You set the culture of an organization by the behavior you demonstrate every single day.

There will only ever be one Mister Rogers. But we can model aspects of his behavior to become our best selves and show that to others.

After all, it's what he wanted.


Bonus: the trailer for the documentary Won't You Be My Neighbor?