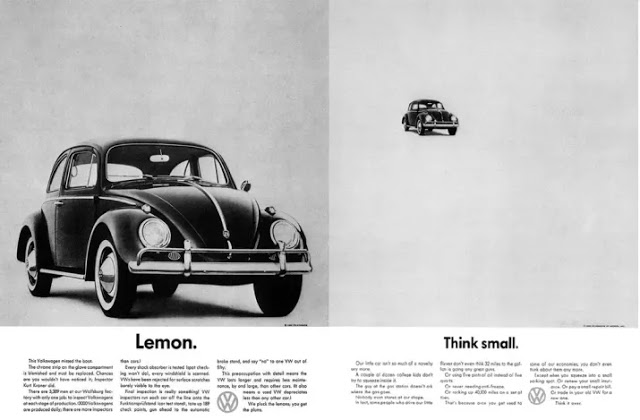 Apropos of nothing, I was thinking of some of the great Volkswagen ads of years past.

Volkswagen was known for its unusual style, from the famous "Think Small" ad that called out the Beetle's diminutive size as its strength, to the "Lemon" ad in with minimalist, black and white format that featured unretouched images of the car. Fast forward to the last few years with "The Force" commercial from the Super Bowl featuring a kid dressed as Darth Vader trying to move things by virtue of telekinesis.

Throughout its history, VW has had a sense of humor — largely about itself. It's been unafraid to poke fun at itself, its quirkiness, and uniqueness. And its drivers go right along with it. Why? Well, because for one thing, self-deprecating humor involves a degree of honesty. And when consumers sense that you're being honest with them, it makes them trust you.

I was just reading an article about what consumers want from brands — it's not what you think. Research among some 5,000 consumers and their perception of brands indicated that there are just four kinds of emotionally compelling content that will get people to pay attention to you online: content that is funny, useful, beautiful or inspiring.

And it's not as if this is new to the Internet. This is an indication that runs far deeper. These are the things that have moved us as a human species for millennia. And are likely the same things that will fuel our interest until we leave this planet.

Which brings me back to what caused this train of thought in the first place.

In 1969, Doyle Dane Bernbach (DDB) marked 10 years as Volkswagen's ad agency with the commercial that David Ogilvy called the funniest commercial he'd ever seen. Simply titled "Funeral," it was the reading of the last will and testament of Maxwell E. Snavely (cleverly named in part after Maxwell Dane of DDB):


I, Maxwell E. Snavely, being of sound mind and body, do hereby bequeath the following:

To my wife Rose, who spent money like there was no tomorrow, I leave one hundred dollars. And a calendar.

To my sons Rodney and Victor, who spent every dime I gave them on fancy cars and fast women, I leave fifty dollars - in dimes.

And to my other friends and relatives who also never learned the value of a dollar, I leave a dollar.

Finally to my nephew Harold, who oftimes said "A penny saved is a penny earned," who also oftimes said, "Gee Uncle Max, it sure pays to own a Volkswagen," I leave my entire fortune of one hundred million dollars.


How are you being funny, helpful, beautiful or inspiring to people?

Posted by Scott Monty
Labels: Advertising, content, Marketing
at 7:05 AM