Boycott This: When Media Attack 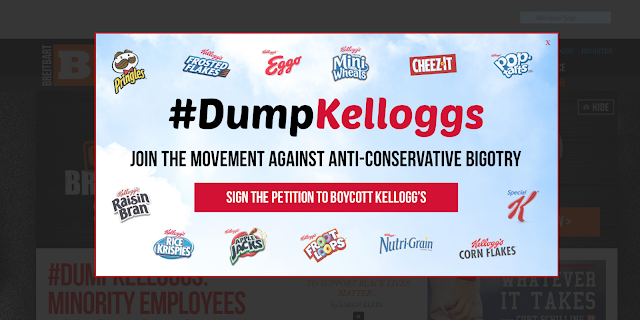 So much about the political and media cycle in 2016 has been unusual, uncommon, or unprecedented. If anyone thought this pattern would end once the election was over, the past week has offered proof that we are in a new world. We’ve been calling it a post-factual world, but things have gotten so surreal that that might not capture it adequately anymore.

The politically-themed site Breitbart.com has not just covered the news over the past year; it has often been the news. President-elect Trump tapped the site’s management and staff for much of his campaign staff and inner circle, and from all appearances, he gets much of his information or perspective based on how Breitbart covers current events. It is not a political statement to suggest that Breitbart, for better or worse, is right now perhaps one of the most influential information sites online.

This has been a source of satisfaction to some; to others, it is a source of considerable angst. Breitbart is unabashedly far-right conservative — even by its own admission — and has been the primary home for the “alt-right” community; others see the site as a harbor for various forms of extremism. Certainly, in the aftermath of the election, Breitbart’s editorial outlook and its spin on current events came under greater scrutiny than previously — leading to a brighter spotlight on Breitbart from the rest of the media, and from advertisers.

Since the election, many of those advertisers have decided to stop advertising on Breitbart, particularly as they determine Breitbart’s content and editorial outlook does not fit their corporate values. Some of the big name companies pulling ads include: Warby Parker, Allstate, Nest, the Vanguard Group, and Earthlink. And the activist Twitter account Sleeping Giants (@slpng_giants) appeared, publicly calling out all brands that were running advertising on the site.

The problem was that some brands had no idea their ads were appearing on Breitbart at all. Many of those ad placements are retargeting ads that follow you on the internet, thanks to ad tech. If you've visited a site, it or an associated ad will appear on a site like Breitbart. Google’s ad network is all over the Breitbart site, which means any business that does retargeting or audience targeting through Google could show up — and that's quite a few.

At this point, it would seem that the only way to stem the flow of advertisers appearing on Breitbart would be for the ad networks themselves to decry the site as out of alignment with their values.

But the biggest name is Kellogg’s — that good old, all-American brand that is synonymous with breakfast — and Breitbart has chosen to respond in an unprecedented way — one that should be of deep concern to marketers and to all Americans, regardless of your political outlook. When Breitbart began drawing more attention — particularly as its former editor became a senior strategist for Donald Trump — Kellogg's decided to pull its advertising from the site, stating


"We regularly work with our media-buying partners to ensure our ads do not appear on sites that aren't aligned with our values as a company."


Breitbart — a media outlet, remember — responded to the retreat by encouraging its readers to boycott Kellogg’s products, positioning the company’s decision as a declaration of “war against conservatism” and “un-American.” Breitbart News Editor-in-Chief Alexander Marlow called Kellogg's decision an "act of discrimination and intense prejudice," and indicated that Kellogg's "declared hate for Breitbart's 45 million monthly visitors."

The company started the hashtag #DumpKelloggs, plastered its website with anti-Kellogg articles, and even resorted to a pop-up display exhorting users to "join the movement against anti-conservative biogtry" which included logos of Kellogg's many brands.

Now, setting aside the irony of Breitbart — a site predicated on the intolerance of half of the political ideology of this country — rejecting the idea of intolerance against their one-sided news screeds, there's more to be concerned with here.


Politically-motivated boycotts of big name brands are nothing new. In the past few years, some that come to mind are Starbucks, Disney, and Target, which have been the target of boycotts from the right. Domino’s, Chic-Fil-A, and Hobby Lobby have found themselves in the sights of the left.

Grassroots-led political boycotts are not new in American business — and in the very polarized America of 2016 and beyond, it probably stands to reason that there will be more of them than ever in the next few years. But the Breitbart call to boycott Kellogg’s is different. And it should bother you even if you’re politically conservative by nature.

This is the first time, to this commentator's knowledge, that a media outlet has mounted a campaign to boycott an advertiser. And while people in the United States still have First Amendment rights to patronize or boycott any brand they wish, when an outlet that purports itself to be a media site — especially one with the political influence Breitbart appears to wield — such a public call for a boycott against advertisers is much more insidious.


It's unethical. It’s quite possibly illegal. And it’s most certainly dangerous.

From a perspective of journalistic ethics, Breitbart’s actions violate standard journalistic practices. Other media outlets have decided editorial outlooks, but none have ever tried to impose those outlooks on advertisers or outside businesses before. Breitbart’s call for a boycott is clearly intended to send a message that brands had better align with or support its political perspective — or face (purported) economic consequences.

Purely and simply, it’s an attempt by a political website to inflict its political outlook on brands and companies, and to generate consequences for companies that decline to support or advertise on any outlet they choose. Breitbart’s action is intended to send a message that any company not sharing its worldview may be in for a world of hurt. And they stated as much to the Associated Press when they said Kellogg's was making such a move "to its own detriment."

Now, you've seen movies about organized crime. There's a word for that kind of talk and behavior.

If you want to look extortion up in the dictionary, it's quite simply:


the crime of obtaining money or some other thing of value by the abuse of one's office or authority.


But beyond being unethical and illegal, it creates a precedent about which other brands need to be vigilant. As Rob Clark said on Twitter,

@ScottMonty short-sighted and foolish. Who is going to ever trust their ad dollars to a company willing to turn its audience against you?
— Rob Clark (@theelusivefish) December 1, 2016


Aside from the more salacious claims of extortion, Breitbart’s actions could violate laws barring unfair business practices because it is calling for a massive group boycott of an advertiser to further its competitive position. Ted Boutrous, a First Amendment lawyer at Gibson, Dunn & Crutcher in Los Angeles, said:


“It’s clearly intended to deter other advertisers from withdrawing their business and to ensure costs and prices don’t go down for Breitbart. It’s a serious issue to boycott in the commercial sphere.”


We'll see what the future holds as far as lawsuits and Breitbart, particularly as the state of California has some fairly broad anti-competition laws.

Even absent any legal action, the last laugh may be on Breitbart, though.

Their tantrum has led to a backlash against the backlash, and there is now an equally strong movement online to buy Kellogg’s products in support of the company’s decision. The hashtag #BuyKelloggs has risen and you can see photos of Kellogg's purchases all over Facebook. In fact, our family bought dozens of boxes of Kellogg's cereals to donate to local food pantries.

Maybe you can think of a creative way to support the good guys too.

When media boycott a brand,
We suddenly know where we stand.
The effects are subliminal,
And the actions are criminal
When Breitbart extends a Black Hand.

If you liked this commentary, you can listen to a version of it in my podcast The Full Monty. Subscribe via email or on iTunes, Google Play, Stitcher, Spreaker or SoundCloud.