Technology for 2016, CES is the new auto show, guess how many CMOs use digital advertising for customer insights, why people share content, Yahoo is off to a rough start, Facebook is all about Messenger this year, Twitter goes big, ridesharing woes, competitive car communications at CES, why podcasting (and email) is on the rise, content marketing tips for 2016, two customer experience blunders, new FTC native advertising guidelines, a new feature — the Chart of the Week, a new book that gets inside the minds of con artists, plus our weekly trivia challenge, the podcast pick of the week and more, it's the first edition of The Full Monty.

A roundup of relevant links affecting our industry. If you’re on Flipboard, you can get these links — and additional ones — by subscribing to The Full Monty Magazine at smonty.co/fullmontymag.


As noted in the video above, this is the first edition of The Full Monty — the newsletter previously known as The Week in Digital. If you don't yet subscribe, please make sure you're regularly exposed to it with a subscription.

We're using Facebook Mentions each Sunday evening at 9:30 pm ET to bring you 15 minutes or so of commentary and previews of what to expect from the week's newsletter. If you follow on Facebook and tune in every Sunday night, you can get a preview and join in the commentary as well. We will be off next week, due to the Martin Luther King, Jr. holiday (and a hockey tournament).

The first 2016 installment of #SundaysWithScott - live commentary and ranting before the Monday newsletter.
Posted by Scott Monty on Sunday, January 10, 2016 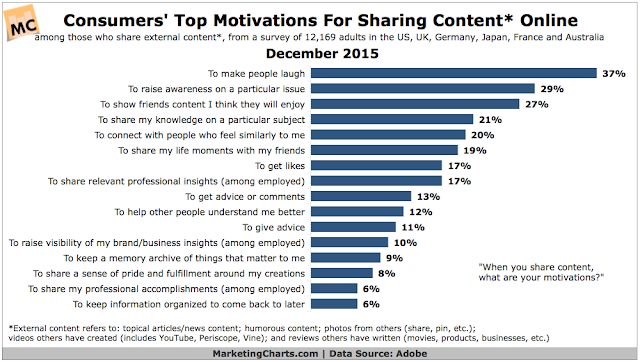 January 20th & 21st in Orlando. Learn step-by-step techniques for driving qualified leads for your clients. You’ll learn 20+ different tactics and get a 200+ page book that gives you step by step instructions. On top of that — we’ll teach you how to bundle/sell these services, give you sample proposals and contracts and much more!

"You made SEO and lead gen understandable and now we have a new revenue stream! Clients love how we can tie our efforts to their ROI and we love how they keep increasing their budgets!“

Register today so you can start selling strong in 2016.


Trivia question: When was the first in-car audio system implemented? * 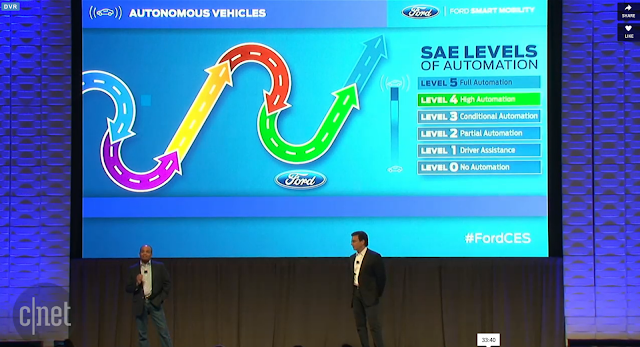 Brought to you by Zignal Labs, a realtime, cross media analytics platform.

This week, the automotive-heavy announcements at CES caught our attention. We expected much from Ford, a long-time CES attendee, which was rumored to be making a Google-related announcement. Their Amazon news, as well as their overall mobility plan they shared in their keynote was enough to create a spike that just barely peaked over Faraday Future's electric concept vehicle - although Faraday Future got more sustained volume on January 5. 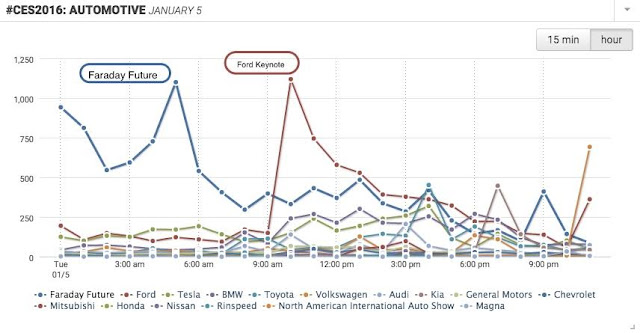 Then came Chevrolet's announcement about the all-electric and more affordable Bolt, which grabbed attention on January 6. We can see the major spike from Chevy here: 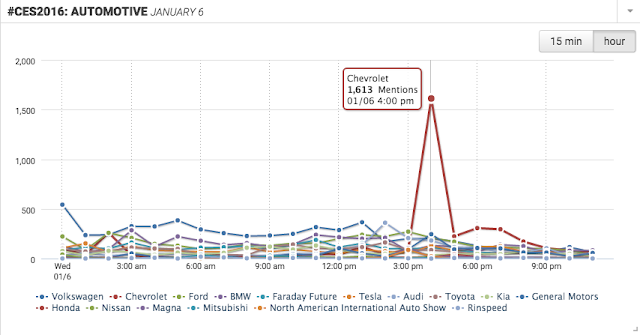 To put the two days in perspective, here's the comparison between the performance of the two major Detroit car brands against each other: 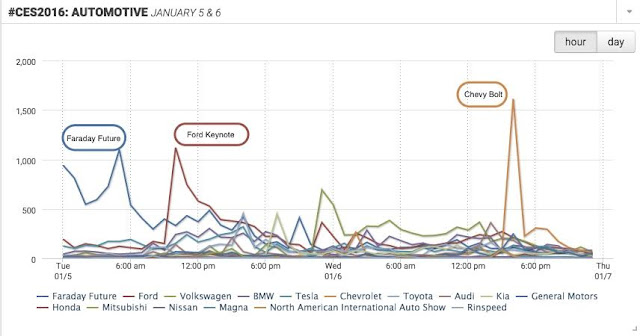 Chevy's spike is more pronounced, but Ford and Faraday Future each had some sustained conversation. Who do you think won?

Each Monday we publish this newsletter that includes a series of links about current events and trends in the worlds of technology, business, digital communications and marketing in order to keep leaders up to date on changes, newsworthy items and content that might be useful in your job. A new issue is available every Monday morning. Please subscribe to keep up to date on developments.

In case you hadn't noticed, this took a lot of time to assemble. Do you get any value out of it on a regular basis? If so, please consider becoming a patron to help support this newsletter by going to Patreon. Yes, you can pledge a dollar a month, but that's a paltry amount, don't you think?