Analytics and The Limits Of Knowledge Have you seen the More Cowbell sketch (alternative link for non-US readers) from Saturday Night Live? It’s more than just funny. Believe it or not, it’s a powerful metaphor for a successful work life. And it provides insight into the kind of people you need on your team, and what makes an effective team.

Everyone has at least one cowbell — it’s your unique, profitable talent people pay you for or your company's unique offering. It’s something people have a fever for. When you discover it and give those people a ton of it, you gain success and happiness for both yourself and others. It’s a win-win.

A cowbell is simultaneously something you love doing and something other people really want as well (although, as we’ll see, you still will have detractors and critics). A cowbell creates joy for you and other people. It makes them yell for more. They can't get enough.

Computers And Big Data Are Awesome

The Internet has given us great ways to learn more about the world and what people want and what the trends are. We love Google Trends and the Google AdWords Keyword Planner and Facebook’s Audience Insights and Graph Search. We’ve never known this much about ourselves and each other. We’ve never had more information to go on.

When you first discover these tools of Internet marketing and social media, you’re astounded by the possibilities. Theoretically, we should be able to understand our audience, reach the right people, convince them more effectively, get people what they want at a better price, and so on.

There’s No Such Thing As Perfect Knowledge

Brian found that in using website analytics for 15 years to try to track what businesses do online, there was never perfectly accurate knowledge. There were always discrepancies and questions. If you have two web analytics programs on one site, you’re going to get data that disagrees. How is that possible?

There’s a lot we don’t know. Not everything in the world is tracked. We can’t really see into people’s heads. Even MRIs don’t tell us exactly what everyone is thinking. And surveys of people reveal that they often don’t know why they do what they do.

As humans have had to since the beginning, we still must make decisions without all the facts. We have beliefs, best practices and theories. We have our intuition. We have big data and surveys. But we’re still guessing.

You fall in love with someone based on who you think that person is - maybe who you wish that person was. Inevitably, as the years progress, you find out who he or she really is. Then you have to ask yourself, “Can I live with this? Is it good for both of us?” If so, you can be married a long time. If not, divorce can be very expensive.

We like to think we listen to our hearts. Or our guts. Brian likes to say, “Listen to your gut - unless you just ate Taco Bell.” The truth is it’s an effort even to truly know our own hearts. Sometimes gut feelings are wrong. Sometimes we’re in touch with intuition and sometimes we just think we are. We’re frequently wrong.

A drunk surgeon on a plane once told Garrison, “Half of surgery is exploratory. Those anatomical drawings are a lie! They’re an approximation, at best. You open people up and they’re different in there, so you have to change your plan.”

Equally perplexing is the fact that people have vastly different immune systems. One guy is allergic to shrimp and gluten, and another guy can eat out of a garbage can in an alley and never get sick. We’re not the same. Because of this, knowledge is only half the battle. The other half is effort.

Effort Is The Great Equalizer

We humans all have different compositions, capabilities, mindsets and intelligence levels. Effort is the great equalizer. We have the ability to apply what we do have, as much as we can apply it. Who’s rich and successful? Usually the ones that make the effort. Why are some less athletically gifted athletes doing better than #1 picks? They’re willing and able to apply more. Good motor. Hustle.

Urban Dictionary defines hustlin as “havin [sic] the ambition and drive to do everything and anything to make mad money.”

In the More Cowbell sketch, Gene Frenkle, a guy who’d eaten too many burritos and bought too small a shirt, put the effort in. He played the hell out of his cowbell. Bruce Dickinson says, “I gotta have more cowbell!” Together they increased Gene’s opportunity because Dickinson fueled Gene’s effort.

When a Bruce Dickinson (a producer, mentor or manager) sees your enthusiasm, your opportunities increase. Every manager wants more employees who work hard.

Garrison once won employee of the month, although other coworkers were more productive. Why was he singled out? He worked until 10pm every day, and management noticed. It was really because he was bad at time management, and he just couldn’t get a days’s work done before 5pm. He wouldn’t leave until he got it done. But his effort and persistence were noticed and rewarded.

Brian’s favorite time to work is Friday night into Saturday and Sunday, because no one else is working, so no one interrupts him- and he feels like he’s getting ahead. Workaholism is bad if you’re a bad husband or a bad parent, but Brian and his wife don’t have kids and both love to work- so it’s perfect!


Hope Can Be An Obstacle

It's easy to unconsciously choose hope in ways that keep you from success. If you are content with hope, you might not finish something. You might go off and relax or entertain yourself instead of pushing through to success.

Those who succeed are impatient for achievement. They make it happen sooner. If you want to be more successful, you cannot be satisfied with hope or potential. You must push to get your results now. You must feel like you deserve more — now.

What this means is that when the "hope" type of person sees someone who's discontent or impatient or pushy, it could mean the latter person is a "success" type. Success types can be irritating, no question. But they are often leaders for this reason. They make sure it gets done. And execution is critical to success. 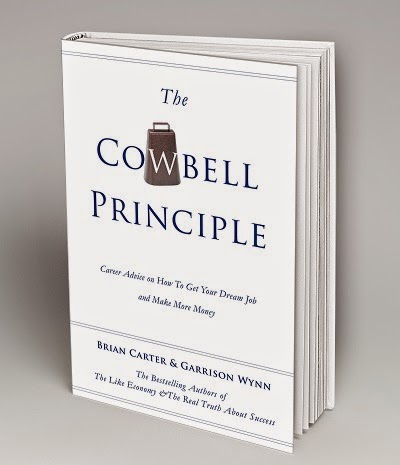 This post is an excerpt adapted by Brian Carter from the forthcoming book The Cowbell Principle: Career Advice On How To Get Your Dream Job And Make More Money, by Brian Carter and Garrison Wynn. Brian and Garrison will be giving away a limited number of digital copies at launch time. To get notified when they’re available, sign up at:
http://thecowbellprinciple.com/getnotified