Weird Al Is a Marketing Genius With #8videos8days 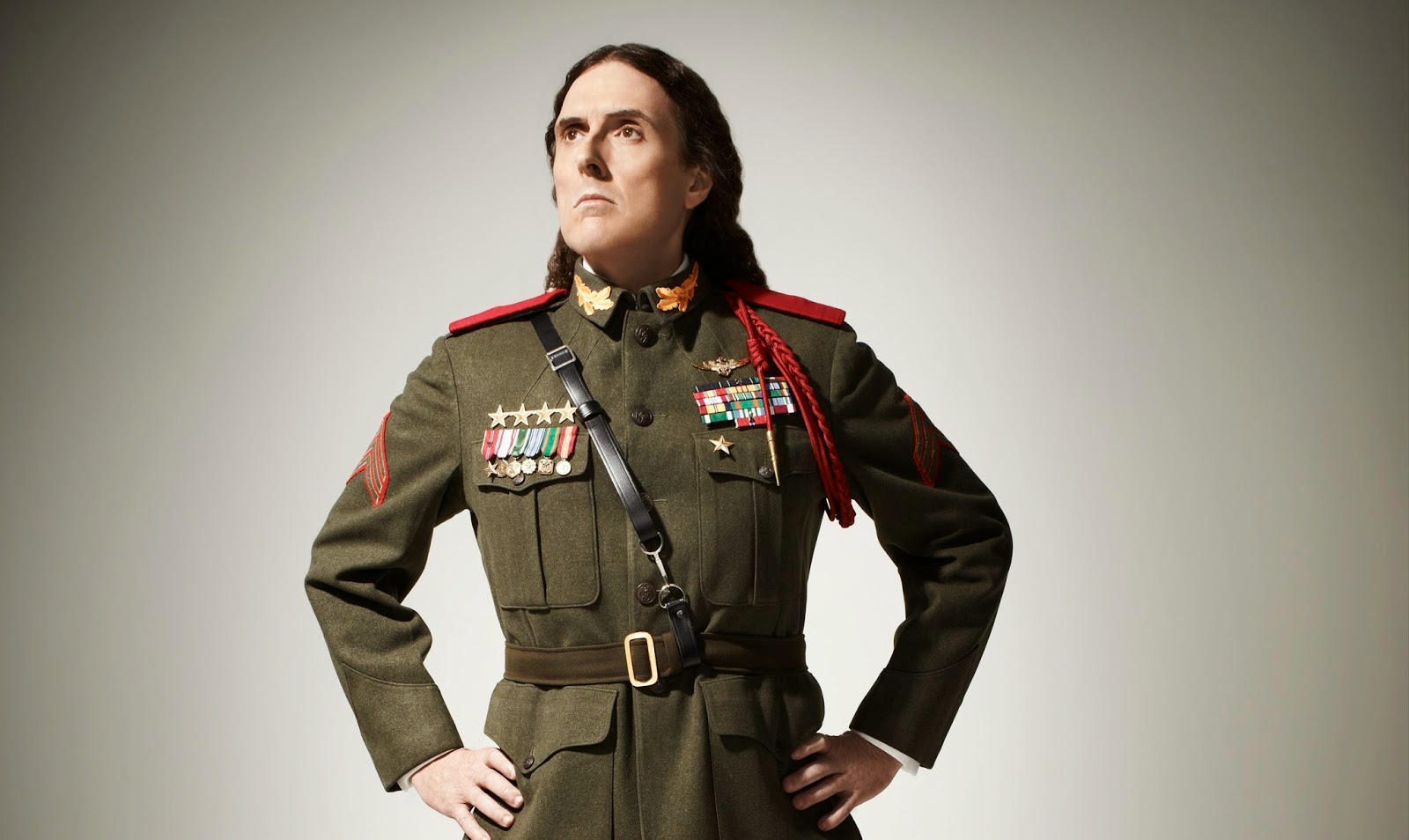 I have a confession to make. I'm huge fan of Weird Al Yankovic. Or, I'm one of what he used to call his fanbase: the Close Personal Friends of Al.

Like so many others, I first heard his music on The Dr. Demento Show. Then, I bought all of his early albums, from his eponymous debut up until Running with Scissors in 1999. I even saw him in concert during his Dare to Be Stupid tour in the 1980s. Hey, what did you expect from a fan who was trained classically on the accordion?

(I'll bet you didn't see that one coming, did you?)

Weird Al has made a living out of what had once been a hobby; he is synonymous with music parody genre. Of course, he's well known for hits like "Eat It," "My Bologna," "White and Nerdy," "Pretty Fly for a Rabbi" and "I Love Rocky Road," but in addition to song parodies, he also does parodies of styles of music,  writes his own original songs, and polkanates medleys of popular tunes. And he's been doing it consistently for 35 years.


Unlike a typical musical act, Weird Al doesn't rely on his own musical sensibilities for his bread and butter. He's a parodist, which means that with a little talent, luck and a great deal of intuition, he can select the songs that are part of (or about to become part of) the cultural zeitgeist and create funny versions that will engage his audience. If he's fortunate, he goes beyond just his fans and touches the mainstream.

One way that this is possible is through regular or recurring subjects that include Michael Jackson, Star Wars, food and television. Such topics are universally recognized, and when it comes to humor, the more broad an artist can be, the more likely he is to reach a wide audience.

For every song and video that is a parody of another artist's work, Al seeks their blessing for his work. Because parody is protected under the "fair use" provision of U.S. copyright law, he does not need permission in order to produce his work. However, in the spirit of creating good relationships with musicians, Yankovic has always made it a point to seek the personal permission of stars before publishing his parodies.

What typically happens - particularly with up and coming artists - is that they perceive such a request to be an official indication that they've reached a pinnacle in their career. In other words, when Weird Al wants to cover your work, you know you've made it.

Now, while this makes great sense from a personal/professional relationship building perspective, there's another force at play here as well. In addition to having the legal angle covered, Weird Al essentially has gotten the attention and trust of these well-known personalities, and if they approve of his lampooning of their work, they're likely to help promote the parody (because in a sense, they're legitimizing and promoting their own work as well).

Weird Al Marketing Rule #2: Create strong relationships with key stakeholders and give them something of value.

Adapting to the times

We're all familiar with the plight of the music industry. It was completely disrupted in the digital era with the advent of iPods and other mp3 players, as well as YouTube, and has resulted in artists seeing a decline in the money coming in from their album sales. Attention and time are being spent on a variety of other screens - mobile, gaming, online video, etc. and not on pure music. In fact, a recent piece on Vox noted that Aerosmith has made more money from Guitar Hero than it has from any one of its albums.

So it's not surprising to see that Weird Al Yankovic - the musician who has managed to remain relevant and capture the popular anthems of the day for three decades - is able to understand and adapt to the changes around him.

On July 15, his latest album, Mandatory Fun, went on sale. But this was anything but a cookie-cutter launch plan when "there's a pretty good chance this is the last conventional album."

The earned media blitz began with a number of features and interviews, including the New York Post and NPR on July 12 and Grantland and the LA Times on July 15, among many others. At last glance, there were over 3,600 results in a Google News search for Weird Al and Mandatory Fun.

But some of the most significant efforts came from Weird Al himself, namely on his @alyankovic Twitter account:


With over 3.3 million fans on Twitter, a YouTube account that he's had for nearly 5 years, and yes, a Facebook page, Al has a direct connection to his fans - something that every entertainer must have these days. Recently, Taylor Swift noted the changing times and how she finds that fans are less interested in an autograph than they are in a selfie with her or a tweet back to them.

Putting those channels to work during a launch is key. Weird Al realizes that he needs to be everywhere, so he's putting each of those channels to use in a launch that takes place over the course of eight days. Using the hashtag #8videos8days, he's been amping up the effort all week long to drive curiosity and attention around his new album.

It's been working: the album landed the #1 spot on iTunes just a day after it went on sale and is currently ranked as the #1 pop album on Amazon.

Each day during the #8videos8days promotion - you guessed it - a new video was revealed. But it wasn't simply Yankovic posting something on his YouTube page. In a creative and collaborative push, he took a different turn that was born out of necessity. From the Grantland interview, Al notes:


“The budgets have kind of dried up,” he said. “Back in the day, record companies were rolling in money and MTV were the kingmakers. I mean, people spent half a million dollars to do a music video. That is not happening anymore.”

Creating a music video is big business, and the way Weird Al approached it this time around was to partner with a number of sites that have been Al-friendly over the years. It's not clear if these sites provided the budgets to make the videos possible, but they've certainly served themselves up as destinations that will be a Hanukkah's-worth of viral videos.

Accordingly, the first video in the series was "Tacky" (a parody of Pharrell's "Happy") and it was launched on July 14 on Nerdist. The video features cameos by Jack Black, Eric Stonestreet, Aisha Tyler, Margaret Cho and Kristen Schaaled, who together have 1.8 million Twitter followers.

That was followed on Day 2 with the grammarian's national anthem "Word Crimes" on Weird Al's own YouTube channel:


[Personally, this is my favorite song of the entire album.]

In addition to launching the new video, Weird Al hosted an AMA (Ask Me Anything) over on reddit. As a side note, he's not just creating an account to host an AMA; "alyankovic" has been a redditor for 3 years. He participates as a regular user of these platforms.

On July 16, we were treated to "Foil," a takeoff on Lorde's "Royals," with an exclusive from College Humor. A cameo by Patton Oswald, who with his 1.8 million Twitter followers is another comedy sensation on social media. Next, Yahoo Screen was given the chance to shine with "Handy" to riff on the seemingly mindless Iggy Azalea hit "Fancy."


As the weekend drew near, Friday's feature was "Sports Song," a college fight song that could ignite the passions of band geeks and athletic supporters near and far. That was featured exclusively on Funny or Die. In conjunction with that, Yankovic answered 11 Questions on A.V. Club, a regular feature in which the site asks interesting people 11 interesting questions—and then asks them to suggest one for the next interviewee.

Weird Al Marketing Rule #4: Find the right partners to help your message reach their audiences as well as yours.


As the three remaining videos are released over the weekend and into Monday, we'll be intrigued to see how Weird Al manages to continue to use all four of his rules of marketing to have Mandatory Domination over the charts as well as our hearts and minds. For someone who has dared to be stupid and run with scissors, you're pretty smart in the marketing department. We can think of many who are even worse.

And rock on, Weird Al.