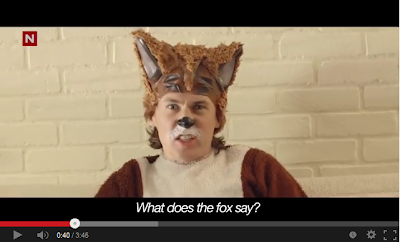 Key digital trends for 2013, the Twitter IPO, Instagram is getting ads, tweeting rumors in China could land you in jail, smartphone statistics, how brands are using social data, stop copying Oreo, the two videos that captured our collective attention and more, it's This Week in Social Media.

If you have additional links, sources or ideas that might be helpful, I'd encourage you to add some via a comment below. And if you’re on Flipboard, you can get these links by subscribing to the This Week in Social Media Magazine, which is now available on the Web.

We’ve confidentially submitted an S-1 to the SEC for a planned IPO. This Tweet does not constitute an offer of any securities for sale.
— Twitter (@twitter) September 12, 2013

What makes a video go viral? Two recent examples have captured a good deal of attention, and they couldn't be more different. There are core human elements that are common to each of them.

The first is the near-instant hit "The Fox" by the sibling comedy troupe Ylvis. Posted on September 3, the video is up to over 22 million views at the time of writing. The electronic thumping, nursery rhyme-inspired question that it asks, and cross-language appeal made it an instant hit. The ultimate arbiter: our desire to share something funny and upbeat.


The other example is far more serious yet no less interesting. Matthew Cordle made a YouTube video in which he confessed to killing a man. Despite his lawyers telling him that he could get off by lying, he said that he couldn't do that and that he wanted to do the right thing, so he would be admitting his guilt and accepting the responsibility for his actions.

In this case, rather than going for humor or even raw shock value, Mr. Cordle is taking a stand and displaying courage and accountability. While the video can serve as a public service announcement about the real impact of drunk driving, it also provides a glimpse into our legal system and represents the need for perhaps a more important public service announcement: a call for honesty and integrity amid a pervasive culture of evasiveness and blame.