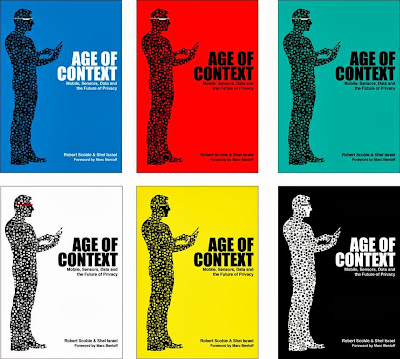 In 2006, Shel Israel and Robert Scoble wrote Naked Conversations, which largely prefaced the era of social business that we now find ourselves in. While it was centered around blogs and the ability for companies to have dialog with customers (and presumably to listen to them and learn what they want), it paved the way for social media to play a larger part in business communications.

It's now 2013 and Robert and Shel have the answer for where we're heading next in The Age of Context. They set it up by identifying the five forces in play: social, mobile, data, sensors and location. This isn't some futuristic Space Odyssey with computers with artificial intelligence; this is what we're living in right now - even if the dots aren't completely connected yet, these forces already exist everywhere around us. It can legitimately be said that now, context is king.

In the book, the authors delve into a wide array of examples and companies that are bringing these five forces to bear on their businesses - from Uber to Apple, Philips to Google Glass, and many many more. They're simply too numerous to mention here. Suffice it to say that between Shel's journalistic background and Robert's grueling schedule of interviewing entrepreneurs and executives, the book is extensively researched.

Because it's a contextually relevant to me, I'd like to take a look specifically at the Ford examples they used in the chapters around transportation. While they claim that Google's self-driving car generates 700 megabytes of data per second (incidentally, the 2013 Ford Fusion generates hundreds of megabytes of data per second already, and has over 16 million lines of code - more than Twitter and Facebook combined), they also estimate that the cloud would melt down if every vehicle generated that level of data.

I was pleased to see a smattering of Ford technology mentioned in the book. The authors certainly couldn't cover everything (there's too much, and frankly, it's not an infomercial), but they covered MyKey, one of the most popular innovations we have. MyKey allows owners to program a key fob that limits the top speed, radio volume and radio stations, and has persistent seatbelt reminders and early low fuel reminders. They also mentioned Ford's investments in Zipcar and TechShop, as well as the SYNC and MyFord Touch hands-free infotainment systems that put your phone at the center of your connected car, conforming to just about any device that is brought in.

Of course, the driverless car gets a lot of attention. It seems to capture everyone's imagination these days. What few people fail to realize is that at Ford - as well as at a number of other automakers - the dots are already in place, waiting to be connected. For example, on my Fusion, I have BLIS (Blind Spot Information System) that indicates in my wing mirrors when there's a vehicle I might not be able to see, with Cross-Traffic Alert, so I know when vehicles are approaching either side of my car from the rear. Active Park Assist can help me park my car hands-free. Adaptive Cruise Control and Lane Keeping Assist keep the car moving at a speed relative to the car in front of me and help to steer the car back in the lane if it drifts out.

All of these are technologies that can be pieced together for autonomous driving. Of course, as I told Shel, the great part about our vehicles is that people still have fun driving and prefer a hands-on experience. I'm sure that over time and for specific purposes, the "driverless" scenario will become more comfortable to people. But I'm not sure that many will simply climb in the backseat. Given the unpredictability of other drivers around us, it's probably a good idea for drivers to remain close to the wheel.

One of the things I've often heard Bill Ford talk about - as he passionately explains how the company is still delivering on his great-grandfather's promise of affordable transportation for all - is that Ford's role in the world of mega-cities may not be to provide more vehicles, but to help enable better mobility. Vehicle-to-vehicle communication and vehicle-to-grid communication will help crunch the data, using sensors and location to contextualize the driving experience and give feedback to drivers and/or their vehicles via real-time updates. It's really not that far out.


Shel and Robert also did well by interviewing K. Venkatesh Prasad, who is one of Ford's technical wizards. He leads our Open Innovation efforts, is part of our technology advisory board and spends a portion of his time at Ford's Silicon Valley office in Palo Alto. Prasad agrees that the car is the ultimate mobile device, going so far as to call it "a cognitive device."

This is important in the Age of Context, as we can't rely solely on our own human perception and interactions any more, especially when we're driving. Ford vehicles with SYNC have the ability to listen to texts and send up to 15 pre-programmed responses without the driver having to touch his or her phone - as well as the ability to put the phone in a "do not disturb" mode. But think of how much data is already being exchanged by the car and the plethora of third-party services that are out there. Making more of these automated and tuned to our driving habits (and preferences, as the car continues to be personalized) could keep drivers contextually connected with the information that's relevant without requiring them to lift a finger.

There's no doubt that Scoble and Israel are ahead of the curve when it comes to all of the possibilities out there. They proved it seven years ago with Naked Conversations, and they're likely to prove it in an even shorter period of time with The Age of Context, as the world seems to be evolving at an even quicker pace. Here's hoping that you get to experience even a fraction of the cool companies and products they've outlined in the book.

Pick yourself up a copy. But see if you can get it for cash so they can't contextually track you. ;-)