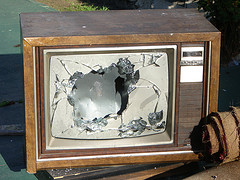 It wasn't all that long ago that we viewed TV by appointment. NBC's "Must-See TV" lineup of Thursday nights included legendary shows like The Cosby Show, Seinfeld and Cheers, among others, and audiences turned out in droves to see them.

Things are drastically different now, as you know. Beyond DVRs and on-demand viewing, we now have online options that include Netflix, Hulu and others, and cable providers like Xfinity, DirecTV and Dish Networks, not to mention specialty apps like HBO Go. We not only have a wide variety in when we view our shows, but where we watch them as well.

At the same time, we have an unrivaled number of programs and channels from which to choose. A television viewer's dream, right? On the surface, it would seem so. But a funny thing happened on the way to the remote...

If you're one of the many who watched Netflix's original series House of Cards, you were treated to something special indeed. Unlike any other show before, when the series began, the producers released all 13 episodes at once. That means that viewers who were hooked didn't have to wait for each episode to roll out, week after week.

How many times have you fallen behind on your TV watching, and you catch up with archived episodes in a marathon session? Or perhaps a friend has recommended a show that you had only half-considered, and you take to the streaming video service of your choice to view last season before the current season gets under way.

We're seeing evidence of 'binge' TV viewers, largely thanks to DVRs and streaming services. Nearly equal numbers are using on-demand services through cable or satellite (41%) and through Netflix or Hulu streaming (40%), with a slightly smaller number through DVRs (37%). If you add in the other streaming services, the number balloons.

But here's the interesting part.

We're faced with such an embarrassment of programming riches that we don't have time for it all. A recent Motorola Mobility report found that 41% of Americans (36% globally) don't watch all of their recorded content. That's right. They don't even view the very stuff they're interested in. Imagine how that affects marketers who are trying to get people to pay attention to products and content they're not interested in.

Of course, for the television content that is viewed, there's no guarantee that people are paying such close attention to that, either. There is a variety of social media multitasking that goes on while people are watching TV (via multiple screens). But I suppose we can be at least a bit comforted that 40% of mobile searches are performed while watching television.

The bottom line: the content game is hard. It's even harder when you're chasing it across multiple platforms for an audience that is poised to zap your message with the flick of the fast-forward button.