Restoring Faith in Humanity - Together

Watching the events unfold in Boston yesterday was horrific. As a former resident of the city - and as one who had previously volunteered at the finish line of the Boston Marathon - it was especially difficult to experience.

As with any tragic event that plays out in the media, there is always fear, speculation, uncertainty and loose facts running rampant.

What happened thanks in part to digital and social media was fascinating to watch as we as a collective nation were thrust into an uncomfortable situation together. The immediacy of the information flowing in, particularly because of visual storytelling, was in some ways jarring, in that we were able to learn about the raw information immediately. But it was also comforting, as we were sharing those images and reactions to them together, as a shared experience.

In some cases, it meant graphic images and gruesome details, but it also meant that people were finding out about loved ones and their condition perhaps much sooner than they otherwise would have. For example, I noticed helpful netizens pointing out that interested parties could tell if their friends and loved ones in the race had crossed the finish line yet by going to http://raceday.baa.org/individual.html. And not too long after that, Google put together a Person Finder for the Boston Marathon Explosions.

In terms of news, Reuters went to live coverage, using tweets, photos and embedded video to tell the story as it was rolling out and The Atlantic Wire used a variety of content to share the events as well.

In fact it was there that I saw Vine used for significant breaking news for the first time. Six seconds of video tells more than enough:

Through it all, there were conflicting reports of how many people were injured, the number of bombs, and other facts. It quickly became apparent that there was one definitive and authoritative source of information: the @Boston_Police Twitter account, personally staffed for most of the day by the bureau chief of public information for the BPD, @CherylFiandaca. She and her team were providing updates to inform and clarify, such as:

And then they turned to the public for help as the incident turned from rescue to investigation: 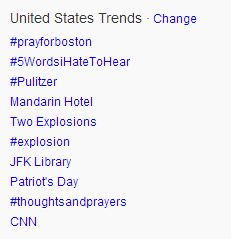 When I first noticed them, the account had about 88,000 followers; it currently stands at over 115,000. With the way they engaged, informed and united around a single hashtag - one that didn't get confused with any of the public hashtags or trending topics - the BPD gave people a reason to follow them and a clear flow of information.

And this was another thing that happened quickly: within the hour, 8 of the 10 top trending topics on Twitter were related to the event. The speed with which news and cultural touchpoints are shared online outstrips traditional media, although we saw a very interesting mingling of the two in the aftermath of this terrorist event.

But amid all of the shock and despair, there was a sense of community and humanity that formed. Some of the first reports were of compassionate runners themselves:


USA Today actually captured a number of instances of kindness that spread throughout the Back Bay, as runners and observers alike banded together.

The kindness wasn't just on the ground in Boston; Mark Drapeau (@cheeky_geeky) noted on Twitter that Reddit was aggregating posts related to the Marathon events, in order to help make sense of it all:


About 45 minutes in, I thought it was time to remind brands that "regularly scheduled content" might need to take the back burner when an event of this magnitude affects us as a nation:

If you manage social media for a brand, this would be a good time to suspend any additional posts for the day.
— Scott Monty (@ScottMonty) April 15, 2013

Some brands were caught offguard, as they had automated tweets (!) scheduled, but others were caught up in ad units that were running. For example, Wendys was called out for a sponsored tweet, but they quickly reacted and let fans know that they were working on pulling it down:

If this post seems a little disjointed and all over the place, there's a reason for that. Not only was the coverage and content, but I was too. I can't describe how vividly I remember Boston and what a fondness it holds in my heart. To see it ripped apart like this from some 700 miles away was very difficult. It was like a mini replay of September 11 (for which I was in Boston), with that sense of helplessness and despair over the evil that some humans bring to this world.

Here's a post I found on Facebook last evening - a post from comedian Patton Oswalt, no less. I think he sums up what many of us might be thinking in a raw and forceful way. And from the number of likes and shares, I think it's safe to say that he's got plenty of support.

But I was wrong. I don't know what's going to be revealed to be behind all of this mayhem. One human insect or a poisonous mass of broken sociopaths.

But here's what I DO know. If it's one person or a HUNDRED people, that number is not even a fraction of a fraction of a fraction of a percent of the population on this planet. You watch the videos of the carnage and there are people running TOWARDS the destruction to help out. (Thanks FAKE Gallery founder and owner Paul Kozlowski for pointing this out to me). This is a giant planet and we're lucky to live on it but there are prices and penalties incurred for the daily miracle of existence. One of them is, every once in awhile, the wiring of a tiny sliver of the species gets snarled and they're pointed towards darkness.

But the vast majority stands against that darkness and, like white blood cells attacking a virus, they dilute and weaken and eventually wash away the evil doers and, more importantly, the damage they wreak. This is beyond religion or creed or nation. We would not be here if humanity were inherently evil. We'd have eaten ourselves alive long ago.

So when you spot violence, or bigotry, or intolerance or fear or just garden-variety misogyny, hatred or ignorance, just look it in the eye and think, "The good outnumber you, and we always will."


In a way, his emotional appeal reminded me of something I posted on Google+ in the wake of the Newtown shootings in December. In this case, it was from a more gentle soul, who had a similar sentiment about such difficult events. Mr. Rogers had a way with words that always seemed to calm and reassure us.

"When I was a boy and I would see scary things in the news, my mother would say to me, "Look for the helpers. You will always find people who are helping." To this day, especially in times of "disaster," I remember my mother's words and I am always comforted by realizing that there are still so many helpers – so many caring people in this world."       - Fred Rogers


God bless the people of Boston and the many good people around the world who are showing support. How sad it is that it took a senseless act like this to bring us closer together, but how inspiring that there are heroes and helpers out there, making a great example for the children everywhere.

Update (4/17/2013): Stephen Colbert had this to say in his intro to The Colbert Report last night:

--
Note: this post was not written to exploit the tragedy, but to offer some observations on what I observed during a nationally and personally trying day. I offer my deepest condolences to the families of those who were killed or injured in yesterday's senseless tragedy