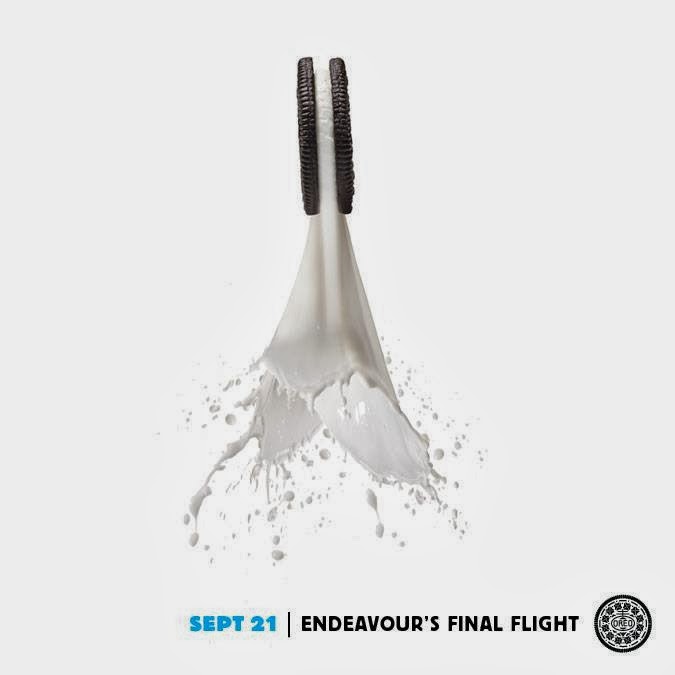 Your marketing team and agency has just been put on notice.

Over the last 100 days, Kraft Food's Oreo brand has been sharing a steady stream of some of the most creative and engaging content I've ever seen. If you haven't been following the Oreo Daily Twist, you've been missing out on a goldmine of creativity, humor and cultural awareness.

The campaign was designed as a way to help celebrate the 100th anniversary of Oreo cookies (which themselves were modeled after Hydrox) in a way that could effectively reach the nearly 28 million Facebook fans of the chocolate cookie. And in a very unusual move, four separate agencies aligned to form a truly integrated team to allow the campaign to roll out: DraftFCB, 360i, Weber Shandwick, and MediaVest.

To say that the task was daunting is putting it mildly, to say the least. From June 25 to October 2, the creatives had to determine a way to develop 100 individual pieces of content that took into account standing celebrations, events and more - and had to do so in a way that incorporated the product. As if that wasn't enough, the team also worked to develop creative IN REAL TIME in response to events that were happening in the world around us.

Here's a slideshow of the complete 100 "twists": 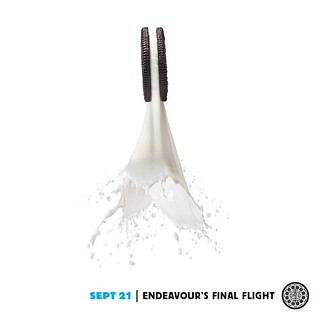 As the campaign neared its conclusion, it was announced that the final image in the series would be crowdsourced. The New York Times covered it, noting the construction of a pop-up agency in the middle of Times Square, where crowds could submit and vote on concepts. Fans watched it all roll out live in the agency as the teams created the final image (which was a hand imprint noting the anniversary of the first high-five).

Aside from the mechanics of putting real-time content together and the logistics of a pop-up shop in a busy city setting, my fascination is with the content itself.

When you look at every image that was created for the effort, not a single one asks people what they think of an Oreo flavor or feature or cajoles them to go buy Oreos. The content is there to make people feel good and to give them something that they'd be eager to share.

Think about that for a moment.

How many times to you or someone on your team create a post for Facebook that reads something like, "We're excited to show our new ______ with super new feature X that allows you to _____ better than ever before." Or "Have you tried our new ______ yet? Like this post if you've heard about feature Y."

Now who in his right mind is going to want to share a post like that with his friends? We need to stop thinking like message-driven marketers and more like human beings. We need to create content that fits into the mindset of the consumer, not incessantly force the consumer to listen to our message all the time.

I shared this thought with my CMO recently, and his response (rightly so) was, "What do you think we're in business to do?"

Of course we need to sell products, but we're not going to do it by being annoying, interruptive, or loud. We're going to do it because people will identify with us, they'll think our content is cool (see above), they'll share it, and the positive brand association will make more people think about us. They'll trust us because we'll have their best interests in mind, not ours.

Put another way, if you've ever been on a date with someone and all they do is talk about themselves, are you likely to want to see them again? I didn't think so.

So if we need to dial back on the chest thumping and "hey-look-at me" posts, how are we to think about this new era of content? It turns out that it's not that hard. It ultimately boils down to human nature - a common bond that unites every one of us.

Last month, Infinigraph posted an image on Facebook that made note of the 10 Types of Content We All Crave: 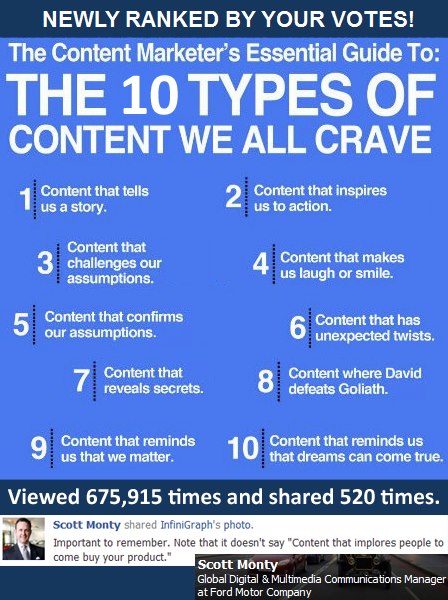 When we create this kind of content, we need to be aware of how it lives across platforms, how easy it is to share, and how different and unique it is, and how it captures the imagination of our intended audience. It really comes down to storytelling.

Storytelling at its very core is content with a beginning, middle and end, and is the use of content to create relationships. To do that, we need to set expectations and we need to be consistent in our efforts. Done repeatedly over time, we'll build relationships. Relationships beget trust and trust begets loyalty.

Thanks to the efforts of Oreo, a new standard has been set for marketers. I hope you're paying attention.