From Social Sharing to Creative Collaboration 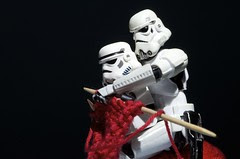 Editor's note: the following is a guest post by Charles Harrow, on behalf of Screenmail.

A Sharing Economy
The early part of the 21st century might be called the age of social media--though perhaps the era of sharing might be an even more appropriate description. Whatever we choose to call it though, there's little question that we've entered into a "sharing economy," creating an economic landscape wherein both for-profit businesses and non-profit organizations leverage the power of content sharing, to the greatest extent possible, to get the word out about their products, services, programs, and promotions.

While young people have grown up in this environment and therefore know no other, many in the older generation are embracing it, as well. For young and old, however, it's a matter of keeping up with technology and the increasingly complex capacities it confers on the average person--a reality that has totally changed the status quo. Those who are willing to accept the new business paradigm are rewarded with greater success. Those who aren't are simply left behind. From advertising to customer service and from human resources to corporate giving, news travels at the speed of now--and the conduit through which it travels is the group that used to be quaintly referred to as "the common people."

The Power of Collaborative Consumption
The personal arena is by no means exempt from this modern paradigm shift, however. Consumerism has changed drastically during this age of social sharing, with the balance of power shifting noticeably from big business to the person on the street. We've become collaborative consumers, sharing with one another, across a multitude of networks, the best and worst product deals, the most competent and incompetent services, the good, the bad, and the ugly treatment we've received from the companies with which we've dealt, and a whole array of other critical factors that shape the consumer experience--and dictate the profits of large corporations. To say that the modern consumer has a voice would be a gross understatement.

Technological Shift
As other subtle and not-so-subtle shifts take place in both technology and attitude, still another move appears to be occurring. The collaborative mindset is gradually beginning to be applied to production and not simply to consumption. And technological tools like ScreenMail are helping fuel the change. For those who may not know it already, ScreenMail is a new SaaS (software as a service) platform that allows users to send each other ScreenMails: videos that capture what's happening on their computer screens. It's a way of visually recording their desktops and adding a voice recording via microphone to explain to recipients whatever additional information may be needed to complete the picture.

Some current and potential uses for ScreenMail technology:

Based on the above uses and capabilities of the technology behind ScreenMail, it seems obvious that other, more comprehensive uses are on the horizon. For example, what's to prevent the entire development phase of a piece of software from being carried out collaboratively via this remote technology, with developers sending ScreenMails of each iteration of the product's development to one another for feedback and creative input as they view the software in action via video on their computer screens?

A Move toward Collaborative Production?
Tools such as these can potentially make it possible for the greatest minds within a field to collaborate in ways they've never been able to before--regardless of physical distance and regardless of scheduling conflicts that would normally present obstacles to the collaboration--creating a potential reality wherein we can reach previously unimaginable heights of advancement. This would, of course, mean that whereas our current technological era leans more toward individual discovery and implementation, emerging technologies might soon eclipse this individualistic operational style, foreshadowing a move into a more interdependent age and mode of creation--one that's more in line with the atmosphere of collaborative consumption in which we've grown so accustomed to operating in recent years.

Is this a foreshadowing of what's to come in our rapidly advancing technological age? It doesn't appear to be outside the realm of possibility and, in fact, thanks to the technology that appears able to accomplish it, which seems to be slipping right into place, it seems likely that this new collaborative production method will soon become a normal part of the product development process.

The increased ability to collaborate through technology, bringing together the most brilliant minds to pool their knowledge and work cooperatively to solve problems and create new realities, looks from this vantage point as if it will soon begin expanding our horizons and opening brand new vistas of discovery that will take us boldly into the future.

What exciting new realities do you think the next stage in collaborative production holds in store?