You've probably heard that Pinterest is here and in a big way. If you're not already familiar with it, take a look and see if you can understand what the fuss is all about. The site has been around for a couple of years but only recently took off.

I've been wanting to write something about Pinterest for the last 2-3 weeks, but haven't been able to because of a grueling work schedule, and rather than simply provide you an introduction to the site, I thought I would take a sampling of articles that have been written about it and see if we can explore some topics related to Pinterest instead.

Why It Works
And really, this approach is parallel to the way I think Pinterest is different. Simply stated, the site is a visual bookmarking tool. There are a number of sites and platforms that serve as social bookmarking tools: Delicious is probably the best known one; StumbleUpon, Reddit and Digg are variations on the concept of the merging of discovery, serendipity and search, with tagging as the common thread that runs through each.

But Pinterest has taken to to another level that appeals to some more basic human needs: the ability to browse content in a minimalist, visual way (see "How Pinterest Is Changing Web Design Forever"); and the notion that when we encounter strangers (either online or offline), we make a connection through a common interest and the sharing of that interest.

But what's more sticky here than with many of the other sites out there is that in addition to being simple to use and visual in nature, users have the ability to follow individual boards rather than the entire stream of users. This is not to be underestimated, as user experience across the web is changing to accommodate custom content delivery - busy people what only what's relevant to them. And at the same time, they want serendipitous discovery so they can still find new and different things that inspire them. Jay Baer looks at some of these reasons on Convince and Convert. I've seen it at work personally, as one of my pins has been "repinned" some 11,500 times.

And it must be working more widely, for one analyst recently observed that he has seen "some of the strongest user engagement, retention, and virality metrics" there and Bessemer Ventures is bullish on Pinterest.

He Said / She Said 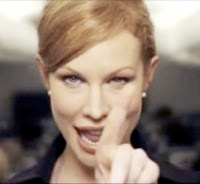 "But wait," I hear you saying, "isn't Pinterest for women?" Shame on you. While it's true that women make up the majority of users (some 70-80%  as of the end of January 2012), as I wrote above, it's about universal human nature and how we connect with each other. For a healthy dose of reality and a digital dope slap on this topic, see Kristy Sammis' article on the Clever Girls Collective, "How to Stop Being a Pinterest Sexist." Even Lance Ulanoff, the editor of Mashable, admits his addiction, noting that when he went beyond the people he was following and looked deeper by categories that appealed to him, a new world opened up to him.

And yet, we're beginning to see a rise in competitors to Pinterest, some specifically with a male slant. Gentlemint is probably the most well known; another is Dartitup. You can even check out "The Bro's Guide to Pinterest," with suggestions as to how to understand and leverage Pinterest if you're looking for a male demographic on there.

Whether or not these other sites are able to match the momentum of Pinterest, the reason we're seeing the competitors is again because the need to share and to bond around common interests is something that humans - both men and women - have baked into our DNA. Did you ever participate in "Show and Tell" in a classroom when you were a child? It's the same thing, only it's happening online. As Clay Shirky recently said during a TED Talk: "We are in a world where most American citizens over the age of 12 share things with each other online."

Now, that's not to say that there aren't differences between how men and women shop online - particularly with smartphones. A recent Comscore study has shown that women are more likely to take a photo of an image and share it, while men are more likely to use their smartphones to find information, either by scanning a barcode or researching product features.

From Show and Tell to Show and Sell
There are a couple of underlying questions in all of this excitement. The first is about Pinterest's business model - how will they make money? They've backed off on the affiliate linking practice that became controversial (or not, depending on who you ask) earlier in month, and according to Bessemer, there are a number of ways for them to make money.

The other question that's being answered daily by brands jumping into the fray is, "how can I use Pinterest for my business?" Of course it depends on the type of business you have and what you wish to give as an experience. Thomas Hawk has an excellent perspective on Pinterest for photographers and artists, focusing on the need to share rather than hoard content.

There are some good resources out there with a number of great examples for businesses. Some of them include:

To me, the brands that will be successful here are the ones that go beyond just using Pinterest as a storefront and use it to unite people around passion points. And of course, you'll want to use Pinterest to drive sales - particularly if you're in the e-commerce business. But think creatively about how you construct boards: rather than just listing products, center around a theme. Neiman Marcus and Whole Foods do this particularly well: 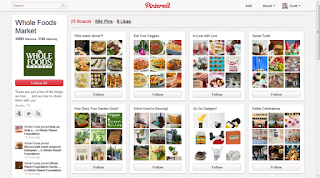 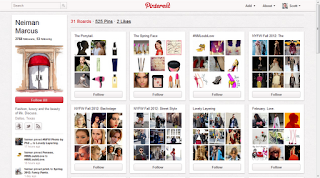 Pinterest is bound to become a powerful engine for e-commerce, more so than the promise of "F-commerce" from Facebook, I think. The challenge with the Facebook model (for the most part) is that it required users to have the storefront experience in a custom tab on each company's Facebook page - not necessarily something that translates when you're using a mobile version of Facebook on your smartphone (remember the above statistic about shopping and smartphone use?). And just this week according to Bloomberg, there's been a noted shuttering of storefronts on Facebook, largely due to lack of use.

With Pinterest, because the mobile versions are just as simple as the web version - and because they're based on image sharing (again, see above), it's more likely that we'll see more retail driven activity.


So that's my current view on some of the things happening with Pinterest. What do you think? Are you there yet? Do you see the value or would you care to debate it? Drop a comment in below. And if you'd like to connect on Pinterest, you can follow me here:

If you need an invitation (as it's still in beta), let me know.