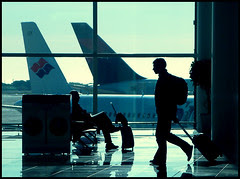 If you're like me, you spend a good deal of time on the road. Whether it's at an airport, on a train or in a car, you're mobile and your digital life is mobile too.

The pervasiveness of tablets and smartphones (in addition to the already ubiquitous laptop) is growing daily. Just this week, Apple announced that it sold 37 million iPhones and 15.4 million iPads in the fourth quarter of 2011 alone. It means that more of us are doing things on the web (or mobile web, as the case may be) while we're on the go, and there are certain things those of us in the digital world look for when we travel - at least with regard to infrastructure.

The Airlines
To my knowledge, Southwest was the first airline (or at least the most prominent early on) to get involved with social media. Their blog, Nuts About Southwest, has been a perennial leader in the corporate blogging space. They've made great use of Flickr, YouTube, Twitter, Facebook and more and have always led with a very human and very customer-centric approach.

JetBlue made a name for itself in the social media space after a difficult travel situation thanks to severe winter weather in 2007. Their CEO David Neeleman was direct and honest in his approach, the video of him was sincere and emotional, and JetBlue made it clear that it put customers first. And to think that my colleague Morgan Johnston at JetBlue had started his job on that very day...

Delta got a late start in social media (and was the subject of its fair share of complaints, including a dramatic rant ), but now has @Delta and @DeltaAssist looking after its customers on Twitter. Not to mention some personal interaction from a certain member of the crew from their famous safety video.


That finger wag gets me every time.

The other airline that's going above and beyond in social media is Virgin America. Based out of Silicon Valley, they're in the thick of the action from a technology standpoint. And their use of Groupon, Loopt, Foursquare and more prove it. But their always-on monitoring is essential when it comes to catching consumer complaints, especially after their switch to a new reservation system last year.

Overall, customers want interaction - they want to be heard, certainly, but they also want action - when they take to Twitter to voice a concern. According to an eMarketer article, the expectation that a company will respond increases by age cohort from 38% of 18-24 year-olds all the way up to 65% of those in the 55+ age category. And it clearly matters in terms of satisfaction:

Staying Powered - and Connected
I've been in the unfortunate circumstance of leaving for a trip without power cord for a device. There are two points of good news: many times, you can charge your phone directly from your laptop using a USB port; and quite often, the hotel will have a power cord for your phone that you can borrow from their lost and found collection (I was once told by a concierge that phone cords are like currency at most hotels). 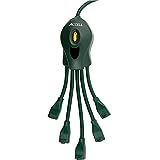 There are a few gadgets that I'd recommend as well. If you're travelling internationally, it's essential to have an all-in-one adapter that has attachments for every major country's electrical sockets. And because the hotel where you're staying or the airport may not have many readily available sockets to charge your laptop, phone, tablet, etc., it's handy to have a cord with 4 outlets, an all-in-one charging station, or even a PowerSquid that will allow up to 5 others to connect. You'll be the most popular person at the airport! (Note on all of the links in this paragraph: http://cmp.ly/5).

Then again, a number of airports have recognized that passengers travel with gadgets and need places to charge.

If you happen to have a non-3G iPad or a laptop without an air card, you depend on local wi-fi networks for connectivity. I've been in my share of airports that have had plenty of network access, but I didn't want to spring for a Boingo account to get connected. For that reason, it's helpful to know which airports have free wi-fi. Here's a quick list for your reference:


But it goes farther than wi-fi and charging stations. FareCompare has developed a list of the top 12 airports for social media power users, with a list of the top airports that are also known to take good care of their customers. I've reproduced the table here.

The Airports
I've had experience with some airports that are downright personal. For example, I traveled to Kansas City last year and was pleasantly surprised at the greeting and send-off that I got from the Kansas City International Airport (@KCIAirport) on Twitter:

Followed by a warm greeting waiting for me at home (@DTWeetin):

When you're travel-worn and checking in on Foursquare or commenting on a queue, sometimes it's heartening to realize that there are teams of people looking out for you. For example, Logan International Airport (BOS) in Boston has a team of five people handling their social media; @LAX_Official gives travelers in Los Angeles tips, newsletter and other helpful information. For a roster of over 130 airports on Twitter, see @Kayak's list.


What's your experience with regard to social media and travel? Do you have any other examples of airlines, airports or other entities who get it right, campaigns that resonated with you, or personal touches that made the difference in an otherwise difficult circumstance? Please leave a comment with your input.