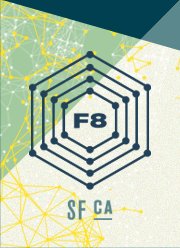 At the f8 developer conference today, Facebook unveiled some major platform changes that will profoundly affect how we use and interact with the site. In his keynote, Mark Zuckerberg said that Facebook's job is to "make it the best way to express who you are." And with a company whose vision is to make the world more open and connected, it's absolutely essential to make it feel like a place you prefer to spend time.

In doing so, Facebook has introduced the Timeline - something of an online scrapbook - that better categorizes and highlights your actions, rather than the current Wall of everything. The new system will summarize your events and actions over time, so that only the significant things remain. New Reports apps will group things together in a sensible way and the entire experience will be more visual.

There are three major concepts that make up the new Timeline: all of your stories, all of your apps and a new way to express who you are. Here's the video that Facebook released to help you see how Timeline will transform the thing that you share:

While the more significant things will be grouped into these apps, your less interesting updates and actions - Zuckerberg called them "lightweight actions" - will be visible through the Ticker on the sidebar. But what's even more interesting (to me, at least) is that there will be a social aspect to the apps: if you visit a friend's Timeline and see an app that interests you, you'll be able to instantly put it on your own.

There's a New App in Town
The significant advance on the app front is that the Open Graph will allow for "a new class of apps," according to Facebook. These apps will all have three things in common:


As you can imagine the "frictionless experiences" will range in their nature. Currently, you can only "like" something on Facebook. But the new Open Graph apps will essentially function like verbs. Anything you can do can become an app. For example, your timeline will show that you "Read" a book, "Watched" a movie, "Listened" to a song, "Ate" at a restaurant, etc. The possibilities are endless. As Robert Scoble said to some venture capitalists last week, "you are now funding verb companies."

The New Timeline
So, let's take a look at how the Timeline works and what comprises it. First, if you haven't already, please take a look at the Introducing Timeline page on Facebook. It beings with your Cover - a large image that acts as something of a digital welcome mat for your visitors. It's meant to be the first impression that you make. Next up is Stories - the photos, posts and events that are important in your life. You can control which are shown and highlighted by starring or hiding content. And finally, Apps tell the world about the things that you regularly do - those verbs that I mentioned above.

There are already a number of pundits who are analyzing, summarizing and hypothesizing about the changes. My role here isn't to do any of that, but rather to share with you what the changes are and why you need to be aware of them. Here are some good backgrounders to look at for more detail:
Here's what my new Timeline looks like: 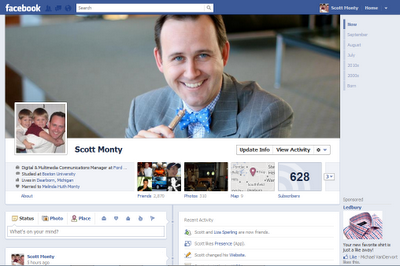 Based on what I've observed so far, here's a major concern I have for any Facebook Pages (i.e., businesses or brands): the casual behavior of fans around your Page and your content (liking something or commenting on something) will now become relegated to the sidebar Ticker. For the average user (who has between 130-170 friends), it may not be a big deal; but for anyone over that number, you'll see a constantly updating stream of actions that are less meaningful now because of the lack of context of each. And there have already been lots of conversations about how to kill the Ticker.

At this time, it seems that Facebook is focusing more on relationships between individuals (rightfully so, as that's the main reason the platform exists). But even as AllFacebook.com wondered "Does Facebook's News Feed Punish Advertisers (Yet)?" you have to wonder how Pages will fare. So much of the activity there fed into individuals' news feeds; now that will be relegated to the Ticker. It sounds like it's a win for Facebook in terms of getting brands to step up to the table with some advertising budgets.

In my opinion, the more forward-thinking brands must do one or more of these three things:
Whew!

That's a lot of information in one post (and let's not forget the Google+ update two days ago). The new interface is probably overwhelming for the average user. In fact, one of my friends saw the video above and said, "OMG I am going to have to take a 300 level course in Facebook..."

What do you think of the new changes afoot at Facebook? Likely to keep you more engaged, or something a little to extreme for you? How do you think businesses will fare in all of this?
--