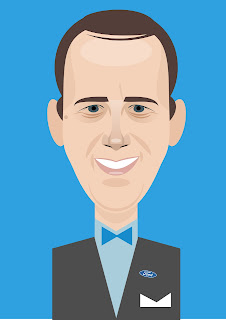 #ProBook is the brainchild of Joe Chernov and the team at Eloqua and JESS3 - a team I've had the privilege of working with previously on this site. They were responsible for The Social Media Playbook, the Blog Tree, and a little cartoon about hashtags. And yes, it can now be revealed that the avatar I've been using on Facebook was in fact tied to this project.
While the first ebook was focused on tools to help you master social media, this one is more personality-based. To be clear, I'm not saying that it's one of those insular, narcissistic, same-old-recycled-list-of-webutants kind of a book. But it uses people to convey broader messages - people with great experience actually doing the very kind of work they're writing about. Not just those providing thought leadership, but "do leadership," as the epilogue points out.
One of those people is Steve Rubel, the EVP of Global Strategy and Insights at Edelman Digital (and someone I've been following since my earliest days in this industry), who writes:

A few years ago at a 2007 Paley Center confab, Cisco executive Daniel Scheinman predicted that, in the future, content would find us through our social networks, rather than requiring us to seek it out.
Flash forward four years later and there’s no doubt he was right. Increasingly relevant information - whether it be from brands, the media or individuals - is finding us through our
social networks. However, with everyone and their mother creating content, standing out is becoming only more challenging.
Enter this guide. Eloqua and JESS3 have once again pulled together an allstar team to share their best practices in social media. However, talk is one thing. Action is another.
Thankfully, the the team proved it had the know-how to stand out in an age of too much content and not enough time...With this resource, it’s clear that you’re in good hands to navigate the challenges.

Some of the hands that Steve alludes to include:
Just for fun, the book is interspersed with more personal interviews as you're invited to go on "A Day in the Life Of..."
Leslie Bradshaw wraps everything up nicely with an Epilogue that describes the inspiration for the project and those involved behind the scenes, before heading into a very comprehensive index that gives readers websites and Twitter handles of every entity mentioned in the book. Even better, you can follow all of those with this handy Twitter list. There's also a Flickr set with everyone's avatar, in case you'd like to see them a little more closely.
As usual, Eloqua and JESS3 have published The Social Media ProBook under a Creative Commons license which allows you to redistribute, share or host it, provided that you don't change it in any way. They've made it available as a downloadable PDF; I've embedded it here as a Scribd document:
Social Media #ProBook
Please share this post and this book with anyone you think could use it. What was the most helpful part of the book to you?
Related link: Eloqua's Social ProBook
--
Posted by Scott Monty
Labels: ebook
at 9:00 AM