The following is a guest post from Nick Jerome.

QR codes, a.k.a. Quick Response codes, are a useful way to encourage individuals to interact with a product or service. They can be used for a variety of engagement tactics including driving consumers to an ecommerce landing page, providing a coupon or giving in-depth product information. 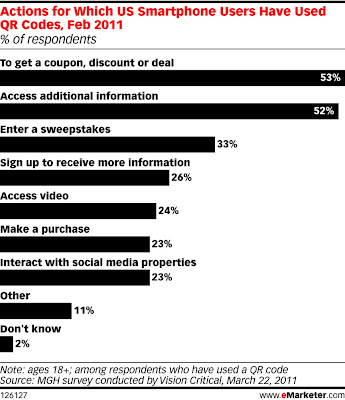 As you can see, getting a coupon or accessing additional information are the two main uses for QR codes. The study also showed one-third of all smartphone users have scanned a QR code and two-thirds have seen one. Users who were aware of QR codes tended to be more educated and affluent and the largest majority of users were ages 35-54. As QR codes become more common, awareness is certain to grow in most demographics.

Before employing a QR code in any campaign, make sure you have covered all the basics:


About the Author
Nick Jerome is a marketing services manager at FASTSIGNS®, a visual communications services provider with more than 550 locations around the world.
--
Posted by Scott Monty
Labels: guest post, Marketing, mobile, trends
at 4:05 PM