The Gamification of Social Media

Empire Avenue is the new game in town. It sits squarely in the social networking space, but it has a different twist - one from which I think businesses may be able to gain valuable insights, all while allowing people to enjoy themselves.

What is it?
Essentially, it is a rewards system that makes what we already do on the web   - create and share content - fun by making it a stock market-like atmosphere. You can earn money (their currency is "Eaves") by buying other people and you can see your own worth rise by getting other people to invest in you. When tied to other accounts such as Twitter, Facebook, Flickr, YouTube, LinkedIn and blogs, your net worth rises based on the content you either create or share. But like the other sites, it's also a social network itself. It's a chance to connect and brainstorm with others by finding affinity groups ("Communities") within Empire Avenue. 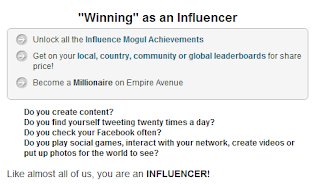 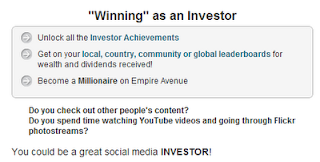 While the world may be defined in these two separate buckets - creators and consumers - for most of us in the social space, it's not an either/or proposition; we're most likely creating and consuming. But if you're looking for a hot tip on who's a mover and shaker and is worthy of your investment, I'd recommend these two points:

One point of interest: you can keep your activity to Empire Avenue if you like (investing, giving "Shout Outs," buying items), but the developers have created a way to make it more than just that: the rewards that you get for EA activity are limited in nature (dividends, currency for taking certain actions, etc.). By linking your social activity from other sites, you see your net worth rise more quickly. The main way the system does this is by using what's known as gamification. Yes, that's an actual term. By rewarding people with positive reinforcement for actions taken - much like Foursquare has become synonymous with - Empire Avenue uses a system of Achievements to recognize your progress. Below are some examples. 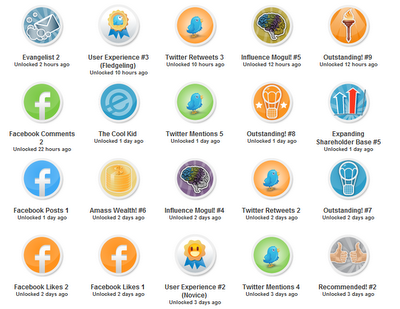 For a recent and in-depth look at how game theory is affecting the social and mobile space, take a look at what Brian Solis had to say about it ("The Games Businesses Play with Customers").

Is there more than just fun and games?
But let's get beyond the surface and look at the practical nature of what Empire Avenue has to offer. Robert Scoble, after interviewing the CEO Duleepa Wijayawardhana (DUPS), determined that one side feature he discovered was that it creates a way to better determine who's actually providing value in our networks.

Empire Avenue themselves have been pretty smart about their ecosystem, as they've already built in a revenue stream: there's The Shop, where people can purchase Luxury items such as airplanes, homes, boats, etc. For those who really want to rise to the top quickly, they can purchase Eaves with real cash. And I definitely see the potential for brands to enter the fray and sponsor items that they can offer for purchase.

Why I think Empire Avenue is onto something
Other sites such as Friendfeed, Quora or Klout all give us some information or let us interact with each other in some way, but they're each limited. To me, Empire Avenue is a much more holistic, three-dimensional system that is comprised of all of the digital grunts we get on Facebook and Twitter, as well as deeper forum-related discussions via the Communities, an aggregated stream of their activity, and - most importantly - peers' ratings of influence and effectiveness (via buys and sells). To see a really interesting conversation that Caleb Storkey had with a few influentials about this topic, check out his post.

That's a much more realistic and informative way to gauge influence, rather than a simple one-dimensional score such as Klout. I could see companies like Radian6 (recently acquired by SalesForce.com) acquiring Empire Avenue as an adjunct to their business. Think of the value they could add by giving clients a dashboard in which they could actively participate rather than simply consume information about the influencers they're trying to reach.

How do brands get involved?
While this may seem limited to individuals at this point, Empire Avenue does allow brands to get involved and has a separate business signup process. For well known brands, they lock down the stock symbol or brand name in order to preserve some semblance of order. We started accounts for Ford (FORD) and Lincoln (LINCOLN), linking our Facebook pages, YouTube channels and Twitter and Flickr accounts. We expect to add more content channels as we continue to explore the system. In the meantime, we've been lucky enough to see individuals investing in us, but we've also taken the important step of interacting with them (just as we do on every other social network) and we're investing in them as well. 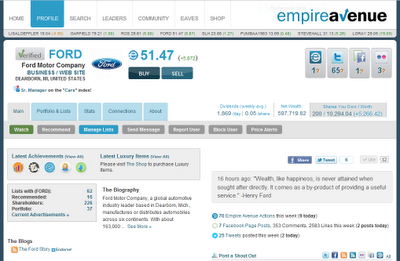 "Wealth, like happiness, is never attained when sought after directly.
It comes as a by-product of providing a useful service."
-Henry Ford

Other brands that have cropped up so far include Oreo, Sears, Audi and Applebees. Stay tuned as the gold rush begins. For a comprehensive roundup of other posts about this topic, as well as a set of recommendations and caveats for what it means for brands, please read - and then re-read - Jeremiah Owyang's post. And then take a look at Adriel Hampton's Game Mechanics blog.

I've just scratched the surface here; this is a very rich subject and I'll be interested to see how it plays out. We've seen other efforts fizzle out, but to me, this seems to have more potential. What do you think? Have you started an account yet?

Posted by Scott Monty
Labels: social networks, trends
at 2:15 AM