A Brief History of the Evolution of Social Technology 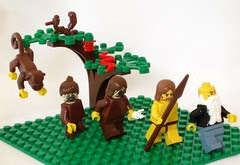 The following is a guest post from David Murton.

To truly appreciate social media and the ubiquitous nature of the Internet, the consumer must first remember the wireless networks' distant and humble beginnings. In the year 1888, Heinrich Rudolf Herz generated the world's first radio wave. A short six years later, it translated into telegraph signals that made long-distance communication possible.

Piggybacking on Herz' radio wave, Marchese Guglielmo Marconi translated the wave into a wireless signal that would make short-distance radio transmissions possible. Perfecting his technology, he was able to gradually increase the reach of his radio waves to 31 miles. Online communication schools credit his tenacity for truly realizing the potential of future radio wave technology.

During World War II, the use of radio wave transmissions as main means of communication hastened the further honing of the technology. Fast forwarding to 1970, Norman Abramson designed and tested the first wireless local area network, also known as the WLAN. From there, the race was on to make wireless technology smaller, better, faster and further reaching.

When the courts released the industrial, scientific and medical (ISM) radio bands for unlicensed usage in 1985, 802.11 technology created the industry standards for wireless product manufacture. It is from within this technology group that Vic Hayes tweaked the wireless Internet and would become known as the "father of Wi-Fi."

From there it was merely a hop, skip and jump to the fourth generation of cellular wireless (4G) standards that social media and wireless communication users enjoy today. Facebook aficionados in particular are known to congregate in hot spots that feature free access to the social network for laptops and cell phones.

The Impact on Communication Habits and Business
Harvard Business School proclaims social media and networking to be the "the most significant business development of 2010." Use of emails and phones has become a mobile endeavor that is no longer tied to the home- or office landline and stationary computer. Instead, it takes place while on the go, in transit, at the moment of opting to make a buying decision and also when actively pursuing business opportunities.

Entrepreneurs may have initially seen social media - most notably MySpace, Twitter and Facebook - as a playground for the younger generations. Yet as the true power of Mark Zuckerberg's Facebook creation began to shape business visibility in the online marketplace, companies had to scramble to make an appearance. Not surprisingly, less tech-savvy businesses were not as adept at presenting themselves to the consumer.

As a result, a good many businesses are now built around primarily the aspect of promoting other businesses through social media (and especially mobile social media) applications. Freelance writers, website builders and online marketers have grown a cottage industry around the function of introducing the world to small, midsized and larger businesses alike.

Using YouTube to transfer up-to-the minute information about events, protests and government responses to the entire world, 'sanctioned' local media outlets had no possibility to distort what was going on. Not only did social media shift the world's sympathies to be with the protesters, but when sharing pictures of what was happening, it was possible to motivate even the people within the countries to keep going and get even more people involved in the demonstrations.

Dispelling various incorrect claims made by the media, it became quickly apparent that the regimes of Tunisia and Egypt had failed, even as official liaisons denied any changes in power.

The Dark Side of Social Media
For all its benefits and the commercial advantages of social media applications, there is a decided downside to the mobility of the experience. For example, teenagers and even adults are spending a large portion of their days engaged in the virtual reality created by social media, which in turn affects school and work results. Who does not know someone who "just had to check their crops" before they wilted on Facebook's widely popular game Farmville?

Even more sinister is the peer pressure on teenagers to do "cool" things to show off, sometimes resulting in accidents, ill-advised meet-ups with predators and of course cyber-bullying by peers. There is a also an emerging culture that leads to a constant self-comparison with other social media users, especially by teenagers, resulting in possible psychological trauma and even depression. After all, it is difficult to not feel rejected if a friend or classmate fails to "like" a comment or suggestion.

What Awaits Us in the Near Future?
Trailblazers are busy making mobile devices faster, smaller and more powerful than ever. With the latest announcement of "brainwave to iPhone interface" from PLX XWave, wireless social media could soon become one with its users. These devices have the power to interpret brainwave activity and help shape the social media experience accordingly.

The already more commonplace text-to-speech and speech-to-text software -- along with the above mentioned mind-controlling device and simple headphones -- could even make hand held devices and laptops obsolete. Social media users may just opt to hear tweets/messages via a headphone and then post messages via speech-to-text technology.

Of course, this does precious little when it comes time for harvesting the crops on Farmville.

David Murton has been helping companies build and maintain their online relationships with customers since 2006. He is also a professional writer and blogger, with a particular interest in the open source Drupal platform. On a more personal note, David is an avid piano and accordion player, drawn especially to music of the classical and romantic periods.