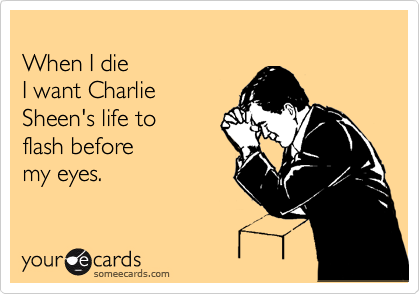 [Editor's note: I originally prepared this post before Charlie Sheen got on Twitter. I guess we don't have to wait any more - the real stuff is heads and shoulders above anything I could have come up with on my own.]

Almost four years ago (!) when Twitter began to hit a fever pitch coming out of SXSW Interactive, I found a post called What Would Jesus Twitter? Leaving aside that we now know the verb is "tweet," I attempted to jump-start a meme by creating my own (What Would Sherlock Holmes Twitter?) and tagged some other people to develop their own.

In the spirit of that, I jotted down a few thoughts on the plane back from Europe yesterday, blissfully unaware of the goings-on at the time.

Sheen's ascent on Twitter has been getting some headlines lately, including a Guinness World Record for "Fastest Time to Reach 1 Million Followers." With his recent barrage of surprise press appearances - which caused his publicist to resign - he is clearly taking the tactic of bringing his message directly to the public.

Is this a dangerous practice for someone whose stability is questionable? What role does or should a public relations effort play with such a volatile client who is annexing social media platforms to get his message out? Are there wider lessons for clients in crisis mode?

And just for fun: what other outrageous statements do you think we'll see from @CharlieSheen? Please leave a comment below.
Posted by Scott Monty
Labels: crisis, news, PR
at 1:13 PM