Earlier today, we witnessed something that was bound to happen: a brand used a controversial Twitter trending item to draw attention to itself. While Twitter's Promoted Trends allow brands to do this on a paid basis, today marks a turning point in what I would call predatory - if not tasteless - marketing tactics.

The bio on the @KennethCole Twitter account says "Thoughts that end in -KC are from me personally; others are behind the seams insights from my inspiring associates." Imagine my surprise then, when 'KC' himself posted the following:

The #Cairo hashtag has been used to document the news coming out of Egypt, amid unrest surrounding the continued dictatorship of Hosni Mubarak. The city has been in an uproar, with internet service being completely shut down. Twitter has been a valuable tool (via mobile device) in communicating during this crisis.
So imagine the surprise when Mr. Cole himself not only hijacked a hashtag, but trivialized the situation AND had enough foresight to create a custom bit.ly URL that included Cairo and his initials. Insensitive is an understatement. This was his follow-up:

If he'd like his brand to be part of a trending topic in the future, I'd suggest either picking a hashtag that aligns with his industry, or purchasing a Promoted Trend. I wonder if this was a glaring exception or if we'll see other marketers starting to take this leap?

Too little, too late?

Another postscript: David Polinchock shared this image with me from one of the Kenneth Cole stores. As it turns out, it was a prank played on the retailer. 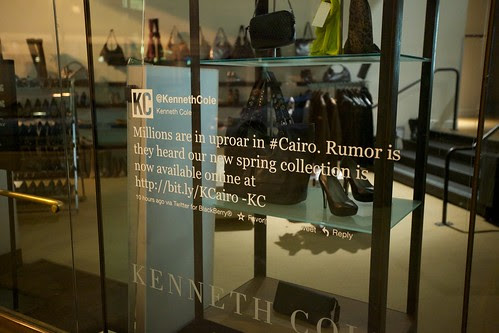