Well, it's finally here. After Facebook announced that they'd have an email solution that's not email, they've rolled it out to the public.

This morning, on my Facebook news feed, I saw the following message regarding Facebook's new Messages: 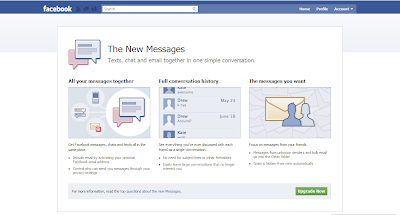 The new system combines your messages, texts and chats in one place so you don't have to try to remember how you communicated with your contacts in order to find what you're looking for. But it also does one other important thing - something that's a salvo at Google's Gmail: users are given the opportunity to get a Facebook email account.


There are many benefits to claiming your Facebook email address:


Personally, I"m a committed Gmail user, since my Google account integrates with many other platforms (such as Blogger, which this blog is written on), among others. I don't know if I'll give this a try or not.

But a little bit behind what's driving Facebook's decision to expand in this area. The New York Times discusses the decline of email in Gen Y, citing that the younger generation simply doesn't use email as much as they use IM and texting.

In November, Facebook announced the evolution of its messaging system and in a Fast Company article, Zuckerberg noted his inspiration for deciding on the software that would shape the communications style of whole generations:


"Whenever I get a chance to talk to high schoolers, I always want to ask them what kind of software they're using... So I asked them: What do you use for email? [And they answered,] 'Some of us use Gmail. Some of us use Yahoo. But we don’t really use email.' And I said, 'What do you mean you don’t use email? Everyone uses email.’ And they said, 'No. It’s too slow.'"

Using high schoolers as a focus group for the future of a multi-billion dollar company? While I understand that they're on the cutting edge of what's next and that they'll be the users of the future, my traditional self cringes a little about the notion of basing your success on the tastes and proclivities of such a young generation. Particularly when they have yet to fully grasp the habit of good writing, functional grammar, and the ability to fully express their thoughts.

My concern arises from this kicker from the Fast Company article:

The teens told Zuckerberg it was too much trouble to think of a subject and to compose a formal message.

Too much trouble to think of even a subject line? I weep for the future.

Posted by Scott Monty
Labels: facebook, news
at 9:37 AM