Twitter just launched a fresh new interface. I'm still getting used to it, but my initial reaction is that it's a strong improvement for users of the Twitter.com interface (which is about 70% of the users currently).


Here's the inside scoop on the background and making of the video from Forbes. 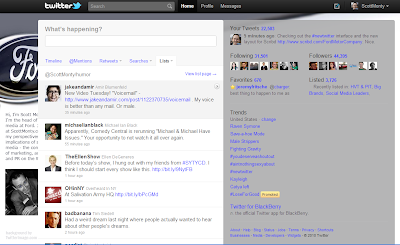 Probably the coolest part though, is the ability to preview content directly from the link, without having to leave your page. You can view photos, videos and more by clicking on the little arrow in the tweet box: 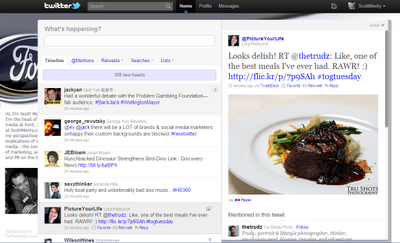 In addition, you can see mini-previews of profiles - number of followers, tweets, bio, etc. - directly from this page by hovering over any user.

The full details are available directly from Twitter. Overall, this is vast improvement that puts Twitter.com on a more level playing field with some of the more sophisticated desktop and mobile apps.

UPDATE: Here's a handy guide on how to customize your background in the New Twitter
Posted by Scott Monty
Labels: news, trends, Twitter
at 10:50 PM