From the Not Necessarily the News department: "Teens text more than adults" - or so went a headline from an e-newsletter from MarketingCharts that hit my inbox recently.

Check out the graph of the number of texts per day, adults vs. teens: 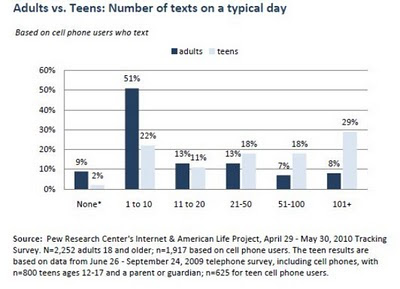 One other bit of information about texting: 57% noted that they received unwanted or spammy text messages.

What conclusions can marketers draw from this for the future?
First, this is the next generation of consumers, so we need to be prepared for them. While email may become more important to them in the workforce, they're still going to be tied to texting. The challenge is that texting is necessarily a one-to-one (or in some cases one-to-few) experience. There's very little room for interruptive ads.

Second, as you can see from that 57% figure, opting in is going to be extremely important; but even so, I believe that if we're taking up their valuable texting time by shooting them an SMS message, then it should be something that is worth their attention. Some categories or ideas to consider:
Probably one of my most favorite examples of this last category is the Facebook Sign Maker (and its Twitter counterpart) from the good folks at Blue Sky Factory. Text a simple phrase to a number and - voila! - you're a fan of a Facebook page. 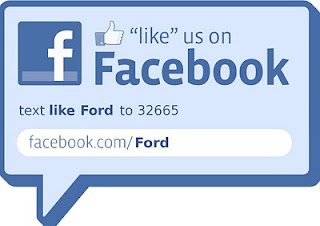 They've brought users from text messaging to Facebook fans via an outdoor/experiential sign. Remarkably effective and stunningly simple. Companies that begin to adopt this thinking understand how different marketing practices can leverage each other and that this is how life works - it's not about how we interact with the world around us, not how we simply focus on a single channel.

Here's one final nugget found in the Pew report: breaking some long-held stereotypes, men actually use the phone slightly more than women. Of the women surveyed, 53% make or receive five or fewer calls a day, while only 43% of men could say the same.

Maybe there are still a few surprises around after all.