If you haven't followed the Old Spice phenomenon from this week, you've missed out. It's a great example of a really strong performing viral campaign that harkens back to some of the classics like Subservient Chicken, Shave Everywhere, and Tea Partay.

It started on on television earlier this year with the following Old Spice commercial, "The Man Your Man Could Smell Like" (link for those of you in RSS readers):

(If you'd like to see how this was accomplished, Leo Laporte has a great interview with the agency.)

That commercial, first aired during the Super Bowl in early February, as of this week has garnered over 14 million views. And then the next commercial, "Old Spice: Questions", went up on YouTube:


Those ads are pretty funny to begin with and were passed around a good deal. But this week, Wieden + Kennedy, creators of the campaign for Procter & Gamble, took it to the next level. First, they began by promoting the latest video with a number of tweets, to ensure it was seen by many:

And then they fired a warning shot across the bow via the @OldSpice Twitter account, lest anyone question what they were up to: 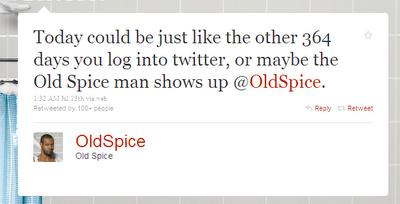 And what happened next made all the difference between the past and the future of viral campaigns. They could have easily engaged people on Twitter all day long and continued to push for views of their existing videos. But what Old Spice did was head and shoulders (if I can use another P&G product reference in a bad pun) above anything I've personally seen before.

The marketers targeted a handful of influencers to kick off the process - Kevin Rose (founder of Digg), Ellen Degeneres, Ashton Kutcher, The Huffington Post and others. Questions were requested and collected on a number of platforms: Twitter, the Old Spice Facebook page, YouTube, Reddit, 4Chan, blogs and Yahoo, to name a few. And then, during the course of the day, the questions were answered in near-real time via custom-made YouTube videos like this one:

At the end of the day, there were over 80 video responses made. W+K's creative director Iain Tait describes how they did it in an amazing behind-the-scenes look at the process on Read Write Web via an interview by Marshall Kirkpatrick called How the Old Spice Videos Are Being Made. Suffice it to say there was a high degree of coordination between the social media team and the creative/production team. Tait also discusses his view of influence in a Fast Company interview: The Team Who Made Old Spice Smell Good Again Reveals What's Behind Mustafa's Towel.

From what I can tell, the reasons it worked so well are summed up as follows:
So, this sets the bar high for the next major viral hit. Do you have any idea what's going to make the next one work well?